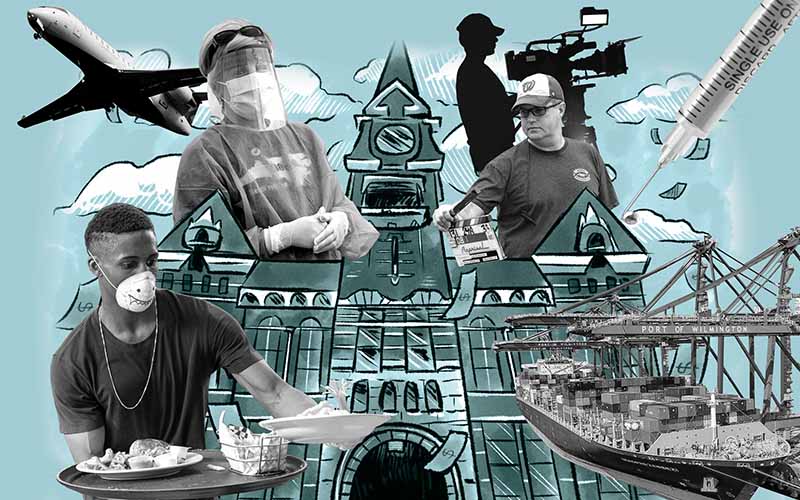 This year is expected to include some of the same themes as 2020, from what will become of the county’s proceeds from the sale of New Hanover Regional Medical Center to more COVID-19 news.
While COVID-19’s impact on the economy will remain a focus this year, other expected newsmakers in 2021 include New Hanover Regional Medical Center, the film industry and the Port of Wilmington.


Although 2020 is in the rearview, its effects are expected to linger with the potential for even rockier economic times this year.

“I am optimistic that in 2021 our small businesses will begin to see more of a recovery beginning in the third quarter of 2021 if we can turn the tide of the pandemic with the vaccine and a comprehensive strategy to eliminate it,” said Jerry Coleman, director of the Small Business Center at Cape Fear Community College, in December. “The next several months, however, will present significant challenges for small businesses. No doubt, we will lose more businesses as the pandemic surges [during the winter] and additional restrictions are instituted as a result.”

All along, certain sectors have been more vulnerable and will remain that way, he said.

“I am most concerned for our local hospitality/tourism [accommodation and food service] industry who have had to overcome multiple impacts of hurricanes in recent years and now the pandemic,” Coleman said. “More federal, state and local support is needed now to help small businesses over the next four to six months.”

Near the end of December, Congress passed a $900 billion economic stimulus bill that includes aid for small businesses.

When it comes to the way people do business, it’s not likely to completely go back to the way things used to be, said Adam Jones, regional economist with the University of North Carolina Wilmington. “But the evolutionary biology that led us to where we were probably hasn’t changed in nine months,” Jones said in December. “What’s really changed in nine months is the technological constraints on us. Now we have these new tools we can use to do those same things differently, and better.”


In a non-COVID development, the sale of New Hanover Regional Medical Center to Novant Health is expected to close sometime in the first half of the year, kicking off a transition to make NHRMC a regional center of care for the Winston- Salem-based buyer.

Meanwhile, N.C. Attorney General Josh Stein also is working on his review of the deal. As of last month, county officials said that they and NHRMC were in close contact with Stein’s office and had given the state officials all the information they requested but had not yet received a response.

Another moving part will be what to do with New Hanover County’s proceeds from selling the county-owned health system. Those funds, estimated to be $1.25 billion, are intended to go into an endowment overseen by a new community foundation.

Late last year, all 11 foundation members were announced, with Spence Broadhurst serving as board chair and Hannah Gage as vice chair.

A laundry list of things needs to be done to set up the endowment and eventually invest the proceeds. When county commissioners approved the sale and the endowment in October, they specified using earnings from the endowment to benefit areas in the county from education to health equity to community safety.

On the COVID-19 front, a vaccine arrived in December at NHRMC as cases climbed in the area. Health care workers were the first to receive the vaccine in New Hanover County, but wider distribution is expected this year.


Turning Up the Volume


The state’s ports had a change in leadership at the start of the year as N.C. Ports Executive Director Brian Clark assumed the post previously held by retired leader Paul Cozza.

Clark said in a briefing to the port authority in December that high port volumes across the U.S. in the latter part of last year could continue through the early part of 2021 – a surge in imports that’s due to a production rebound in Asia. That could continue to impact overall containers coming into ports along the East Coast and at the Port of Wilmington picking up pace from the blank sailings East Coast ports experienced from the toll the pandemic took on the global trade and the shipping industry in 2020.

N.C. Ports officials at the end of last year were monitoring whether Congress approves the Water Resources Development Act, which is slated to include the $834 million Wilmington Harbor Navigation Improvement Project, Clark said. If approved by Congress, however, there would still be 12 to 18 months of environmental studies.

The ports authority also aims to develop deeper relationships with local, regional and state economic development groups, as well as ocean carriers and potential customers in North Carolina, Clark said. Officials will work this year to identify strategic initiatives as N.C. Ports develops its next five-year strategic plan, he said. Port officials are also looking forward to the completion of some projects in its capital improvement plan, including a new gate complex and upgrades to its Terminal Operating System.


Wilmington experienced a strong 2020 for the film industry despite the pandemic.

Guy Gaster, director of the N.C. Film Office, said he believes there is more film business to come in the new year.

“We’re definitely seeing a very strong 2021 shaping up. There is interest [from studios] in doing projects across the state, and there are some reality series that have previously shot here that are looking at returning,” he said.

The Wilmington Regional Film Commission is seeing that as well.

“There is still really strong interest from projects looking at us – both television and features,” said Johnny Griffin, director of the commission. “As always, it takes time. Since [the state legislature made] changes to the state’s incentives program, we knew it would take time to get people used to us, bidding on us, working here.”

With the exception of uncertainties related to the coronavirus, Griffin said he doesn’t see obstacles that might dampen the industry’s enthusiasm about working in Wilmington or in North Carolina in general.

He cites the presence and abundance of experienced crew members, a stable incentive program and the fact that HB 122, the remnant of North Carolina’s “Bathroom Bill” that generated an outcry from many film companies, expired Dec. 1.

Bill Vassar, executive vice president at EUE/Screen Gems Studios in Wilmington, frequently checks the state’s COVID case map. Though cases are rising in the state, he said, the local rate of coronavirus infection is lower than in other filming centers such as New York and California.

Griffin warns that COVID could become a problem again at any time, but points to several factors in the area’s favor.

“We are a little bit more remote, and folks can social distance here. Instead of living in hotels, [visiting cast and crew] can get a house or an apartment where they can spread out and be comfortable. We don’t rely on mass transportation. And if there is a lack of things to do because of shutdowns, we’ve always got the beach here,” he said.

When tourism will come back to the Wilmington area “is the million- dollar question,” Hufham said. “Research has shown that once a vaccine is available to all, we will see travelers more inclined to resume back to normal.

“According to news reports that is projected to be at least late spring if not summer 2021, but it may take longer to fully rebound as many businesses have closed and continue to close as their sales wane,” she added.

On a brighter note, Hufham said, the Cape Fear region “will continue to do better than most because of our outdoor activities, beaches and mild climate. We know that business travel and group/meeting business will be the slowest to recover. We are cautiously optimistic that we will see some sort of turnaround in 2021 but how soon and how much remains to be seen.”