On Wilmington's Pointe 14 Movie Theater, A Q&A About The Pandemic's Impact 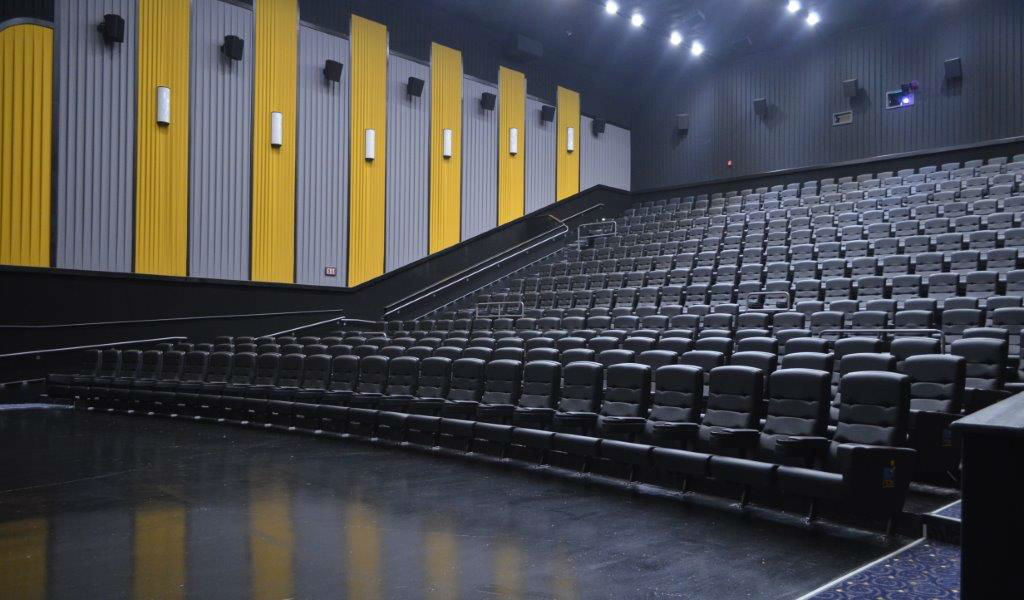 While Stone Theatres is preparing to reopen theaters in South Carolina, The Pointe 14 in Wilmington remains closed. (Photo by Holly Coleman, courtesy of Stone Theatres)

For more than five months, movie theaters across the U.S. have been closed, including in Wilmington, because of the coronavirus pandemic.

The Pointe 14 in Wilmington, which opened in 2017, anchors The Pointe at Barclay, a dining and entertainment complex in midtown Wilmington.

Dale Coleman, vice president of Stone Theatres, answered questions this week about the impact the pandemic and coronavirus restrictions are having on The Pointe 14 and his company overall.

GWBJ: How much longer can theaters like The Pointe 14 stay dark?

Coleman: “That’s a question that probably Gov. Cooper needs to answer more so than Dale Coleman. We understand the governor being deliberate and having tremendous concern for all of North Carolina, but he just recently extended the phase 2 reopening five weeks, which takes us out to Sept. 11. We are working very hard, not just Stone Theatres, but in conjunction with our National Association of Theatre Owners lobbyists, working with not only the governor's staff but state and local officials who are advising him. We’re working very hard to lay out our plans, which we fully believe show that we are very capable of opening as safe or safer than restaurants and other establishments in North Carolina that have been allowed to open currently.”

Coleman said that a national campaign, #SaveYourCinema, from the National Association of Threatre Owners, aims to secure relief that would help keep the movie theater industry afloat.

GWBJ: What are your hopes for the future?

Coleman: “Movie theaters have been part of the fabric of America for decades, and we fully expect that to continue. We understand that there are new normals in our daily life right now, but everyone in America, whether it's once a week, once a month, once a year, they look forward ... to getting away, going to dinner possibly and going to a movie where we provide an environment where they can escape the trials and tribulations of normal daily life and get lost in the magic of the big screen. And when they leave they feel refreshed, regenerated and ready to continue to tackle the responsibilities that they have each and every day with their families and their jobs. Movie theaters are a big part of the culture in this country, and we truly believe that that will never change.”

GWBJ: What is the situation with movie releases and the film pipeline?

Coleman: “The studios have had challenges because of the situation with movie theaters being closed across the country and world. A lot of the studios have moved their lineup of films around in the release schedule ... Even a few of the very popular films that we thought were scheduled for the holidays, namely Top Gun: Maverick, moved from July to Dec. 23 and very recently to July of next year. A Quiet Place Part II, which is a sequel to a very successful horror film, had moved to late-September and they moved that to April of next year.”

Coleman said movie theaters had been focused on two highly anticipated movies: Disney film Mulan, which is now premiering on Disney+ instead of in theaters, and Tenet, a spy movie by Christopher Nolan. Tenet is now expected to be released Sept. 4, during Labor Day weekend.

Regardless of the changes, Coleman said, “We still have a good slate of movies for the fall and holiday season. For me to tell you that the slate is as strong as it looked earlier in the year would not be accurate, but we think 2021 looks extremely good with the features from this year that have moved to next. We think we have a robust lineup of films for next year and we're very optimistic about everything.”

GWBJ: What do you think will happen when theaters can reopen?

Coleman: “There will be folks that are apprehensive, but we truly believe that if we can get the message out that our theaters can be a safe environment for our theater guests and our employees, we feel there is a pent-up demand, that folks want to get out of their homes. Home entertainment is great and technology over the years, as you know, has come a long way, but there’s nothing that can replace getting out amongst people for dinner and a movie. And there’s also nothing home entertainment-wise that can replace the magic of the big screen -- technology-wise, the picture, the sound systems -- it can’t be replicated at home.

“We’re bullish on our industry. We’re doing everything that we possibly can to maintain and get to the point where we can reopen our doors and very safely welcome our guests and our employees back to work.”

GWBJ: What will the theater be like when people come back?

Coleman: “We have a very comprehensive plan to accommodate all of the CDC and local health official guidelines in terms of social distancing, very regular cleaning and sanitizing of hard surfaces, and we have rearranged our auditoriums so that we can accommodate the 6-foot distancing. We have the ability obviously through our ticketing systems to control the number of tickets that we sell; we have the ability with our movie schedules to spread things out and to give us the time in between shows to accommodate and accomplish all of the necessary cleaning and surface sanitizing. We have sanitizing stations all over the theater itself; we have very prominent signage; we have floor markings for the social distancing. We’ve rearranged our lobbies and our restrooms to accommodate social distancing, and certainly we will have the necessary staff on hand to perform all of the additional cleaning and sanitizing that we’re going to be required to do to keep our theater guests and our employees safe."

GWBJ: How many people have you had to lay off during this period?

Coleman: “We were very fortunate when the PPP program came out we got on that very quickly when it initially came out there were a few bumps in the road in terms of the application process and whatnot. We were diligent. We were very fortunate that we were able to secure those for our theaters so we were very happy and very pleased that we were able to continue to keep our employees on the payroll and provide them with eight weeks of consistent income. When we secured the PPP, the initial guidelines were from the day it was funded, you had eight weeks to utilize the funds and it had to be 75 percent payroll, 25 percent other.

"And we had followed those guidelines to the letter. The unfortunate thing or the thing that no one had any way of knowing is that Congress would adjust those guidelines later on in the process and expand them and expand the deadlines and those kinds of things. But they didn’t do that until what seemed like the seventh week, and at that point, the PPP funding was about used up because we had been closed for such a long period of time.

“We’ve been closed now for five months. So at that point, we had no other choice but to lay off our hourly employees. But we have been in constant contact, and we are very confident that the majority of our employees [between 50 and 60 in Wilmington] are very willing and very excited about coming back to work when we have the opportunity to open."