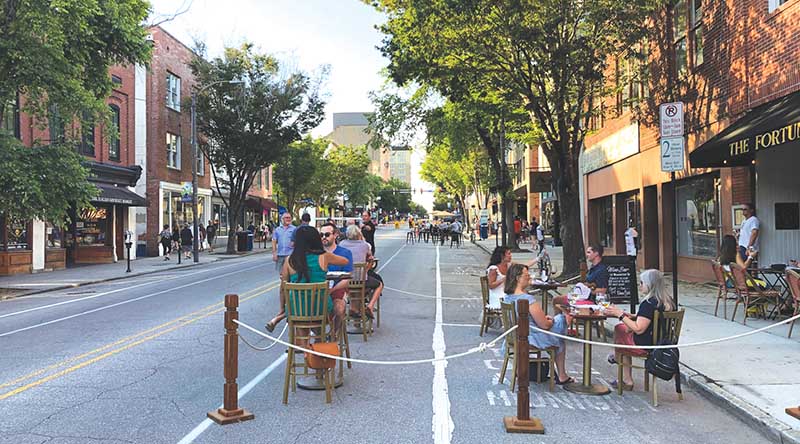 Downtown Alive is scheduled to end the first week in September, but because of the program's success and the continued impact of the COVID-19 pandemic on the area's economy, talks are in the works to push the program out further, said Terry Espy, president of Downtown Business Alliance (DBA).

To help the downtown business community with economic recovery through the COVID-19 crisis, the city of Wilmington, in collaboration with DBA and Cool Wilmington, launched the initiative this summer.

The program has been running Thursdays through Sundays throughout the summer and is now being eyed for a 12-week extension through the Thanksgiving holiday, Chris Andrews, president of Cool Wilmington, said Wednesday.

"This time of the year now that we're approaching, it's going to cool down a lot. Which has been kind of an issue with the daytime portion of the events [this summer]," Andrews said. "So ... it may be more utilized."

Cool Wilmington is the company managing the logistics of running the program in downtown Wilmington.

Andrews said the initial proposal would keep the program going Thursday, Friday and Saturday evenings, as well as Sunday mornings and afternoons, Sept. 10 through Nov. 29.

The new proposal is estimated to cost more than $123,100, Andrews said.

The proposal comes following talks on a range of possible plans that have been in discussions this week, he said. The new proposal is still subject to change and would have to go before Wilmington City Council for approvals, he said.

Wilmington City Council is expected to hear a presentation from the DBA on the Downtown Alive program at its meeting next week, said Dylan Lee, city spokesman, on Wednesday.

"We look forward to hearing the report and will consider any requests that we receive," Lee said.

The 11-week program cost about $110,000 for the summer season through the first week of September. Those funds included nearly $30,000 for barricade rentals, on top of other costs associated with staffing, towing, security and management and administrative costs, Andrews said.

Funding is still under discussion for a potential extended initiative, Andrews said. The initial money came from the city, including some DBA event funds and the Municipal Services District (MSD), as well as private donations.

The Downtown Alive extension and funding is slated to be discussed Thursday with the advisory board of the MSD, Espy said.

With more funding needed to keep the Downtown Alive events going, additional support may also have to come in the form of private donations, she said.

“By the end of the week we will have a better grasp on it," Espy said of the extended initiative.  "We have also spoken to some of the downtown stakeholders because some of the funds for the first round were private donors that helped put money in the bucket. They were not restaurateurs, they were not retailers – they were people who love downtown and do not want to see empty restaurants or empty storefronts.”

Extending Downtown Alive could come at a good time for many downtown businesses in light of the most recent second phase extension of the state's economic reopening plan and as some unemployment benefits are no longer available.

“We realize the unemployment checks have disappeared. Thank goodness Downtown Alive is there to help with downtown restaurants, specifically, to lure their employees back ahead of time because they have been making enough money to help offset the loss of the unemployment check,” Espy said. “We’re looking forward to seeing this go through the fall."