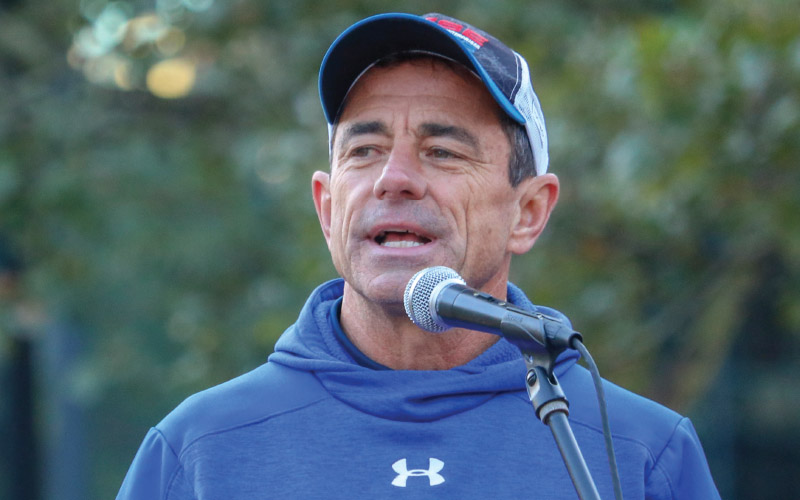 Boston Marathon director David McGillivray first got involved with the iconic race in 1978. He said a successful race requires community support and involvement. (Photo c/o Dave McGillivray)
Editor's note: Due to concerns about the coronavirus outbreak, the Business Journal has postponed our WilmingtonBiz Conference & Expo, where David McGillivray was scheduled to speak, from March 18 to Sept. 30.

David McGillivray has gone the distance, including running across the U.S. in 80 consecutive days, completing the Hawaii Ironman Triathlon nine times and running his age in miles every year since he was 12.

But for most of his 65 years, the Massachusetts native has been helping others go the distance as official race director of the 124-year-old Boston Marathon. The Business Journal recently caught up with McGillivray (he’s fast, with a marathon personal best of 2:29:58) for a Q&A.

GWBJ: What’s your history with the Boston Marathon, and how did you become race director?

McGillivray: “In 1978 [when I was 23] I ran across the United States from Medford, Oregon, to my hometown. I went seven more miles to Fenway Park and finished inside the park before a game in front of 32,000 people, and then my career just took off. I opened an athletic footwear and clothing store right after that and started putting on events to promote the store. Then I realized I liked putting on events more than I liked putting shoes on people.

GWBJ: How long does it take to prepare, coordinate and finalize the annual race?

McGillivray: “A lot of people ask, ‘When do you start working on the marathon? The day after the existing one?’ I say, ‘No, about three to six months before the existing one.’ Because you’re constantly learning, so as you’re building up to this year’s race, you’re doing or experiencing things that make you say, ‘Well, it’s too late to change this or that now, but next year we’ll do it this way.’ So, you’re working on the race for probably 16 months, even though the next one hasn’t even happened yet. For me, it’s pretty much 24/7, 365 days a year. It’s a labor of love.”

GWBJ: What makes a race successful, including some of the economic and social impacts?

McGillivray: “My No. 1 answer for a successful race is always community support and involvement. If you don’t have that, no matter how many dollars you have to spend and how many runners you have running down the street, it’s not the same. As far as economic impact of the Boston Marathon, the Greater Boston Convention and Visitors Bureau puts it at well over $200 million. We also have runners fundraise for charities. Last year we raised $39 million for over 150 different charities. Other race impacts include introducing new people and tourists to the city. Once they come and see [the sights] and like it, they’re coming back again, so we’re really talking a lifetime impact.”

GWBJ: What leadership advice would you give to men and women in the boardroom?

McGillivray: “To be a leader, I think you first have to earn the respect of the people around you, and second you have to be passionate about the industry you’re involved in. Experience also plays a big part. The thing I like about my level of leadership is that I worked my way up from the bottom. So, anything and everything that anyone [under my race leadership] is experiencing, I know where they’re coming from.

“There’s also the old cliché, ‘Give credit where credit’s due.’ Some people do the work, and other people get the credit. And there are those who give credit to the people who do the work. I like to think I’m the sort of person who acknowledges people’s work and input, lets them know how much they’re appreciated and gives credit where credit’s due. I think a lot of that has to do with self-confidence. If you feel confident in yourself and [have confidence] that you’re doing your job, then it’s easy to deflect credit and give it to those who deserve it.”

GWBJ: Why does every runner seem to use running as a metaphor for life?

McGillivray: “Runners run because it’s in their blood. There is synergy between what we do on the road and how we live our lives in terms of discipline, preparation and overcoming adversity. It’s pretty amazing when you think about what occurs from the time you start a race until you cross the finish line. At the start, you’re the most fit you’ve ever been, you’re full of energy, you’re ready to go and loving life. Then down the road you go, and by the time you get to the finish line, you’re like a 90-year-old guy run over by a truck or something. You know what I mean?”

McGillivray: “I’ll be honest with you, even with everything’s that’s out there [in the way of race nutrition], I’m still kind of old school. I just train hard, eat properly leading up to the race and then just pretty much get out there and do it!”