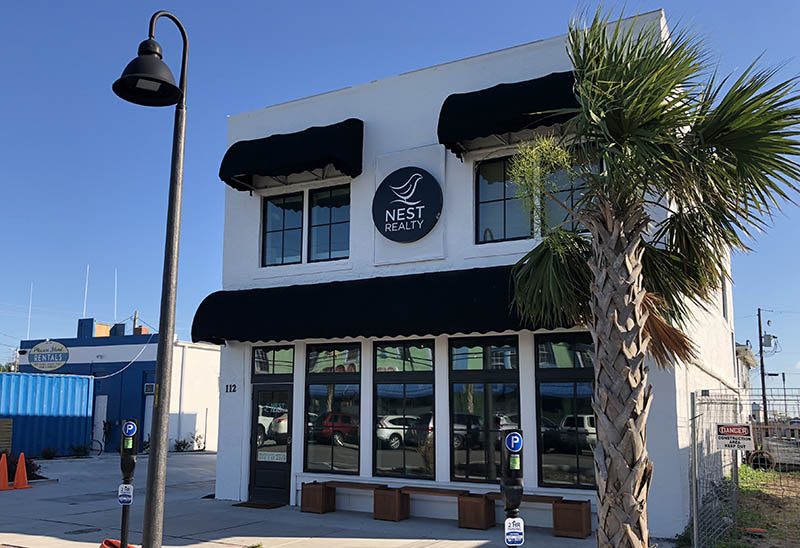 The new Nest Realty office in Carolina Beach is just one example of the area's growth in the real estate sector, which is anticipated to increase in employment base between 2017 and 2026, officials say. (Photo by Suzi Drake)
While the Wilmington region isn’t expected to add the most jobs in the state in the coming years, the area is projected to become the fastest-growing region for job creation, based on its average annual growth rate.

That’s according to a report from the N.C. Department of Commerce that took a look at job sector projections for 16 areas across the state between 2017 and 2026.

A summary of that data by a state analyst in June said that growth was projected for all 16 regions defined in the report. The Wilmington region included New Hanover, Brunswick and Pender counties.

The area’s projected average annual growth rate is 1.5%, while Charlotte came in second with a rate of nearly 1.2%, followed by Raleigh at about 1%.

The state’s summary called for flat growth for the Rocky Mount-Wilson area, which came in last among the 16 areas.

In all regions, three job sectors are projected to grow: real estate, rental and leasing; health care and social assistance; and accommodation/food service, stated the summary.

For those sectors in the Wilmington area, real estate is projected to grow by 1.3% on average each year, health care and social assistance by 1.9% and the accommodation/food service sector by nearly 1.7%.

“It seems to correlate with some of the trends we’re seeing in the southeast region, primarily that health care is growing as a business and job sector, that modest manufacturing job growth is occurring in parts of the region and construction activity is heaviest around the metro areas – Wilmington and Fayetteville,” Steve Yost, president of North Carolina’s Southeast, said about the findings.

The state’s summary, however, indicated a potential dip in manufacturing jobs coming up in North Carolina, shedding 10,000 jobs and dropping on average 2.2% annually between 2017 and 2026. In the Wilmington area, however, manufacturing is projected to grow by 0.8%, adding more than 550 jobs over the period.

Construction jobs locally are projected to grow by nearly 1.7% annually.

Much of that growth is tied to a larger, statewide growth trend in the service-producing sector, according to the state’s summary.

Wilmington-area sectors that showed a forecast of more than 2% annual growth were management of companies and enterprises; administrative and support and waste management and remediation services; and educational services, the summary stated.

“The strength of our goods-producing sector speaks to the broad array of advanced manufacturers here – from food and fiber optics to energy and aviation components. These operations deploy a spectrum of workers and, because of their supply-chain inputs, ripple a strong economic impact,” Satterfield said in an email.

The summary states modest growth is anticipated statewide in the goods-producing industries, and in several regions, a decline. Wilmington’s outlook, however, had projected gains in that sector of about 2,000 jobs.

“But the state’s projections also highlight the importance of our hospitality sector,” he added, “which provides an entry point into the workforce for many of our residents and offer management possibilities that come with an impressive level of career mobility.”