In The Business Of Brunswick 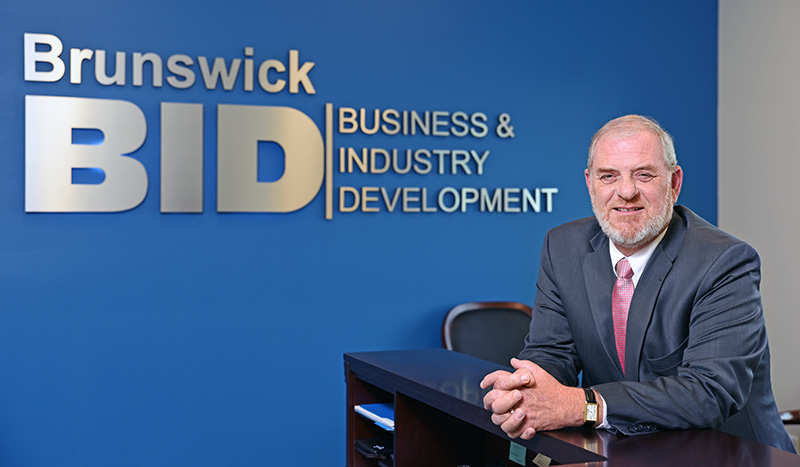 The view is appropriate.

Early, executive director of Brunswick Business & Industry Development, is charged with advancing economic growth within the county. Highway connections and an expanding retail and services sector are amenities he touts when wooing companies considering sites.

“One of the large economic drivers in Brunswick County is travel and tourism connected to our beaches,” he said. “However, I am charged with working on larger projects, particularly in manufacturing, distribution and logistics.

“Typically, manufacturing wages are much higher than others, except for professionals like doctors, attorneys and engineers,” Early continued. “Retail and tourism jobs are generally at minimum wage, and they are seasonal. While these jobs are good for the economy, and we support [the tourism economy], many people would prefer stable employment. We want to bring in those jobs.”

Early is quick to add that Brunswick Business & Industry Development, or BID, is not looking to locate manufacturing plants in its beachfront communities. The ideal sites for his target businesses lie further inland, he said, adding, “We’re wanting to be attentive to meet the needs of the entire county.”

Early may be relatively new to his position – he came to Brunswick County in January 2018 – but he has plenty of experience in economic development. An Eastern North Carolina native, Early spent 29 years as Hertford County’s business recruiter, bringing such companies as Nucor Steel to the largely rural area.

“Many counties have moved to this type of arrangement because [economic development efforts] need to operate at the speed of business, and often, government cannot do that,” Early said.

After organizing itself, BID contracted with a consulting firm to study the county and make recommendations for moving it forward economically.

The resulting plan will be presented to BID’s board of directors later this month, according to Early. But he has not waited for the plan to start business recruiting efforts.

High on his priority list is finding vacant buildings for companies wanting to relocate to Brunswick County or expand within it.

“Historically, 80 to 85 percent of companies looking to locate or expand start with existing buildings,” Early explained.

“What I have seen over the past year in documenting our opportunities is that about 33 percent of the requests [from prospective new companies] we could not respond to because we did not have the buildings,” Early said.

Early is also optimistic about the potential of the county’s two Certified Industrial Sites, situated on U.S. 74/76. Currently, water and sewer is being extended to the Mid-Atlantic Industrial Rail Park and the International Logistics Park so the sites will be attractive to potential tenants.

Early also eyes the possibility of developing a business park along U.S. 17 that could serve multiple small businesses and startups with shared or flex space.

And then there’s Project Pavement, the code name for an initiative to lure to a Navassa industrial site the manufacturing operations of an unnamed New Jersey-based company. While the company is interested in the site, Early said, BID cannot disclose any other information.

“The American economy is very competitive. Companies do not want to broadcast plans that could fall into the hands of a competitor that could move faster and take over the market,” he explained. “If you do not honor corporate confidentiality, [companies] will not trust you and will not look at your community.”

Ticking off the attributes that make an area attractive to new manufacturing, distribution and logistics companies, Early mentioned rail connections, availability of natural gas and proximity to both interstate highways and a port.

Another key to the success of business recruiting is having a qualified workforce ready for the new jobs.

The program involves testing an individual’s skill levels in four areas, and then matching that individual to the specific demands of an available position, Early explained, adding that BID’s collaboration with BCC could enable it to prepare local people for the demands of existing and prospective businesses.

Asked what drew him to his position in a very different part of North Carolina’s coastal region, Early said, “I had reached a point in my career where I could make a change. My first year here has been an absolutely amazing experience. … I believe Brunswick County is able to compete with any county in North Carolina; it has so many attributes to offer.”