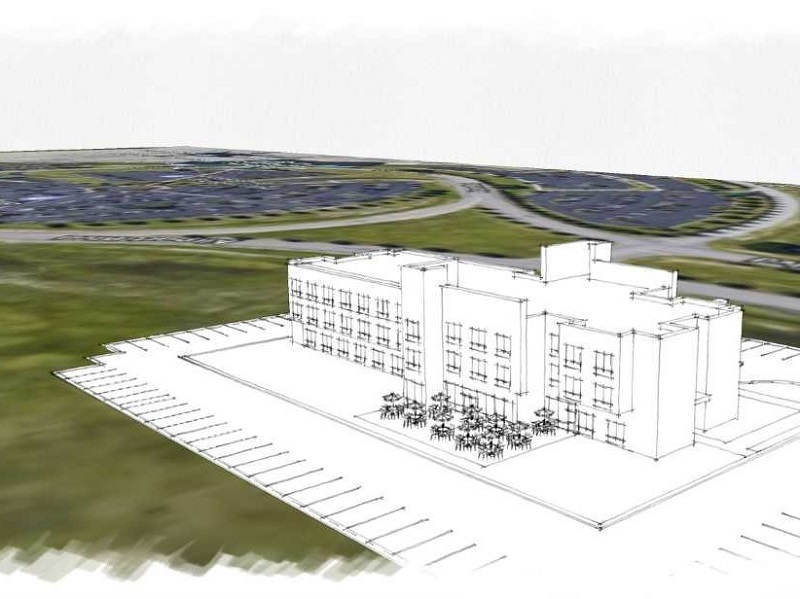 Pictured is a conceptual rendering for an airport hotel on ILM's campus. (Photo courtesy of ILM)
The Wilmington International Airport is looking to identify an entity that would develop a 100-room hotel on airport property.

The first steps in the push for an airport hotel development at ILM's Business Park is getting underway this year, said Carol LeTellier, business development director at ILM.

“It’s bubbled up on the priority list,” LeTellier said of the initial stages of the search.

"I would like to identify a flagship entity that would like to take the next steps to do some serious looking at building a hotel on airport property," LeTillier said.

She is leading the charge this year to identify a franchise opportunity, hotel operator or developer for the hotel.

“We’re envisioning a three-story flagship hotel with national recognition and a loyalty program because that will help sales and it’ll help grow the exposure to the park,” LeTellier said.

The charge comes after a study conducted by Strategic Performance Group LLC identified through an independent analysis for a new hotel on ILM business park property, that the Wilmington metro area can support another 100-room hotel that has food service, a conference room and a business center, to accommodate travelers who would prefer to stay near the airport, she said. That study was completed in October.

Vacationers are starting to use airport hotels as their destination from which they could go to a beach or downtown area, and can get a lower rate than at a beachfront hotel, she said.

“And so I very much see with our location, proximity to the beach and downtown, and especially if we got a hotel operator that wanted to include a pool like the Embassy Suites, I could see something like that happening here,” LeTellier said.

It will take some effort to lure a flagship hotel to the airport. Studies, however, indicate hotel revenues could range from $2 million to $3 million and increase each year once the hotel is up and running, LeTellier said.

The market for airport hotels is feasible, LeTellier said, adding that a similar-sized hotel is being developed at the Tri-Cities Airport (PSC) in Franklin County, Washington, which has about the same amount of air traffic through the airport as ILM.

“We’re just getting started. I have a select group of companies that I want to network with, owners of companies that may have an interest. At some point in time, we may do a request for proposals. But I don’t see that happening right now. I think we need some more information. It’s in the very preliminary stages in terms of reaching out," LeTellier said.

Though it is still early to see where the search might take ILM, LeTellier said that she could see something along the lines of a flagship hotel such as a Hilton Garden Inn or Extended Stay, for example.
The increase in passengers this year at ILM, along with its ongoing terminal expansion project at the airport, has increased ILM's ability to support a hotel, said Julie Wilsey, airport director.

Just over the holiday, for example, local statistics showed that enplanements Dec. 22 through Jan. 2 were up by 12 percent this year over the same holiday period in 2017, said Gary Broughton, deputy director at ILM.

Nearly 15,300 passengers flew out of ILM over the holiday period, compared to about 13,600 last year.

And the week before Christmas, American Airlines began its new nonstop service to the Dallas-Fort Worth area on Dec. 19, adding to other nonstop flights that started in 2018.

“ILM experienced tremendous growth in 2018 – breaking the 900,000 passenger mark," Wilsey said referring to a record level for the airport. "As airports reach the 1 million-passenger milestone, it opens opportunities for additional passenger services, such as an airport hotel and related landside businesses."