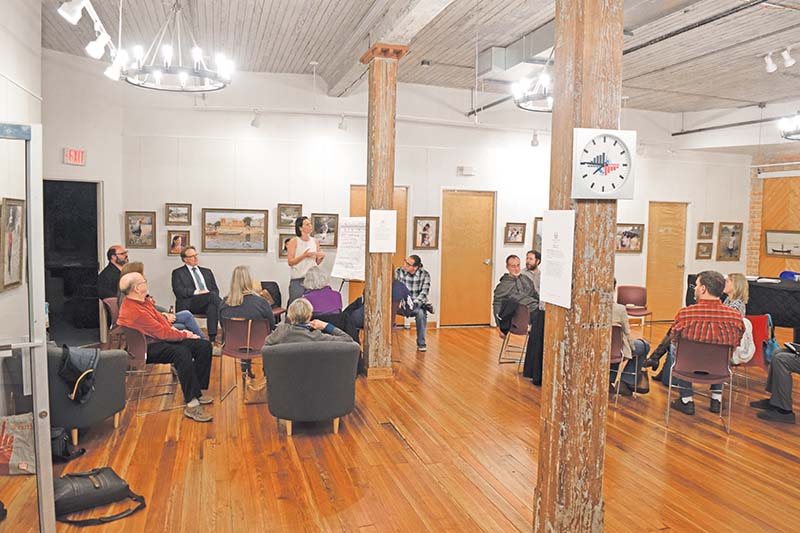 Members of the Cape Fear Economic Development Council held a meeting in December to discuss economic development objectives that will help shape the advocacy group's agenda for 2019. (Photo courtesy of CFEDC)
Business recruitment and job growth remain top priorities for economic developers and support groups in 2019 with a focus on a range of sectors for the Wilmington region, from distribution to fintech.

Some organizations are also developing new plans this year.

The Cape Fear Economic Development Council, a volunteer-based nonprofit, is slated to develop priorities and discussion topics in January, said Clark Henry, a CFEDC board member and owner of CIII Associates. Many of those focus areas, he said, will be based on input shared at a meeting in December.

At that meeting, attendees shared interests for more collaboration among regional economic development and government agencies, as well as a priority to include placemaking and environmental quality as regional assets to support business growth, recruitment and retention, Henry said.

Affordable housing and a stronger public transportation system were also other topics discussed.

“CFEDC looks forward to collaborating with the economic development interests in the region and working toward sustainable economic growth in the Cape Fear region,” Henry said of the group’s efforts this year.

Brunswick Business & Industry Development (Brunswick BID) has been working with a consultant firm to develop its strategic plan, said Bill Early, the group’s executive director. Last year was the first full year for the Brunswick County economic development agency. Brunswick BID is slated to receive a draft of the plan for review in early 2019.

“Once we get that finalized and approved by the board, it will give us a more specific set of goals and direction,” Early said. “In the meantime, we are trying to move forward with promoting the county, recruiting industry and business, and supporting existing businesses within the county.”

The Leland Economic Development Committee is also working on the first economic development strategic plan for the town of Leland. The committee hopes to have the plan completed and ready to be considered by town council for approval in late February or March, said Gary Vidmar, the town’s economic development and community director.

Priorities also include work to bring targeted businesses and industry sectors that are “good fits” for the area, he said, including value-added food and beverage production; aviation and aerospace; logistics and distribution; precision manufacturing; and life sciences and biotechnology.

“The Wilmington micro-region planning initiative is underway with development of a new three-year plan for marketing the micro-region,” Yost said. “There will be more to come on this in early 2019.”

“These opportunities exist because of the connections that are made between assets like the Cape Fear Industrial Complex and the port. The same logic applies to growth in our fintech or contract research sectors, which rely on connections between a growing, well-educated workforce and our region’s appealing quality of life,” Satterfield said.

“These principles don’t change with the turning of a new calendar page,” he added.

WBD also wants to see momentum across all targeted industries, he said.

“This will ensure our region’s economy remains diversified and that we don’t become too reliant on the fortunes of any one industry or, even more important, too closely tied to global business cycles. Economic diversification enabled us to weather downturns in 2001 and 2008,” Satterfield said. “So, I am confident that whatever we face in 2019 – headwinds or tailwinds – greater Wilmington’s economy can continue to prosper.”