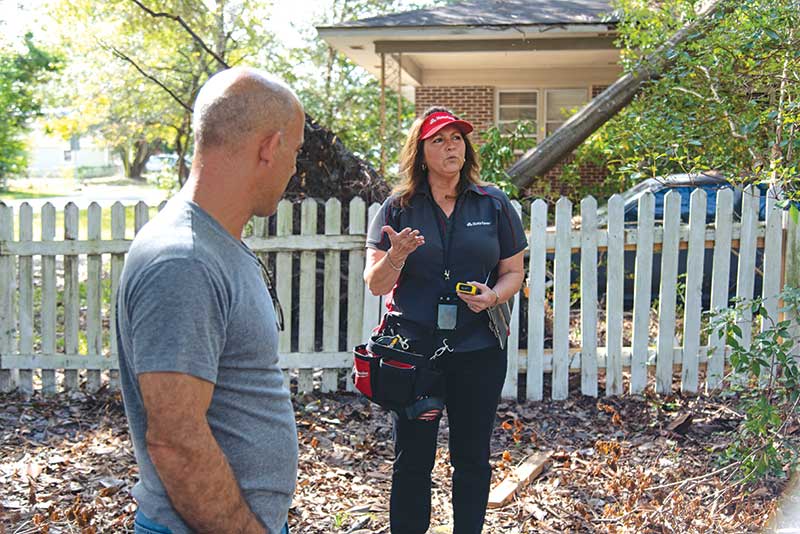 State Farm claims specialist Connie Carrell inspects the home of Ian Archibald that was damaged by Hurricane Florence in Wilmington. (photo by Michael Cline Spencer)
As Ian Archibald awaited the arrival of a State Farm Insurance adjuster at his Wilmington home on Oct. 9, his mind was also on a much more damaged property.

His wife’s home in Wallace was flooded completely as a result of Hurricane Florence, which made landfall Sept. 14 near Wrightsville Beach before dumping more than 2 feet of rain on the Duplin County town and throughout Southeastern North Carolina.

Archibald had been ripping out the insides of the Wallace house himself after getting quotes from contractors for up to $30,000.

His home near Wrightsville Avenue in Wilmington fared better by comparison, but shingles came off, a massive tree fell on his fence and water seeped in through the door, damaging the hardwood flooring.

Compared to the Wallace house, “This was kind of a second priority,” Archibald said.

As homeowners like Archibald calculate the damage to properties in the region and throughout the state, the cost to the insurance industry itself has also been a source of concern.

A Moody’s Analytics report on Sept. 21 estimated that the economic cost of Florence will fall between $38 billion and $50 billion, according to The Wall Street Journal.

In Archibald’s case, his wife had purchased flood insurance, but he said he doesn’t think many of the residents in the same Wallace neighborhood participate in the National Flood Insurance Program, created in 1968.

Homeowners policies don’t cover flooding, and while those in floodplains in theory are required to purchase flood insurance to get a mortgage, the requirement is not enforced.

“Congress enacted the NFIP primarily in response to the lack of availability of private insurance and continued increases in federal disaster assistance due to floods,” according to the National Association of Insurance Commissioners.

But not enough homeowners have been participating in the program, causing NFIP to have to borrow billions from the federal government. According to a New York Times article on the issue, the program has run a $1.4 billion annual deficit on average since Hurricane Katrina hit the Gulf Coast as a Category 5 hurricane in August 2005.

“One of the problems I see in North Carolina is too few people participate in the National Flood Insurance Program,” N.C. Insurance Commissioner Mike Causey said.

With fewer than 135,000 people in North Carolina participating in NFIP – out of a population of 10 million residents – hardly anyone in the state is paying into a flood insurance program, he said.

“The more people that choose to participate in the flood insurance program, the better off the program is and the better off those people are when it comes to risk of flood exposure,” Causey said. 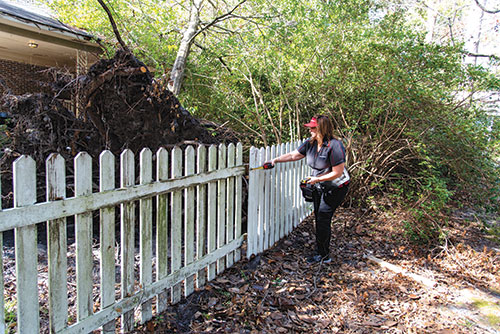 Although the NCDOI does not regulate the flood program at the state level, Causey said he feels it’s important for North Carolina homeowners to look into.

“The truth is, if it rains where you live, you need flood insurance,” Causey said. “As we’ve seen all across North Carolina, floods can happen anywhere. So the message is: Everybody should consider flood insurance regardless of where they live.”

Lawmakers and business advocacy groups, such as the local Business Alliance for a Sound Economy (BASE), have been working to address NFIP concerns over the years.

“As folks in our area are finding out firsthand, there are nuances to the different insurance types that come into play with events like Florence. In the big picture, it is important to have entities that have the financial wherewithal to withstand these types of disasters,” said Tyler Newman, president and CEO of BASE, in a recent email. “Storms like Florence are one of the reasons we have been working so hard recently on the new flood maps in Brunswick and New Hanover counties and the continued reauthorization of the National Flood Insurance Program.

“Having a functioning federal flood program is critically important to our region,” he added. “At the same time, we need to ensure that it is viable and encourage private insurers to get into that market.”

Newman said that several years ago BASE worked on a bill with state lawmakers “that took great strides in stabilizing the state’s Coastal Property Insurance Pool. It can sometimes seem arbitrary to have wind coverage only in the coastal counties since the storms go inland – but the overall changes ensured that the wind pool would be well-positioned to deal with an event like this.”

Hurricane Michael brought wind and rain to Southeastern North Carolina earlier this month, for example, but more extreme impacts were felt in the central part of the state.

But in the case of Florence, the N.C. Insurance Underwriting Association (NCIUA), also known as the Coastal Property Insurance Pool (CPIP), projects that almost $1 billion will ultimately be paid out when all insurance claims are filed from Hurricane Florence.

For the NCJUA plan, also known as the FAIR (Fair Access to Insurance Requirements) Plan, the total estimate as of Oct. 12 was $181.1 million for Florence.

For Coastal Property Insurance Pool claims alone, there were 63,503 CPIP claims received in the state as of Oct. 12, with more than 16,500 of those in New Hanover County, more than 7,500 in Brunswick County and more than 5,700 in Pender County.

As for the National Flood Insurance Program, Congress extended the program this year through the end of hurricane season, to Nov. 30.

“The House passed major reforms to the National Flood Insurance Program last year to ensure continued coverage for residents of the 7th Congressional District while putting the program on much more solid fiscal footing. We expect the U.S. Senate to produce a bill late this fall to be negotiated with House leadership and the House Financial Services Committee,” said Danielle Smotkin, spokeswoman for Rep. David Rouzer, R-N.C.

At Archibald’s house in Wilmington, State Farm adjuster Connie Carrell, a claims specialist and a Texas-based, 32-year employee of State Farm, took pictures and measurements, adding them to Archibald’s file via a State Farm app designed for the purpose.

About an hour later, she had an estimate for him. Archibald didn’t share the figure, but said, “I feel it was a fair outcome.”

FEMA is another resource for homeowners who had damage not covered by insurance, but the grants available from the federal agency aren’t meant to replace insurance.

It will be some time before all claims from Hurricane Florence are adjusted and closed, and the actual losses will not be known to insurance carriers until at least early 2019, said Ray Evans, general manager with the N.C. Rate Bureau.

The rate bureau, however, will be filing to the state insurance department to approve an additional increase, unrelated to Florence, to be effective later in 2019, Evans said, even though a 4.8 statewide increase became effective Oct. 1. This is because by the rate bureau’s estimation, the current residential property rates are inadequate, he said.