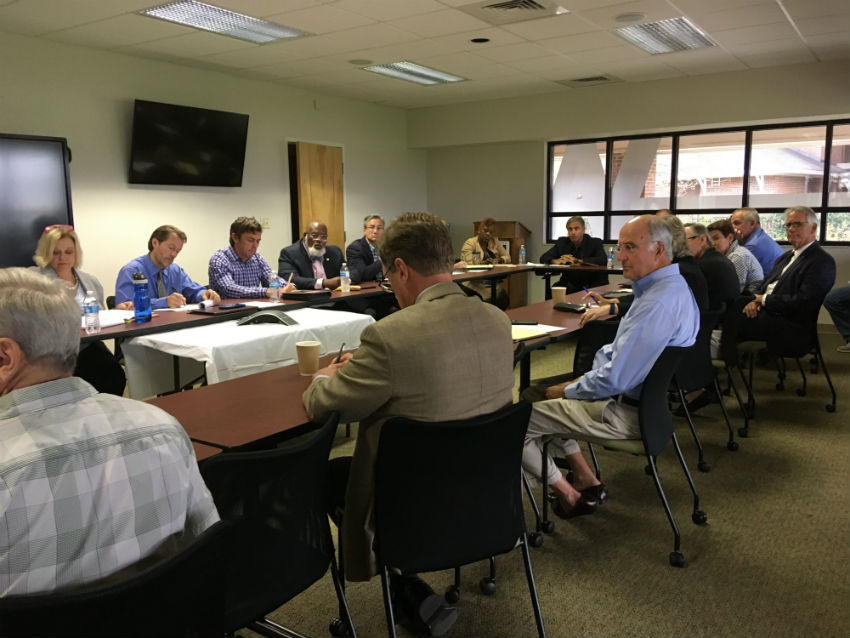 Wilmington City Council met with state and local leaders on Tuesday at the Wilmington Chamber of Commerce office. (Photo by Johanna Cano)
Wilmington Mayor Bill Saffo on Tuesday said that an early, preliminary private property damage assessment shows $219 million worth of damage from Hurricane Florence in New Hanover County, with $38 million in the city of Wilmington.

He said that number is likely to increase as more people assess their property damage.

Saffo said that as of 4 p.m. Monday, there was an estimated 650,000 cubic yards of debris that needs to be removed.

“That is the largest amount of debris ever in the city of Wilmington’s history,” he said. “That number is probably going to increase as folks begin to bring debris to the front of their properties.”

Both the city and county have begun debris collection.

Many city officials said at the discussion that the rebuilding and recovering efforts should focus on long-term fixes that can withstand future storms.

“We also want to be able to rebuild in a way that is going to be a model going forward that other communities, not only in the state of North Carolina but around the country could possibly use as to how do we get back on our feet,” Saffo said.

Saffo said in the meeting that the city’s image has taken a big hit as a result of Hurricane Florence and the national news coverage it has received.

“When people are seeing the flooding that's happening in the outlying areas, they think all of Wilmington and all of the beaches are underwater,” Saffo said. “We've definitely been tarnished with this, unfortunately.”

One of the things Saffo wants from the state is help to get the tourism industry back on track.

“We're going to need a lot of help at the state level in promoting the state of North Carolina to get back to business in respect not only to business but tourism,” Saffo said. “Tourism is a huge, huge driver of monies down here.”

The importance of helping not only individuals and their homes, but also business owners with storm recovery, was emphasized by Natalie English, president and CEO of the Wilmington Chamber of Commerce.

“Most communities who suffer a national disaster, less than 50 percent of their small businesses recover,” English said to the state and federal officials. “As we are rightly looking out for individuals and homes and getting people back on their feet, we also have to make sure they have jobs to return to. So, whatever policies you are considering, ensuring that we're also supporting that, and getting those businesses back.”

English said it is exciting to see how many businesses, especially in New Hanover County, are open and serving customers, but there are many businesses that still aren’t.

“I’m working with my colleagues in the chambers of commerce to try figure out what we need to ask for assistance, but we will be bringing some ideas to you,” English said.

The Wilmington Chamber of Commerce has been helping its members and others by informing them of resources available to them, including the Small Business Administration, which has established a center in the chamber’s conference room, she said.

The chamber has also been working to asses short-term and long-term housing options.

English said officials are working with Cape Fear Realtors, area homebuilders and other business organizations to also "assess what space is available for businesses that have been displaced."

(Saffo also gave an update on a film project's status after the storm.)