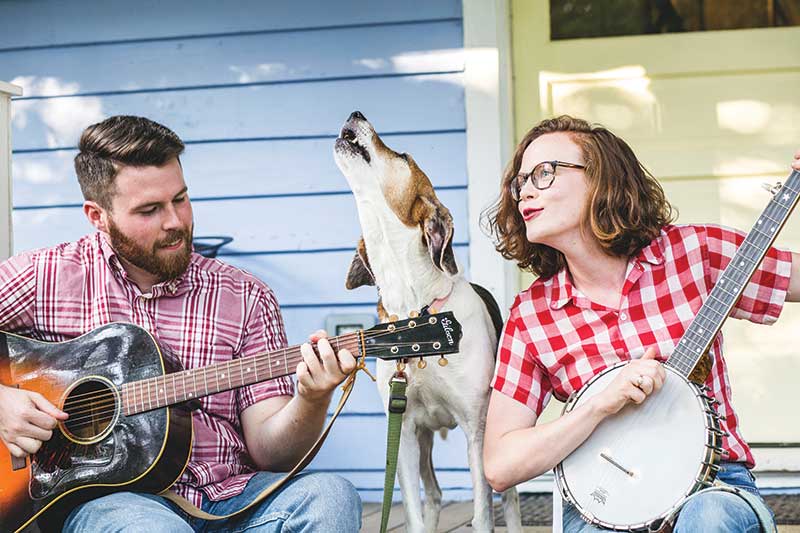 Husband-and-wife duo, Austin (from left) and Sarah McCombie, singing outside their home in Pittsboro with their dog, Ruby. They released “Chattanooga,” a single from their upcoming album, earlier this year. (photo by Kendall Atwater c/o Chatham Rabbits)
It only took one pensive weekend for Austin and Sarah McCombie to decide to devote themselves to their folk band Chatham Rabbits. They left their corporate jobs to commit to the music they have bonded over since they met.

Austin was raised in Wilmington and worked as a financial adviser at Northwestern Mutual. Sarah grew up in the Piedmont and played with the band the North Carolina Broadcasters. She was a music teacher.

The McCombies have been playing music together for four years, and Sarah said they decided to make music their careers in June.

Sarah plays the banjo, and Austin plays the guitar. Austin said his experience growing up in Wilmington can be seen in their music.

“I think that our music and our songwriting is very influenced by my upbringing in Wilmington just in the relationship I always had to the coast,” he said.

They plan on taking the skills they learned in their jobs and applying them to their band.

Austin said he used to call 30 people a day, selling himself as a financial adviser. Now, the McCombies call venues daily to promote their band.

“I’m really used to calling people and selling myself, being able to convince somebody that they should trust me with their business,” Austin said. “And it’s really the exact same thing I’m doing with music. It’s just instead of trusting me to manage money, they’re trusting that we will put on a good show for them and we will play good music.”

All the calling has paid off. The band is currently booked for 35 shows.

While they are passionate about the art of music making, they also understand the importance of the business side of running a band.

“We view this as a business, and so we left our corporate jobs to start our own business in music and part of that is just being financially responsible and making good decisions,” Austin said.

Part of those good decisions involve the home they purchased in Pittsboro, Austin said. They bought the home three years ago for a good price. They are selling the home and using the money for financial support as they begin to tour.

“It’s going to allow us to just have the last string cut so that we’re really on the road full time devoting ourselves to being wherever we need to be to be,” Austin said.


Chatham Rabbits had their debut show as a full-time band at Bourgie Nights in Wilmington. Billy Mellon, owner of the music venue and adjacent manna restaurant, understands how difficult running a music business can be.

Bourgie Nights opened in 2014 with the mission of providing small, up-and-coming bands a place to play and to accent manna.

He said part of running a music venue is identifying which bands and music styles fit the audience.

“It’s not really a winning business to book music a lot of days and expect the public to support those bands,” Mellon said. “It requires you to have somewhat of a good taste and a good finger on the pulse of what is the market’s enjoyable music tastes.”

Because of this difficulty, Mellon said he decided to make the venue more intimate.

“We hope that the minimalistic approach that we take with booking means that we’re bringing in really high-quality music,” he said. “They’re locked in on the music, really interested in hearing the band, doing the unplugged type deal.”


Bourgie Nights will be the recording location for Haley Banc, a Wilmington singer-songwriter who will record her first full-length album.

Banc is the first artist signed on by Blank Agency, a Wilmington-based music management company headed by Catherine Hawksworth.

Hawksworth, who also owns retail store Modern Legend, said from her experience as a business owner that running a business in music is like running any other business.

She left Wilmington for 10 years, and when she came back she saw changes in where musicians play.

“All these musicians are starting to find new places to go,” she said. “Bourgie Nights is a great example; in-store shows are a great example…. there’s a lot of different platforms that maybe just didn’t exist quite the same as they did before.”

Like musicians who play in unconventional venues, Sarah and Austin say they must be strategic about where they play.

“You’ve got to think about things like not inundating one certain area with your music from your shows,” Sarah said. “You’d want to have a good draw each time you come.”

The first album for Chatham Rabbits will be released in October. They recorded at The Rubber Room studios in Chapel Hill. They also filmed an episode for My Home NC, a UNC-TV show that details their journey.

Despite the financial uncertainty that can come with running a band, Austin and Sarah said they are excited to be doing what they are passionate about.

“I think the biggest difference is not necessarily in how to run the business as much as just that we feel like we’re finally connecting with the business,” Austin said. “We’re doing it because we love it, and we’re trying to build financial stability along the way.”