Jay Wileman, president and CEO of GE Hitachi, stands inside of GE Hitachi’s under-vessel training area, which is used to train both employees and local students in outage-related services for the nuclear industry. (photo by Chris Brehmer)
Changes in the nuclear energy industry are shifting the stakes for companies like Wilmington-headquartered GE Hitachi in the United States and global energy markets.

Some nuclear facilities in the U.S. are struggling with new build, maintenance and decommissioning costs, while more of them are approaching the limit of their federal operational licenses. In addition, the costs of other power sources such as natural gas, solar and wind are becoming increasingly more competitive in the U.S. energy grid.

For one of the largest employers in Wilmington, some of these challenges facing nuclear power have stalled projects and caused reductions in its workforce.

Company leaders, however, say they are looking to pivot with the industry to meet the future market needs and support both its customer and employment base to grow in Wilmington.

That focus will include continuing to service the industry’s older-generation nuclear plants in the existing fleet, while developing technologies that officials hope will help propel the industry forward across global markets, said Jay Wileman, president and CEO of GE Hitachi.

GE Hitachi (GEH), a joint venture between General Electric and Hitachi that provides advanced nuclear technology and nuclear services for the industry, is located on a 1,600-acre site off Castle Hayne Road, centered on about 200 to 300 developed acres with about 2 million square feet of space under rooftop.

The site holds manufacturing operations for its fuel business, under Global Nuclear Fuel (GNF) and GEH’s nuclear services business, while supporting service workers, training, engineers and technology units. Almost all of the company’s operations for nuclear are hosted in Wilmington, officials said. The site also holds operations for GE Aviation.


Total employment at the Wilmington site for all GE divisions is around 3,000 people – though specific numbers of the companies were not released.

Some changes to that workforce happened last year in February when officials said the adjustments were necessary to meet market demands in a changing nuclear industry landscape. The company did not report the numbers.

The layoffs happened shortly after the company’s Global Laser Enrichment (GLE) business based at GEH, announced that a project to develop uranium enrichment services capabilities could potentially result in a sale to Silex, another player in the project. Officials with GEH said the deal was not related to the job cuts. Officials with Silex said they were targeting execution of a purchase and sale agreement this year.

And previously in early 2016, GE Hitachi had shifted and reduced its workforce – though the numbers were not reported – as a result of Dominion Virginia Power’s plans to slow engineering work related its North Anna 3 project north of Richmond, Virginia. Dominion Virginia was GEH’s proposed partner in the development of its new Economic Simplified Boiling-Water Reactor.

General Electric Co. – which holds the GE Power unit and its nuclear division – announced shrinking revenues required cuts to its dividends and employment. GE CEO John Flannery said in its annual report that 2017 was a tough year. Sales were down 1 percent at $122.1 billion, according to his letter to investors.

GE Power also announced 12,000 layoffs in December, though those largely bypassed cuts in Wilmington, officials said. The power conglomerate did, however, cite some of the energy industry challenges as means for the decision to reduce overall structural costs by $3.5 billion in 2017 and 2018.

Stephen Arbogast, director of the Kenan-Flagler Energy Center and finance professor at the University North Carolina at Chapel Hill, said GE’s cyclical businesses are going through dips, including oil and gas, nuclear and the natural gas power business, while the health and jet engine businesses are up.

“The fact that GE has several businesses in down cycles, and they have a lot of legacy problems leftover from GE Capital, that’s what’s made GE look bad right now. Fundamentally, there’s a lot of good stuff in the company. If they can ride this out, they could look significantly better in a couple of years,” he said.

On GEH, Arbogast said, in the short run the company’s future could lie “very much outside the United States as far as a new build nuclear plant is concerned.” 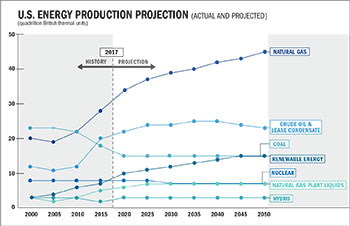 
GEH remains a US majority- owned nuclear technology company, one of the remaining pioneering nuclear firms that started the industry in the country, Wileman said.

“We’ve got Westinghouse that’s now owned by the Canadians ... and we’ve got Areva (now Orano USA) here, which is French-owned,” he said of the firms that have changed over the years.

“The new build has really stumbled somewhat here in the U.S., and the real focus here is of the 99 units we still have, we want to keep those operating because that is a large base load of emission-free generation,” Wileman said. “So our part in that is to bring the right technologies, innovations to bring value to the customers to reduce their costs.”

The United States currently has 61 commercially operating nuclear power plants with 99 nuclear reactors in 30 states, according to the U.S. Energy Information Administration (EIA).

The 2018 annual energy outlook report issued by the EIA projects that the nation’s nuclear energy consumption will continue to remain relatively flat through 2050, while natural gas and renewables will grow. That report also indicated a steady decline in U.S. nuclear projects in the overall power grid, with no new plant additions beyond 2020.

Wileman said the focus of nuclear will be a two-part endeavor in the U.S. – the first would be keeping the existing fleet going.

In April 2017, Exelon Generation, operator of the largest nuclear fleet in the U.S., awarded an integrated outage contract to GEH for the utility’s entire fleet of boiling water reactor (BWR) nuclear energy facilities and three pressurized water reactor units. The total value of the contract was more than $140 million.

The second, Wileman said, is moving toward “the advance reactor pivot.”

Some of the advanced nuclear technology, GEH has already in development.

In February, GEH also teamed up with Holtec International, a global equipment and systems supplier for the energy industry, to collaborate on accelerating the commercialization of Holtec’s SMR-160.

“So that seems to be one of the ways the industry is heading: small modular,” Wileman said.

New build projects would involve engineering work locally during the project, officials said. And longer term, the after-market fuels and services for SMRs and advanced reactor designs would also be supported by Wilmington employees.

Officials said the company is continuing to monitor the global market and is looking for opportunities for its small modular reactor and advanced reactor designs.

“We are working with our partners Hitachi in doing a lot of the licensing and design work,” he said. 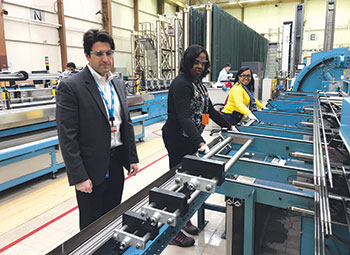 around the world, an international analyst says nuclear will still face a global decline.

Mycle Schneider, an independent international analyst and consultant on energy and nuclear policy, as well as initiator and convening lead author of the of the World Nuclear Industry Status Reports, said that the trend of nuclear over time demonstrates what’s going on in the industry.

“There have been four construction starts in 2017, all in Asia (one each in Bangladesh, China, India, South Korea), compared to 44 in 1976. The lack of new build … is such that there is no doubt that nuclear power will decline in the decade to come” he said.

“Nuclear service companies would do good to actively prepare for what will be a certain, gigantic business of the future: decommissioning and waste management.”

THE FUTURE OF GE IN WILMINGTON


“We’re very proud to be a part of this community for 50 years,” Wileman said. “The nuclear industry like a lot of industries experiences its different cycles ... We have done thatwave of builds. Right now, we are in this period where the industry is just resetting if you will.”

GEH also is working on partnering with a number of other companies to go after some of the decommissioning opportunities, Wileman said.

GEH was awarded a contract last year with OKG AB to support the dismantling of two reactors near Oskarshamn, Sweden, Wileman said. The project was touted by officials as the company’s breakthrough project in the decommissioning space in Europe.

“That’s an area that I think we will continue to grow,” Wileman said.

GEH is also aiding the development of its servicing workforce and continues to seek out opportunities in the existing fleets. 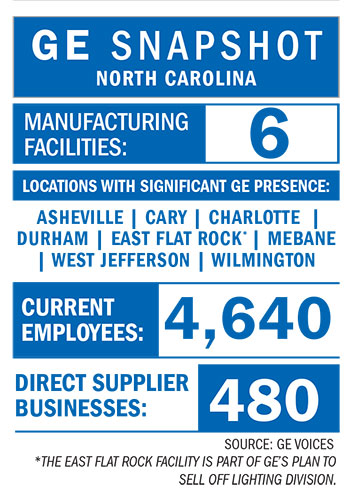 GEH opened its reactor under-vessel training area at the Castle Hayne plant in 2015, offering employees and students a broad range of technical experience in the energy market.

According to Amir Vexler, CEO of GNF, the fuel manufacturing site processes uranium into ceramic pellets that are then placed into fuel rods, and bundled up based off GNF designs. It’s an extensive manufacturing process that requires strict regulations.

GNF recently announced the shipment of lead test assemblies of two of its accident-tolerant fuel solutions engineered and manufactured in Wilmington.

“If they behave ... the way we expect, we could very well start the process of licensing and the next wave of accident tolerant fuel is going to be built here,” Vexler said of the test assemblies.