Aiming To Put Writing Back In Business 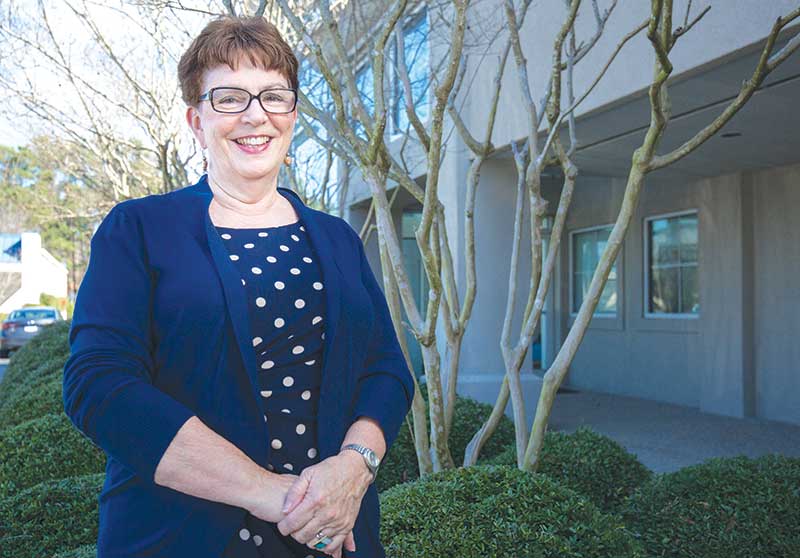 CEO of Uni-SPIRE Deborah Powell’s firm is based at the University of North Carolina Wilmington’s Center for Innovation and Entrepreneurship. Its online tool helps educators teach writing. PHOTO BY CHRIS BREHMER
Deborah Powell, a longtime educator and retired associate professor of language and literacy at the University of North Carolina Wilmington, had a problem that needed solving.

Several years ago she had a group of undergraduate students tutoring elementary kids but wanted to have a guide that could make tutoring sessions more efficient.

“There were lots of reading assessments,” Powell said. “But there really wasn’t anything for writing. So I thought a continuum would be a good way for them to know where their kids were and what the next steps would be.”

“They all loved it. And they commented about how it would give everybody the same language to talk about writing,” she said about the time when her continuum was tested with a group of classroom teachers. “It gave them an understanding of not only the standards for their grade level but the grade levels before and after. Then one teacher said this would be cool if it were online.”

Soon began the six-year journey that has developed into Uni-SPIRE, an online platform that gives teachers tools to help guide and track a student’s writing skills through the course of their education.

Powell, founder and CEO of Uni- SPIRE, a small business based at UNCW’s Center for Innovation and Entrepreneurship, marked the launch of the company’s Universal Writing Continuum 2.0, in early February.

She is currently working to market the cloud-based writing platform to school districts and similar markets.

Powell, an educator for 45 years, said she feels the tool will help teachers learn more about writing, how to teach it. Her goal is to bring a writing focus back into the classroom.

When No Child Left Behind passed in 2001, the focus in classrooms nationwide, she said, went to reading and math, and “writing kind of fell through the cracks.”

“The interesting paradox for that is that teaching writing with reading improves reading scores. There’s lots of research to show that … writing is a critical piece in the curriculum, but it’s not always seen that way. And that’s an issue,” she said.

With the program, teachers can find tools to help them develop writing lesson plans, upload student papers for evaluation and critique students’ work. The product also allows a student and their parents to track individual progress, as well as gives administrators the ability to track a class or grade level to see the school’s progress overall.

The product is issued by teacher license, which includes a platform for the teacher, his or her students, their parents and school administrators. It can also be sold in batches of licenses for school districts.

Each student has their own assessment based on certain continuum standards that teachers use to help guide that student to the next step while empowering them to become an effective writer, Powell said.

With version two of the continuum, Powell believes that the company now has an online program and database to meet industry standards. Now, Powell said, she’s ready to start selling.

Powell, who has owned and operated several companies in the past, including a ceramic tile business and publishing company, said that at first she wasn’t looking to start another business. But through the help and encouragement of some university faculty and its innovation committee, she reconsidered. Powell officially started her LLC in 2012.

The company became one of the first faculty startups to get help and some limited funding to hire students from the UNCW Research Foundation, she said. The company now has an agreement with the university’s Office of Innovation and Commercialization.

UNCW students built the product’s website and databases of the product. And over the past six years, nearly 170 students from various departments within the university have had a hand in building, testing or marketing the product, she said.

Powell said it is also helping teachers develop future professionals. “You have likely heard businesses complain that employees can’t write. It actually is a national issue that is affecting most businesses,” she said.

Remedial courses, including writing, are costing college students an estimated $1.3 billion each year, according to some reports, and even with remediation, “only about 11 percent of college seniors are proficient in writing according to the American Association of Colleges [and Universities],” Powell said.

Five schools have indicated interest in Uni-SPIRE since the new platform’s launch, Powell said. Regionally, she is talking with local charter schools and school districts about the product. There is also an avenue for the product globally in Australian schools and schools in other countries that have English immersion, she said.

“It really can go a lot of places. When we developed the continuum, we didn’t look just at the Common Core standards … We looked at curriculum and standards from many different English-speaking countries and built the continuum much broader,” Powell said. “I have this big vision of where I want to go, but now we are focused on writing. But the platform is easily adaptable.”