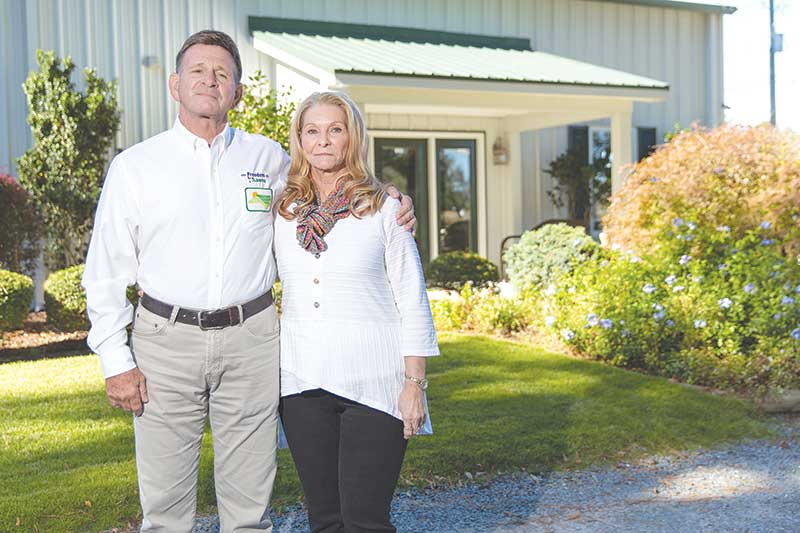 Mark Tamn has spent decades in the lawn care industry. He and wife, Lynn, are strategically approaching franchises to expand their Hampstead-based company Freedom Lawns. (Photo by Chris Brehmer)
Mark Tamn has spent four decades staking out his turf in the business world. Tamn is founder of Freedom Lawns, which provides lawn and plant maintenance services to about 4,000 customers in the Cape Fear area.

“We are a lawn and plant care company and provide pest control as well,” Tamn said. “Our philosophy is the same for all our services: It’s safer for children, pets and the environment. We use products that have the least impact on the human and natural environment.”

A native of Ohio, Tamn graduated from Ohio State University with an agronomy degree, specializing in turf grass management. Since 1976 he has been in what he terms the “green industry,” working in such positions as regional agronomist for one national company and franchise director for another. That experience prepared the soil for him to sprout his own business and replicate it. Along the way he became a North Carolina-certified turf grass professional and a North Carolina-certified landscape professional.

The first step on Tamns’ small business journey happened in 1999, when he and his wife were living in Wilmington.

Because the couple knew they wanted to franchise the business eventually, they kept their business plan simple so it would be easy to duplicate, Tamn said. As he mowed, fertilized, pruned and planted, the new business owner also took to the airwaves to build his reputation as an authority on lawn and landscape care.

“I had a radio gardening talk show in Wilmington on [the AM station] WAAV from 1999 to 2002 where I would answer lawn and garden questions and share information,” he said. “The show was called In the Garden. It was a nice experience and lots of fun. I also had a gardening book published in 1997 and did a book tour with Barnes & Noble through the South to promote it.”

By 2007, the Tamns were ready to begin franchising, opening coastal territories with similar growing conditions – and challenges – as Tamn had come to understand in the Wilmington area.

“This is a transition zone: It’s too cool for warm-season [grasses and plants] and too warm for cold-season [grasses and plants]. It’s pointless to seed [grass] here; better to sod, and then you have instant grass,” he said, adding that pest problems common along the coast, with its sandy soil, include mole crickets, which he says are unique to the Southeast, along with spittlebugs, chinch bugs and armyworms.

Ten of Freedom Lawns’ franchises are located in coastal North Carolina, South Carolina and Georgia. One is in Frederick, Maryland – not a coastal location.

“Each region has its own grass types. You have to have agronomic programs for different parts of the country,” Tamn said.

He will be developing those different programs as Freedom Lawns extends its turf.

“We’re looking to expand at the rate of about one per year, with a maximum of 20-25 franchises,” he said. “We’ll expand outside of the Southeast but stay in the East and maybe the Midwest. We’re not going to sell franchises in California, for instance: it’s too far away.”

In evaluating a possible new territory, Freedom Lawns looks at that area’s income levels and number of potential households in a demographic that will likely opt for professional lawn care. Franchise fees are based on the market size and potential. But Tamn sees opportunity in many places.

“Honestly, if you do good work, perform great customer service and conduct business in a fair and professional manner, you can grow a nice business in almost any market,” said Tamn, who credits his wife, Lynn, who does the bookkeeping and is very active in Freedom Lawns, for much of his company’s success.

“We’ll never be McDonald’s, with a location on every corner. This is a very technological field,” he said. “It’s our goal that all our franchises are profitable and successful, so that’s why we add only one a year. [Starting a new franchise] involves a lot of training; it’s very involved.”

In addition to providing training and technology for its new franchisees, Freedom Lawns helps its franchises with their online and direct mail marketing. In essence, Mark Tamn says, he and Freedom Franchises’ three-person staff teach their new owners “the business of their business and how to run it.”

“We have our own dedicated software that does things like generate management reports, keep track of customers and what’s been done. It also generates forms for their use,” he added.

Twice a year, Freedom Franchises hosts meetings for its franchisees at the Hilton Wilmington Riverside, bringing in speakers and holding sessions on topics such as technology and marketing for the coming season.

He said he also believes in growing his own crop of future franchisees. Freedom Lawns credits each of its 10 or so full-time employees $1,000 toward a future franchise fee each year that they are employed with the company.

“Our franchise owners come from all walks of life,” Mark Tamn said. “They do not have to have great lawn or plant care knowledge – that’s what we teach. They do need to have a good proven work ethic and be of good character. A strong business background is helpful, and they must have the startup capital required to grow the business, advertising money to brand the name. Above all, they must believe in our system and follow it to be successful.”