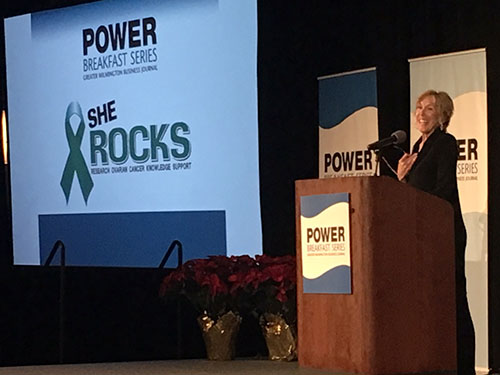 Beth Quinn of She ROCKS speaks at the Power Breakfast on Thursday. (Photo by Vicky Janowski)
The five speakers at Thursday’s final Greater Wilmington Business Journal Power Breakfast of the year spoke on a variety of topics, but all shared in the vision of a better Wilmington through design, education and giving.

Those issues, presented by what the Business Journal termed "Wilmington's Most Intriguing People 2016" in a TED Talk-style format of 10-minute presentations, ranged from the new urbanism to creating startup communities to changing a company culture.

The director of University of North Carolina Wilmington's Center for Innovation and Entrepreneurship, Diane Durance, told the more than 550 attendees the challenges that Wilmington faces in becoming a startup community.

“I’m very excited about what we have going on with our startups in the Wilmington community,” she told the audience. “The community needs to be inclusive of everyone who wants to participate. There need to be continual activities that bring people together, sharing ideas, connecting and building relationships.

“We are in the early stages of creating a startup community here in Wilmington. So we need to play to our strengths. We have strong industries here. We are strong in ed tech, in contract research and marine science, marine biotech, and those are things we need to continue to build on,” Durance said. “We also need to push our message out. We need to let people know what we are doing here, and what our strengths are, so we attract more talent and thought leaders in those fields.”

Many startup jobs are focused on areas such as engineering, technology, math and the sciences and those types of jobs are outpacing other jobs in terms of creation by 27-to-1, Durance said.

Chuck Schoninger, the founder and managing members of USA InvestCo, discussed the changes taking place around the downtown area.

“Can I live, work and have fun in one place?” Schoninger asked the audience.

Schoninger’s recent development projects in Wilmington include the Pier 33 venue, the Port City Marina and the Port of Wilmington Cold Storage facility.

"After World War II, we had suburbanism. People moved out from the cities, people wanted yards, and then came the McMansion where everyone also got a swimming pool,” he said while showing slides or suburban sprawl. “We became very good at postage-stamp neighborhoods.”

“The new principles of urbanism include walkability, as we are now starting to embrace our downtowns," he added. "People want to come back to their community. We want to know our neighbor; we want to have shared experiences. Connectivity is another principle of new urbanism, I want to be able to go to my grocery store, my pharmacy, my office and without having to get into my car if possible."

Education was the topic of Tim Markley’s address, and the superintendent of New Hanover County Schools was passionate about what works in public education and what doesn’t.

“When I talk about schools with people, I think a lot of folks think the essential question is ‘Do we have a good school system?’” he said.

Markley said that is not the essential question, because New Hanover County has a good school system. He pointed to charts that show the county at or near the top academically across the region and holding strong compared to the rest of the state.

The essential question, for Markley, is “Do we have the resolve as a district to make sure that everybody counts?”

The challenge in education, he said, is overcoming poverty.

“We need to care about every student in our district,” he said. “Poverty has a disproportionate affect on some of our children. It’s associated with delayed development, a lower literacy rate and higher rates of emotional and behavioral disorders.”

Markley also spelled out concerns about parental involvement and the critical role that plays in a child’s education and growth.

Beth Quinn, a senior vice president at First Citizen Bank in Wilmington, co-founded She ROCKS in 2014, a few months after she was diagnosed with stage IV ovarian cancer.

She ROCKS has been helping fund research to battle the disease ever since.

“I believe with all my heart, that someone will find a cure,” she said in an emotional and inspiring talk at the breakfast event. “We have to fund cancer research, we want to give people hope.”

Because there are no screenings for ovarian cancer and a person is typically asymptomatic until it is very advanced, Quinn could not have caught the disease earlier. That is why she teamed with friends Mary Barto and Tracy Brown, who has since passed away, to do something about it.

She ROCKS exists to bring awareness to ovarian cancer through funding groundbreaking research and by helping women who are undergoing treatment for cancer. The organization is committed to these pursuits and gives every penny that it takes in toward these goals.

“Wilmington is notorious for helping others,” Quinn said. “We were put on this Earth to do good and to help others. We were put here to make a difference.”

In a little over two years, She ROCKS has raised almost $550,000. The money goes toward funding research into ovarian cancer and brings attention to the disease.

After finishing her remarks, Quinn received a lengthy, standing ovation.

In a few weeks, Jack Barto will retire as president and CEO of New Hanover Regional Medical Center after a 13-year run. He recalled how when he took the position in 2004, he saw a need to change.

“I didn’t like the culture; I didn’t like the feel,” Barto said of his early days with the hospital. “We tended to look at the patients through our own eyes and how it impacted us. We weren’t looking at it from our patient’s perspective and how we behaved and how we reacted affected them.”

Barto set out to change all that. The patient became the singular focus.

“We needed a New Hanover way, we needed some ‘must have,'" he said.

He incorporated better and more communication, both between hospital staff members and also between staff and patient.

“We had to change behaviors, and trying to do that with 4,000 people on every encounter sounds simple, but it’s really very hard,” Barto said.

“What was big for us was we had to hire the right people,” he said, “so we changed how we hire people.”

Today, Barto explained, the resume is still important but so is the hospital’s behavior-based interviewing, which is then followed by peer interviewing involving four or five members of the hospital staff.

“Ask an applicant ‘How would you behave in this situation?’, ask behavioral-based questions, ask about scenarios,” he said.

Barto also spoke of the importance of developing leaders.

“If your businesses are anything like health care, you promote from within,” he said. “But you have to learn how to be a leader, you are not born a leader.”

Barto said that today at NHRMC, there is coaching and training for staff on how to become leaders.

Barto will retire at the end of this month.