The Wells Fargo Championship: One Year And Counting 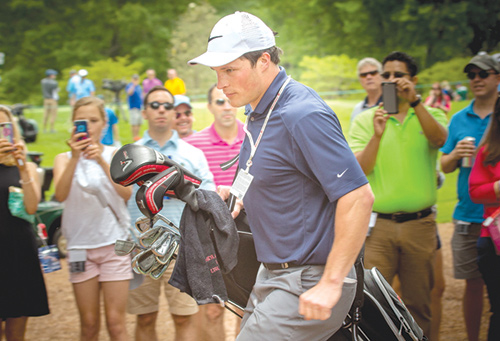 With less than a year before pros at the 2017 Wells Fargo Championship tee off at Eagle Point Golf Club, community leaders are aiming to hit a long drive down the fairway, score a birdie and create a business bonanza for the region.

“We’re ready to go. We want to get moving,” Tammy Proctor, director of tourism for Pender County, said after sitting down with a tournament official at this month’s Wells Fargo event in Charlotte.

The tournament is moving from its usual site at Quail Hollow Club in Charlotte to Wilmington for one year only to give the Charlotte course time to prepare for hosting the 2017 PGA Championship in August.

Proctor, one of a half-dozen civic leaders from the Wilmington area who went to Charlotte to look things over, is busy promoting Topsail Beach and vicinity as the perfect spot for a combined tournament-and-beach vacation.

“We deal with a lot of good Realtors in the area,” Proctor said. “We will put their names out there to the tournament. … We know we’ve got a lot of folks that are willing to rent.”

Arrangements with hotels and rental properties will be finalized “by the end of summer,” said Lee Patterson, director of communications for the 14-year-old PGA Tour event, adding that Tony Schuster, the tournament’s operations director, will also complete agreements for parking by that time.

Hotels and motels in New Hanover County had 7,991 rooms available for visitors in 2015 and additional rooms in Brunswick and Pender counties will help meet occupancy needs, said Kim Hufham, president and CEO of the Wilmington and Beaches Convention and Visitors Bureau, who visited Charlotte with a staff member to observe this year’s tournament.

With up to 30,000 tournament tickets available each day and a projected economic impact of between $40 million and $60 million for the Wilmington area, the May 1-7, 2017 event will not only benefit the lodging industry but is also expected to foster new or enhanced business relationships for area companies.

At this year’s Charlotte event, eight key “partners” such as Duke Energy operated hospitality suites looming over the 18th green. While such costly marquee suites may not be built at Eagle Point due to Wilmington’s single-year status on the PGA Tour schedule, 60 chalets are available to corporate sponsors.

“We’ve already sold 35 chalets … a good portion are Wilmington,” Mark Brooks, a corporate sales associate for the Wells Fargo Championship, said April 9. Area financial, medical, construction and real estate firms are just some of the businesses that have snatched up on-course venues for relationship building, he said.

Mitch Lamm, chairman of the board at the Wilmington Chamber of Commerce, observed how the Charlotte chamber engaged in business development while attending this year’s tournament.

“I got to see how they entertain potential members, potential companies that are possibly looking to relocate or expand in Charlotte, and I hope that we can take some of those best practices that they’ve learned over the years and share that next year when we will be hosting – in conjunction with the Ports Authority – customers looking to relocate or expand in Wilmington,” Lamm said.

“We want to partner with businesses to share the cost of a hospitality area,” Proctor said. “We will share tickets, etc. with our partners. That’s our goal.”

Corporate slots for Wednesday’s Pro-Am are also selling briskly. “We’ve already sold over half the Pro-Am spots,” stated Brooks, with Monday’s Pro-Am not far behind.

Parking is the most immediate matter facing tournament organizers, said Lee Helms, president of Charlotte-based Trolleys Inc., which operates Sunway Charters and who serves as the tournament’s point man for transportation.

Identifying suitable parking sites is essential to planning shuttle routes and other logistics, according to Helms, who has motor coaches based in Myrtle Beach and Jacksonville and has reached out to area carriers to round out fleet needs.

One local firm that received a call is Daniels Tours.

“We’ve got that entire week blocked for this event,” said Euran Daniels, whose company operates a total of 15 vans and motor coaches.

With University of North Carolina Wilmington holding graduation ceremonies the same weekend as next year’s tournament, the need to keep as many vehicles off the road as possible is essential, Daniels added.

“There will certainly be more airplanes than we’ve ever seen on the ground, we’ve been told,” Broughton said.

“Curb parking and traffic control is going to be a challenge,” he explained, what with pros and VIPs having 200 tournament-supplied cars at their disposal alongside other vehicles.

Officials are also speaking with airlines that service ILM to apprise them of the needs of traveling pros.

“There’s more and more golfers that are flying commercially,” said Gary Taylor, ILM’s operations manager, including some who fly with managers, spouses, clubs and luggage.

Taylor, who spent time at the Charlotte airport’s fixed-base operation and main terminal at the start of this year’s Wells Fargo event, witnessed the late arrival of 28 players flying in from New Orleans when play at the Zurich Classic was pushed back due to bad weather.

Financial support for select local charities is one of the economic windfalls of hosting the PGA Tour event, a fact not lost on The First Tee of the Cape Fear Region.

The First Tee, which organizes in-school, after-school and summer programs that help youth of varying backgrounds develop positive values through golf, currently serves young people in New Hanover, Pender and Duplin counties and is now moving back into Wilmington.

The nonprofit intends to build a golf village in New Hanover and have it ready for use by next year’s tournament, said Randy Hofer, the group’s executive director. Tournament-week activities may include a motivational session with pros, an autograph session and a clinic on the driving range, he added.

In the meantime, The First Tee continues to garner financial support and employee volunteers from sponsors like Live Oak Bank to deepen its instructional presence at area schools.

“The mere fact of the tournament is wonderful in focusing attention and conversation and getting this done,” said Gordon Dalgleish, the nonprofit’s chairman and an Eagle Point member.

Through a 2017 tournament sponsorship or by simply purchasing a ticket, “I hope that people in Wilmington don’t overlook the opportunity to participate in a world-class event,” said Wilmington Chamber CEO Connie Majure-Rhett, who called the support that she witnessed in Charlotte “amazing.”