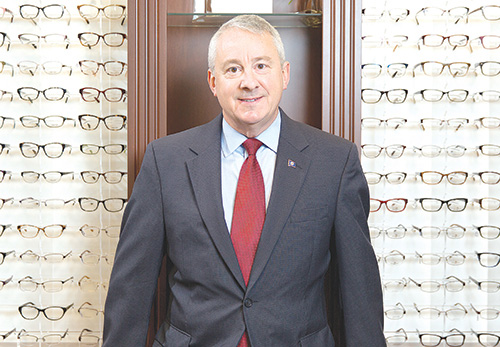 Optometrist Ed Paul is preparing to move his practice, Landfall Eye Associates, to a bigger space and to expand its scope to include training future practitioners. (Photo by Chris Brehmer)

Ed Paul is not one to be satisfied with the status quo. He’s focused on finding opportunities to improve and expand.

This spring, the optometrist and owner of Landfall Eye Associates is preparing for a move to larger quarters, a rebranding and an expansion of his practice. In June, Paul will relocate to The Offices at Airlie, a new development at the corner of Military Cutoff and Wrightsville Avenue. His new entity, Paul Vision Institute, will occupy three times the space Landfall Eye Associates now leases.

There’s a reason for the new name.

“When a practice labels itself as an institute, it means you are training young practitioners,” Paul explained. “I have signed a memorandum of understanding with the Southern College of Optometry in Memphis [Tennessee], one of the largest optometric medical schools in the country – and my alma mater.”

Paul’s practice will begin a teaching initiative, bringing in interns and residents from SCO to do clinical rotations. Interns will spend 16 weeks at the Paul Vision Institute; residents will spend a year. To ensure an in-depth experience for these future optometrists, Paul said, the institute will start small, with one intern and resident at a time.

The practice of optometry has changed substantially over the past few decades, Paul said. Whereas an optometrist’s practice used to be confined largely to administering eye tests and prescribing and fitting glasses, the education and training is now much more extensive – hence the clinical rotations.

“We can diagnose and treat eye disease; we just can’t do surgery,” Paul said, noting that eye surgery is the province of ophthalmologists.

The interns and residents who come to Paul Vision Institute will experience a broad range of services and treatments. Paul plans to add an associate so his practice can better serve current patients and accommodate others, he said. He will increase add one or two support staff as well.

Because his subspecialty is age-related macular degeneration, Paul has explored ways to enhance his patients’ remaining vision. He developed telescopic eyeglasses that allow these patients to see farther and more clearly than do traditional glasses, he said.

Each SightScope Flip, equipped with tiny telescopes that enhance vision and can flip out of the way when not needed, is customized for a patient’s particular vision needs, whether to read, see a computer screen, do artwork or drive.

“The No. 1 thing causing people to come see me is driving,” he said. “Not being able to drive represents the loss of independence to them. I find [restoring driving vision] the most fulfilling part of my practice.”

The bioptic telescope glasses are not Paul’s only contribution to the treatment of macular degeneration. Early in his career, the optometrist earned a Ph.D. in nutrition, thinking he might want to teach at the college or medical school level. Although he stayed a practitioner, that knowledge of nutrition has served him well.

“I have worked with various dietary supplements for treatment of eye diseases,” he said, adding that he developed Tozal, a supplement formulated to ease the effects of age-related macular degeneration.

Tozal earned Paul a Coastal Entrepreneur Award in the health care category in 2014.

The supplement contains high levels of antioxidants, zinc and Omega-3 fatty acids from fish oil, and is the “No. 1 prescribed supplement” for improving or stabilizing vision, according to Paul.

Paul does not manufacture or distribute Tozal – he has a licensing agreement with a pharmaceutical company that handles all that – but he does receive royalties from the product’s sales.

Running an entrepreneurial medical practice might seem enough to occupy anyone, but optometry is only part of Paul’s focus. He has another career as well, as the honorary consul of Belize for much of the Eastern United States.

Belize, which was known as British Honduras until it won independence from Britain in 1981, has nearly the same population – about 300,000 – as Brunswick, New Hanover and Pender counties combined, Paul said.

Although his title is “honorary” and his post is an unpaid one, Paul has the same capabilities as would a career consul regarding identification and document legalization, he explained.

Paul reports to the Belizean embassy in Washington, D.C., but operates from Wilmington, issuing visas and renewing passports and providing other kinds of services. While U.S. citizens don’t need a visa to travel to Belize, citizens of most other nations do, and if they are resident aliens in the Eastern U.S., Paul, along with a couple of other honorary consulate offices for Belize in the South, handles those requests. Belizeans living in this country come to him for new passports if theirs are set to expire.

Then there are issues affecting Belizeans living in the U.S., whether legally or illegally. In Wilmington alone, there are about 200 citizens of Belize, Paul said. Immigration is an ongoing concern, because Belize’s small economic base offers limited employment opportunities. He is often called on to help when Belizeans arrive on Southeastern U.S. shores illegally.

Paul is often asked how he landed the consul job. It was a result, he said, of his love affair with the Central American country where he and his wife honeymooned and have visited frequently in the years since. He has also done medical missionary work there.

Over time, the Pauls became acquainted with Belize’s former prime minister Said Musa. When Paul, in conversation, bantered about wanting to become Belize’s ambassador to the U.S., Musa appointed him to a five-year term as honorary consul. When that expired, Musa tapped him for another five-year stint. Paul is now in his third, five-year term, reappointed by the new prime minister, Dean Barrow.

“It’s quite an honor,” Paul said of his reappointment by the new government. “I don’t play politics; I have just tried to be helpful.”