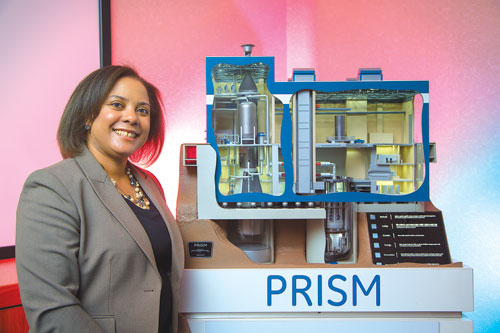 Kimberly Bankston, shown above at her job at GE Hitachi Nuclear, is co-chairing a chamber initiative with John Elliott to promote business diversity and inclusion. (Photo by Chris Brehmer)
Kimberly Bankston, general manager of human resources for GE Hitachi Nuclear, and John Elliott, east region director  of government and community relations for Duke Energy, have a passion for their latest project.

They co-chair the Wilmington Chamber of Commerce Diversity Committee, formed to bring focus to diversity and inclusion in the local business community.

“The chamber has always been involved in diversity,” Bankston said. “We decided we should have a standing committee and develop a strategy.”

Connie Majure-Rhett, president and CEO of the Wilmington Chamber of Commerce, said the group now has resources to focus on the issue.

“We have the right people at the right time. We have two leaders with interest and experience that would get involved, and we had the resources allocated in our budget for the first time last year,” she said.

The initial step was to make sure everyone had the same understanding of what a diversity initiative looks like from a business perspective, Elliott said.

“That’s the chamber’s focus – to increase business,” Elliot said. “What gets measured gets managed. That’s why it’s exciting.”

Business needs diversity on different levels: the employer base and the supplier base, Bankston said. Smaller businesses need to know how to connect with other businesses.

“It’s good for community members to know that companies are devoted to diversity and inclusion,” she said.

Another need is more personal. Employers are bringing in new talent from outside, and with them their families, who want to be involved in the community, Bankston pointed out.

They want to know how diverse the community is in the Wilmington area and what is available for their families. The diversity committee plans to reach out to University of North Carolina Wilmington and other organizations to involve the community.

Events are in the planning stages with community conversations coming possibly in late summer, the committee chairs said.

“We’re doing it in a measured way so it becomes sustainable,” Elliott said. “It’ll be a part of everything the chamber does.”

It’s good for the chamber too, he said, adding that growing membership brings more diverse opinions and activities and adds to the agenda in the business community.

“Everyone is diverse,” Bankston said. “What’s important to the chamber is a diversity of ideas.”
Bankston is not a newcomer to leading diversity initiatives. In her previous roles as managing director of human resources at GE’s Advanced Manufacturing and Software Technology Center in Detroit and as global diversity leader of GE Capital Corporation in Norwalk, Connecticut, she led similar programs. GE has had diversity and inclusion programs for years.

Nor is Elliott new to diversity efforts. Duke Energy is heavily engaged in diversity and inclusion, Elliot said, and he has played a role in those efforts.

The chamber plans to add to its current programs on diversity. It is already working to foster diversity with Project Lead the Way, a national provider of science, technology, engineering and math (STEM) programs designed to help K-12 students develop the skills for success in a global economy. The chamber provides the curriculum for Trask Middle School where students are introduced to potential job areas.

“This is very important to the business community as it is helping to grow our future pipeline of talent locally,” Bankston said.

Possible new events include community conversations or focus groups designed to educate the public on what the chamber has to offer and to get feedback on what is most needed to promote diversity and inclusion.

Ideas for a business fair have been considered, in which buyers and suppliers can meet or where seminars are offered on various certifications needed to do business, Majure-Rhett said.