National Speed Gears Up For Expansion 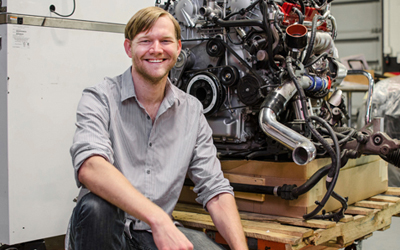 Jordan Watson, president/CEO (photo by Katherine Clark)
As a global security contractor Sean Hoopii headed home from Afghanistan recently, and he couldn’t wait to get behind the wheel of his latest toy.

“I touched down on March 26. I went down to National Speed the next day,” the Jacksonville-based ex-Marine recalled.

Feeling burned by other speed shops, Hoopii was hesitant to modify his 2008 Nissan 350Z until he heard good things about the work being done in Wilmington.

Sight unseen, “I reached out to them, and it was just game on from there,” Hoopii said, placing an order to have National Speed maximize his car’s street performance while he was deployed. “I just wanted something where I could maybe track it a little bit but also daily, drive it.”

Using virtual technology to inspect parts and sign off on suggestions from afar, Hoopii road-tested his car at homecoming. National Speed “really built trust,” he said.

Founded six years ago by car enthusiast George Taylor after experiencing his own frustrations with speed shops, National Speed has already amassed 5,600 clients and more than $7 million in revenues. Clients range from 16-year-old “gearheads” to retired businessmen “living the dream” in Corvettes, with current and former service members rounding out the mix.

Most clients are street performance-focused and don’t do much off-roading or track work, said Jordan Watson, the company’s president and CEO.

“They’re hooked, and they love it. It’s kind of a new way for them to enjoy their car,” he said.

Crew members at the Gordon Road shop arrive at the best combination of aftermarket components, tuning options and custom fabrication while making extensive use of software.

“We spend a lot of time developing software that ensures consistency and building proprietary knowledge bases and databases for calibration files, down to what parts to recommend for certain jobs or certain goals …for every common vehicle that we work with,” Watson said.

Scrapping a commission-based compensation model, National Speed now pays all crew members a salary that ranks in the top 10 percent of the market. It also hires for specific intelligence and personality traits, avoiding “lone wolves” and building team cohesion. And each workday, management buys everybody lunch.

Describing the country’s $13 billion speed shop scene as a “fragmented and leaderless” opportunity, Watson is gunning for the competition. The company has identified 52 U.S. markets that fit its growth profile and will roll up the bay doors at a second shop in Richmond, Virginia by year’s end.

“You can’t take ‘em with you,” National Speed’s CEO said. “You may as well enjoy them.”