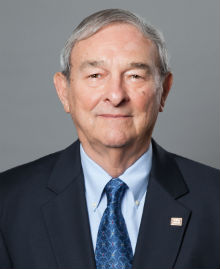 Warwick, a CPA for 60 years whose name graces a University of North Carolina Wilmington building, is now employed as a financial adviser at Fountain Financial Associates in Wilmington. His last day as a manager at audit, tax and consulting firm RSM US, a national company that has a Wilmington office downtown on Third Street, was Friday.

"I'm going to simplify my life some," Warwick said Monday of his job change. "I am a CPA PFS -- that's a personal financial specialist -- and I actually organized a financial planning department in my firm in 1982, so I've been doing that type of work for many years. ... I'm going to continue to serve my clients that I served as a business consultant and financial planner for many years. ... I'll just be doing it out of a different office."

Usually staying behind the scenes in his efforts to help the community, in 2009 Warwick formed the Coalition for Economic Advancement (CEA) because he felt a Titan cement plant proposed for Castle Hayne and the jobs the plant would have created were not getting the necessary support. In 2016, Titan America LLC officials dropped the proposed plant, to the disappointment of Warwick and others in the business community, while some groups celebrated the announcement.

Warwick said he continues to be involved in the CEA and is active in economic development efforts, staying available to work on projects for the Wilmington Chamber of Commerce and Wilmington Business Development.

"Wilmington's very successful in the tourism industry, and that provides a lot of jobs to the Wilmington area. Generally speaking, those jobs don't pay as much or provide the same benefits as say manufacturing companies and high-tech companies," Warwick said Monday. "Obviously one of our great successes of recent years has been Live Oak Bank and nCino, and other companies that have spun off from that so that's been a great success, and we'd love to have two or three more like that."

Global contract research organization Pharmaceutical Product Development (PPD) has also been a stalwart for many years for the Port City, Warwick said.

"We're very fortunate that people like to live here. And that's definitely the reason Live Oak Bank is here and the reason PPD is here with us because of the attractiveness of our area. But I think we always need to work on increasing our industrial base, manufacturing," he said, adding that Wilmington would also benefit from having a few more major manufacturers such as Corning and GE.

A Wilmington native, Warwick attended Wilmington College (which became UNCW in 1969) in 1955, completing his degree at the University of North Carolina Chapel Hill. Former UNCW chancellor James Leutze called Warwick "an outstanding asset to the university," according to UNCW's archives on the Warwick Center.

"He became a partner of Lowrimore, Warwick and Co. from 1973 until its merger with Gladry and Pullen CPA in 1992. Mr. Warwick was ... a past member of the Greater Wilmington Chamber of Commerce and Committee of 100. His leadership and dedication to UNC Wilmington is apparent through his positions on the Alumni Board, the Seahawk Board and as Chairman of the Foundation and Endowment Boards," the Warwick Center archives page states. "From 1989-1997, he sat on the UNCW Board of Trustees and was on the University Board of Governors. Mr. Warwick was also co-chairman, along with Mr. Bruce Cameron, of the capital campaign fund to build this center. This honor is given to him due to his 'professional counsel, philanthropic spirit and love of this campus.'"

Warwick continues to be involved in philanthropic and fundraising efforts at UNCW and other organizations and foundations in Wilmington.

"I can't think of anybody whose character and track record in this community is any more impressive," said Fountain of Warwick. "His civic work and leadership in the community, the things that he's been a part of, are extensive, but also when you get to know him, as a person he has a lot of very personal impact on people and friends and family. He's equally as successful there as he is in the professional field."