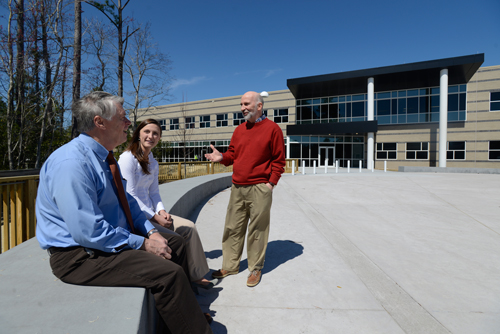 New venture: Dan Baden (from left), Leeanne Bruin and Jeffrey Wright in front of UNCW's new MARBIONC Building, which will open soon in what is now being called the university's CREST Research Park off Masonboro Loop Road.

Imprints of algae species caught in mid-swim are stamped into the concrete in front of the University of North Carolina Wilmington’s newest building.

The species are ones researchers with the university-related MARBIONC program have been working on in recent years in the hopes of turning marine environment materials into new uses, drugs and technologies as well as potential spin-off companies and jobs.

Soon, those researchers will move from their lab spaces next door to the new building.

Joining them, program officials are banking on, will be outside companies in a project that marks UNCW’s first attempt at this type of public-private partnership.

And others could be on the way.

Scientist-designed
Finishing touches are underway at the 69,000-square-foot, $30-million MARBIONC Building. It sits next to UNCW’s existing Center for Marine Science (CMS) off Masonboro Loop Road.

For more than a year, workers have been busy building the two-story facility. Now all that’s left are the final checks and permits, a grand opening ceremony and paying tenants.

“The principal scientists helped to design this building,” said Leeanne Bruin, coordinator of business operations, who has been marketing the building to prospective companies.

As of mid-March, none had committed to leasing space in the new building, though Bruin said there were some letters-of-intent in the mix.

She said once the building was cleared for occupancy and the MARBIONC researchers were in, the facility should be easier to market.

At $33 a square foot, the leasing rates – though negotiable, officials said – are expected to attract established firms or those at the accelerator points of their life cycles.

David Grange, who retired as CEO of PPD Inc. in 2011, has been serving as a consultant to help with the leasing efforts, Bruin said.

UNCW used 30-year bonds to pay for half of the $30-million building. The other half came from federal stimulus money through a grant from the National Institute of Standards and Technology.

Filling the labs
Dan Baden, who wears the multiple hats of marine science professor, CMS director and MARBIONC executive principal, came when CMS was built in 2000.

“We thought there was enough space that we would last for a decade,” he said. “We were full in five years.”

MARBIONC, a marine biotech economic development program the school launched in 2004, moved into the CMS building, sharing space with the other academic researchers.

When MARBIONC’s 29 researchers soon move next door, the space they leave behind still will be used. Baden said there have been seven new hires on the university’s academic side to move into CMS.

Besides its drug discovery program, in which researchers are studying marine organisms to try to address conditions such as cystic fibrosis and strokes, MARBIONC also has built up an inventory of cataloged cultures of interest to other researchers.

“There’s so many opportunities that could come out of all the cultures we have and all the expertise we have here,” said Jeffrey Wright, professor of marine science and chemistry at CMS and principal and director of research for MARBIONC.

Baden said part of the reason the construction project attracted the federal money was because government officials are interested in accelerating technology translation, or moving university-based research discoveries toward commercialization, as a way to spur innovation.

He said that’s been a focus for MARBIONC for nearly a decade now.

In the new facility, MARBIONC will take up a third of the building’s lab space. Another third is set aside for 13 nearly 900-square-foot modular labs that leasing companies can modify for their research needs.

Leasing out space to private companies, however, does not make UNCW a traditional landlord, Baden said. He said the point was not to make money off the real estate but to promote economic development.

“It’s a break-even proposition,” he said about the leasing.

The rest of the building is for common areas – meeting rooms, a cafeteria and coffee nook – designed to “encourage frequent opportunities for informal and formal collaboration and cooperation.”

Building a research park
When the MARBIONC Building opens, it also will launch the university’s CREST Research Park, the first of several millennial campuses planned at UNCW.

The park covers 60 acres that include the existing CMS building, the new MARBIONC Building, a shellfish research hatchery and space for future development, such as an education building and apartment housing for visiting scientists.

The research park as well as the ability to lease part of the MARBIONC Building to companies came from the state’s push for millennial campuses.

The move spring boarded off N.C. State University’s Centennial Campus, which was founded in 1987 and expanded to the point where it now encompasses more than 1,200 acres and partners with 64 corporate, government and nonprofit entities.

In 2000, the state legislature opened the door for similar collaborations at other UNC-system schools.

Since then, other millennial campuses have been approved, including these for UNC-Chapel Hill, UNC-Charlotte and a joint project between UNCG and N.C. A&T.

The MARBIONC Building is part of the site for South CREST, which stands for Campus for Research, Entrepreneurship, Service and Teaching.

The other approved sites are on the main campus and are East CREST, initially with a focus on a forensic laboratory, and West CREST, pitched to house a health, fitness and nutrition center.

The school already has seen some development on the East CREST property, namely with student housing, parking deck and small dining area but has not yet entered into any private partnerships there, UNCW spokesman James Jarvis said.

He said the university has not initiated development of West CREST.

“We will consider a variety of opportunities there in the coming years,” Jarvis said.

UNCW chancellor Gary Miller called the Millennial Campus Financing Act an innovative piece of legislation for universities to partner with the private sector.

“At UNCW, we are very actively exploring how we might use this tool to advance our mission of teaching, research, service and community engagement,” he said in a statement.

“The completion of the MARBIONC marks the beginning of what we expect to be a significant expansion of our capacity to attract and partner with businesses working in biotechnology.”

While Baden and Wright speak confidently about the potential for their corner of the CREST parks, they know building a full-blown research park around the biotech facilities likely will take time.

“It’s not going to happen overnight,” Wright said. “Centennial Campus – they were a 20-year overnight success.”