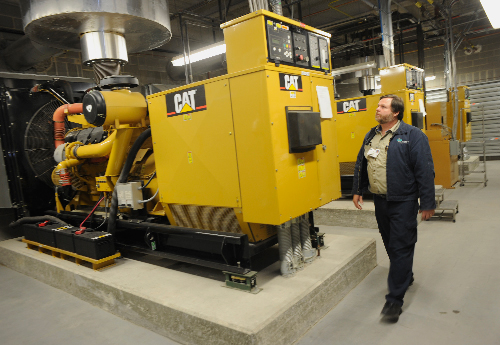 Rising energy costs this cold-weather season have the potential to put a chill in about everyone’s wallet.

A U.S. Energy Information Administration report released in October suggests households and businesses should expect energy bills to be higher this winter, with a forecast of colder-than-normal temperatures.

The report stated that households with heating oil systems should expect a 19 percent hike in their winter fuel bill from the period of Oct. 1 to March 31.

The report also said that houses using natural gas as a primary source of heat can expect to pay an extra 15 percent this winter over the same time frame.

“It is going to be colder than last year, and as a result of that, heating bills are going to be higher,” EIA administrator Adam Sieminski said.

Like their smaller counterparts, the area’s larger employers must factor energy costs into the bottom line.

PPD has taken a number of steps to help manage winter energy costs, spokesman Ned Glascock said in an email response to questions.

“PPD’s careful stewardship and application of modern technology help us keep our winter heating costs manageable. We watch our energy costs very closely and manage our facilities as efficiently as possible,” Glascock said.

That’s the case at PPD’s global headquarters in downtown Wilmington.

“We have held our electricity costs at a consistent level for the past six years, despite rising costs per kilowatt. In part, we have achieved this success by implementing strategies including careful control of airflow through our heating and cooling systems, by installing energy-efficient lighting throughout the building and by communication with and efforts by all our employees,” Glascock said.

NHRMC administrators anticipate energy expenses to result in about $264,000 in “additional costs” during the 2013 fiscal year, hospital spokeswoman Erin Balzotti said in an email.

“New Hanover Regional Medical Center is consistently looking for ways to improve energy efficiency while ensuring we maintain ideal temperatures for patient comfort and safety,” Balzotti said. “We have a sophisticated building management system for NHRMC and Cape Fear Hospital that reads the outside conditions and automatically adjusts the heating and cooling systems, and we continuously monitor our equipment and systems to make sure they’re working at peak performance.”

Small business owners also are being vigilant about their energy expenses.

“I get a reminder about every 30 days where energy costs are going. It’s called my bill, and in the last 10 years, it’s increased very significantly,” said Michael Davis, co-owner of three restaurants in the Wilmington area, including Jackson’s Big Oak Barbecue at 920 S. Kerr Ave.

“We think a lot about costs. It’s ever-present in my mind,” Davis said. “Power bills are a big concern with us. When you get a couple thousand-dollar energy bill, it equates into the cost of doing business.”

Jessie Williams is owner of the Edge of Urge apparel store at 18 Market St.

“Yes, our energy costs have risen over the years. Since we do not own our building, we conserve energy in the ‘old school’ fashion,” Williams said.

She said those steps include the use of energy-efficient light bulbs, unplugging electronics when not in use and only heating and cooling spaces that are in use.

“In a perfect world where money was not an issue, we would put solar panels on the roof, replace the windows, insulate the building, consider things like a tankless hot water heater [and] further revamp our space with eco-friendly and repurposed materials,” Williams said.

In the Cape Fear area, many homeowners and businesses rely on heat generated by electricity.

It remains to be seen how the recent merger of Progress Energy with Duke Energy, forming the country’s largest utility, will factor into the energy price mix on a long-term basis.

“The merger will not create rate changes. However, the costs of producing and delivering electricity continue to rise, and both utilities have previously scheduled rate increase requests that will be filed later this year and next year in the Carolinas,” Duke Energy officials said. “Over time, the savings produced by merging the companies will reduce the impact of price increases.”

The merger, however, has created a dustup in the company’s management structure. Just after the merger closed this summer, Progress CEO Bill Johnson was replaced by Duke CEO Jim Rodgers. It was announced last week that Rodgers will step down as part of a settlement with the N.C. Utilities Commission, which has investigated how the merger was handled.

Power rates did change some recently as part of a adjustment for fuel costs.

As approved by the N.C. Utilities Commission, the bill for a Progress Energy residential customer using 1,000 kilowatt-hours (kWh) per month will decrease from $105.15 to $104.06. Commercial customers, however, saw a small increase of 0.2 percent, and industrial customers saw a 0.6 percent increase.

In October, Progress Energy filed a request with the state regulators to increase the base rate portion of  customer bills to reflect investments made to modernize the power system and other increased costs of providing service.

The utilities commission has scheduled public hearings on that request in February and March 2013. If approved, the increase is expected to take effect in mid-2013, utility  officials said.

“We do know that the price of producing and delivering electricity continues to rise. We have a pending rate increase at Progress Energy Carolinas – the first in 25 years – and have asked for about a 12 percent rate increase, on average,” Duke Energy spokesman Mike Hughes said. “But we’re doing all we can to mitigate cost impacts on customers through energy-efficiency programs, cost-cutting measures we’re implementing in our company and other measures.”

Progress Energy also is in the process of implementing a strategy to retire older coal-fired power plants, including the three coal units at the Sutton Plant near Wilmington, and replace them with natural gas-fueled plants.

Jim Warren, director of NC WARN, a critic of Duke-Progress Energy, said the company claims the merger “strengthens the corporation.”

“Since its business model is to aggressively invest in unneeded power plants” that would be funded by rate increases, Warren said. “NC WARN believes residential customers in the Progress region could easily see 60 to 80 percent increases in rates over the next decade.”