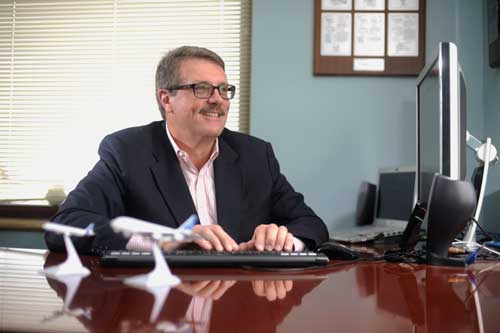 Combining forces: Tobin Geatz enrolls people in clinical trials, while physicians work with the patients. Under a merged Inclinix PMG, the functions take place under one company umbrella.

Wilmington-based contract research organization Inclinix recently merged with PMG Research, a company that operates 30 clinical trial facilities including four in Wilmington, in a deal that cost more than $10 million and is described by company officials as a game changer for the pharmaceutical industry.

Inclinix, a niche contract research organization, or CRO, specializing in patient enrollment, was founded in 1999. For the past six years, the company has broken even, but 2011 was a record year that drew growth in earnings, officials said. The company expects earnings to double this year over last.

It is rare for a CRO such as Inclinix, which coordinates the marketing efforts for patient enrollment, to own the sites where patients partake in clinical trials, Geatz said.

“It is a new model that I haven’t seen before,” said Susan Roberts, associate professor of clinical research at University of North Carolina at Wilmington’s College of Health and Human Services.

Most CROs don’t want to bear the responsibility for the doctor-patient relationship at the site level, Geatz said.

“To me, it’s owning the one mandatory thing. It’s the gold. It’s the human relationship that makes a patient do this unnatural act. I can’t imagine being in drug development and not owning [the clinical trial site],” Geatz said.

He will rebrand the company and hopes to complete another acquisition before the end of the year.

Inclinix PMG sees the potential growth of clinical sites in the Southeast and is pursuing opportunities to buy existing sites in Georgia, Florida or South Carolina, Reiniche said. Inclinix PMG would like to develop a new site from the ground up further down the road, he said.

PMG Research grew its site networks through acquisitions of existing sites and growing them itself. Inclinix saw PMG Research as the foundation from which additional sites would sprout.

“There’s a trend for private equity to get involved in the whole clinical research realm,” said Reiniche citing the acquisition of Wilmington-based PPD by private equity firms The Carlyle Group and Hellman & Friedman for $3.9 billion in October.

And, this trend signifies opportunity for Inclinix and the industry.

“We anticipate that a rapid consolidation of professionalization and size of site networks will take place over the next 10 years,” Geatz said.

He described the merger as a strategic move for his company because PMG Research had the procedures, data and financial management systems that would enable Inclinix to make additional acquisitions.

“It’s been my vision for a while,” Geatz said. “It’s mind-boggling to me that it’s never happened. It seems so logical.”

Last spring, PMG Research’s president and chief medical officer, Dr. Thomas Littlejohn III, was killed in a chartered plane crash in High Point. He was en route from Wilmington to Winston-Salem, where PMG Research was headquartered.

His death prompted the company to go up for sale in January, said Jennifer Byrne, president and chief operation officer over the PMG side of the newly merged company.

“There was interest in the company when we went for sale that was far beyond what Dr. Littlejohn and I would have ever even imagined,” Byrne said. Financial investors were interested as well as others in the pharmaceutical industry. But she declined to disclose details of those other offers.

“Inclinix represented the best opportunity for partnering with us as a company and bringing these synergies together and building together what will be a world-class game changer at the site level,” she said.
A group of investors led by Charlotte-based equity firm Frontier Capital raised more than $10 million for the acquisition, according to a news release.

This is the second acquisition in Inclinix’s history.

Its first acquisition was in 2006 when it acquired software company Real Interface Expert Systems in Annapolis, Md. But that division no longer exists, Reiniche said.

PMG Research has conducted clinical research trials since 1979. It now operates sites in 10 cities in North Carolina, South Carolina and Tennessee. The company has enrolled patients in clinical trials in Wilmington since 1997 and has four sites here including one based at Wilmington Health.

“We’re educating doctors and the public and trying to get over that vast concept out there that being in a research study is like being a guinea pig. It’s the furthest thing from that,” Byrne said.

The southeastern office of the N.C. Biotechnology Center has helped convene the group made up of physicians and CROs including Inclinix PMG.

About 88 clinical trial studies currently are recruiting individuals in Wilmington. Ten of those studies focus on diabetes, 25 relate to a type of cancer and the rest vary across disease states.

Many clinical research sites are owned and operated by physicians, who can get bogged down with the administrative and finance responsibilities of running the site, Reiniche said.

“Our ultimate goal is for the future acquisitions to have partial ownership with physicians,” he said.

PMG Research entered the merger with more than 450 active contracts, while Inclinix had about 14 projects. PMG Research’s contracts, however, were smaller dollar amounts than Inclinix’s, Geatz said.

“For every contract we accept, we rejected three because we didn’t have the confidence in enrollability,” Byrne said. “We might, as a site network, (now) make some of those decisions differently (with) the additional resources, the problem solving abilities and acumen coming from Inclinix.”