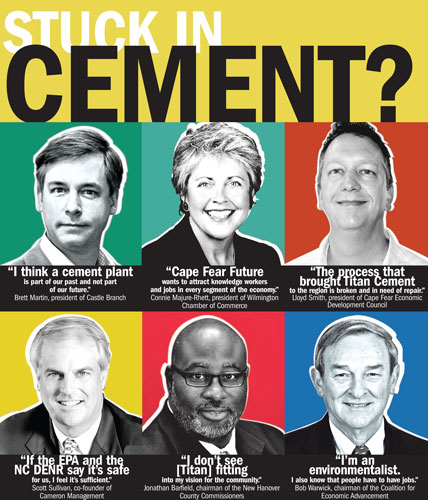 Local business leaders are divided over the merits of the proposed Titan cement plant.

A proposed cement plant is stuck in the middle of one of the major debates of our times: How to create new job opportunities in ways that won’t harm the environment?

While local environmentalists have come out in vehement opposition to the project, the Titan debate has also split the business community down the middle.

Some see it as a job creator and argue that today’s cement plants are nowhere near the smoke-spewing behemoths of the past. Other business people see it as a step backward that could be harmful to the health and image of this region.

“I felt like Titan was not getting the appropriate support in the Wilmington area,” Warwick said when asked why he formed CEA in 2009.

He sent out letters last month to local business leaders inviting them to join the organization. However, the letter makes no mention of the group’s stance or work in support of Titan. Prominent business people, including PPD founder Fred Eshelman and

Jeff James, CEO of the area’s largest physicians’ group, Wilmington Health, were listed as members of the executive committee.   Calls to Eshelman for comment were not returned.

However, James said when Warwick asked him to join the coalition two years ago, he was not told of the group’s stance on Titan. James said he does not have enough information to form an opinion on the controversial issue.

“I feel like they’ve misrepresented my part in this organization and as a result we are seriously considering revocation of our membership,”  he said. “If my name is going to appear, I’m very much in support of responsible economic development, but not   necessarily in support of Titan.”

Does Titan fit into our future?

Warwick has been volunteering with economic   development recruitment here for about 50 years. He has been involved specifically with the cement project in Castle Hayne since 1991.

Warwick went to Raleigh to assist the company in meetings with the state Secretary of Commerce and the Department of Environment and Natural Resources (DENR) around 1991, as a board member of the Committee of 100, which later became Wilmington Industrial Development.

“In the process, I got to know a lot of people with Titan,” he said. “They impress me to be very good corporate citizens.” He said he has not worked with the company since then.

At that time, he recalled there was strong support in the community to open the cement plant, because of the potential it held for new jobs.

But today, the community is divided over the issue.

Shar Olivier, a board member of the relatively new economic development organization Cape Fear Economic Council, said the dispute over Titan is part of a larger debate.

“The Titan proposal and the surrounding ideological struggle are symptomatic of the fact that our elected public servants need a clearer vision for the region’s future and a process with local checks and balances to control the future direction of our economy,” Olivier said

Speaking for himself, Jonathan Barfield, chairman of the New Hanover County Commissioners said, “I don’t see [Titan] fitting into my vision for the community.”

Warwick and many Titan supporters believe that state and federal regulations currently in place are enough to protect the environment and the public’s health.

Barfield disagrees. Relying solely on state and federal regulators to protect our natural environment is not enough, he said. “We need to have a voice in industry coming in as well,” Barfield said.

That is why the county planning department is in the process of updating its industrial zoning regulations, potentially requiring new industries to apply for a special use permit before building.

Warwick sees this as bad for business, especially for Titan.

“Frankly, the zoning ordinance is all about stopping Titan,” he said.

Barfield said the ordinance doesn’t aim to stop any one project. However, he points out two schools have recently been built within a half-mile from the Titan site.

Although the proposed ordinance was going to be presented to county commissioners on August 1, that date has been pushed back, because the planning department needs more time to work on the proposal and to hold a public hearing, Barfield said.

Everyone seems to agree that creating jobs and protecting the   environment are important.
“We definitely want to be a business-friendly community while maintaining quality of life,” Barfield said.

How to strike that balance is the question. What types of new businesses the Cape Fear region attracts has been a recent hot topic among many groups.

Co-founder of Cameron Management, Scott Sullivan supports the Titan project. “Our county is telling Titan we don’t want them and we will change rules and laws to keep you out,” he said. “So if I am the leader of a business looking to relocate my business and the first person I need to send to investigate a community is my lawyer, I think I would choose some other location.”

Cape Fear Economic Development Council President Lloyd Smith said community members and leaders need to reassess whom we recruit and how we recruit them.

“More important than this one project, it is my opinion that the process that brought Titan Cement to the region is broken and in need of repair,” he said.

He sees a need to clearly identify what types of industries we want to grow here and actively pursue them. He also sees a need to catalogue, understand and cultivate the existing industries especially relating to technology, medical, contract research and call centers.

“We’ve already had success with those. Why aren’t we pursuing more?” he said.

His organization’s mission statement says: “We acknowledge the industrial, economic and cultural past of the Cape Fear region but work to move the region toward a prosperous future in the new economy.”

“A cement plant is part of our past and not part of our future,” he said. Martin is deeply involved with the university as a visiting entrepreneur and board member of the Cameron School of Business. He sees the need for jobs, especially for recent college graduates here.

Warwick, who served on the UNCW Board of Trustees for about eight years from 1989 to 1997, shares that concern.

“We have a lot of young people graduating from UNCW and Cape Fear Community College who cannot find a job in the area. We need to do things that encourage job growth that pays people,” Warwick said.

But Martin said today’s students are being prepared for careers in high-tech, service, or pharmaceutical industries.

“The graduates coming out of those two institutions are preparing for a knowledge-based company, not a cement plant,” Martin said.

Earlier this year, four physicians spoke on behalf of 250 local doctors concerned about the health hazards and air quality that could be caused by emissions from Titan’s smokestack.

“Even if [Titan] follows their currently applied-for permit to the letter, our area will experience pre-mature births, decreased lung capacities for children, increased asthma and hospitalizations and premature cardiac disease including fatal and non-fatal heart attacks,” said Dr. Fred Opper at the county commissioners’ meeting on February 21.

On April 6, the New Hanover County Board of Health passed a resolution calling for stricter local and state regulations that “scrutinize all prospective businesses and industries that will include or result in any discharges of known or potential contaminants, pollutants and/or toxics in the environment.”

“[Our doctors] are the sharpest minds in the community. We trust them with the lives of our children and our parents,” Martin said.

Sullivan said there’s nothing wrong with the existing rules.

“If the EPA and the NC DENR say that it’s safe for us, I feel it’s sufficient. Those are the rules,” he said. “The new standards keep   getting more and more restrictive.”

He joined the Coalition for Economic Advancement when it was formed and had the chance to visit the Titan cement plant in Roanoke, Va.

“Everything around it looked beautiful and green. It didn’t have an industrial look to it,” he said. “There were two smokestacks and a little whisper of smoke coming out.”

Martin, however, shows little sympathy for the cement company, even though the land it purchased for the Titan plant is in an   industrial zone.

“Tough luck, you don’t always get what you want,” he said. “Usually the good of the community is more important than the benefit to a single individual.”