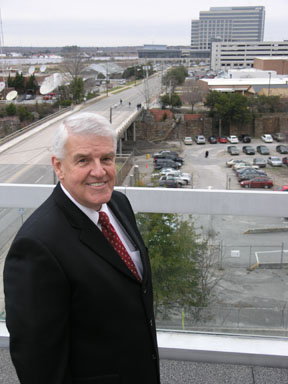 When Dr. Eric McKeithan became the college president in 1994, he inherited a cramped campus and a consultant’s study that advised the college to leave the downtown business district and head for the suburbs.

That suggestion had local merchants up in arms, predicting economic doom and gloom, McKeithan said.

Leaving, however, had been only the first of the consultant’s recommendations. The second, McKeithan added, was for the college to stay put and grow in place.

Trying to grow a campus on an urban space defined by a river, a railroad right-of-way and a grid of city streets has not always been easy. The need for expansion and the college’s ability to acquire property were limited. In 2005, voters said no to a bond issue following a public town/gown tussle after the college asserted its right to acquire property by eminent domain.

Voter turnout also may have helped. Only nine percent of voters turned out in 2005, McKeithan said, when “only five percent can beat you.” Low voter turnout was not the case in last November’s election.

Dave Spetrino, CEO of Plantation Building Corp. believes the college is doing a better job of public outreach. As the college partners with local businesses to train their employees, CFCC’s reputation has grown, perhaps in no small part due to its 96-percent job placement success for its graduates.

Whatever the reason, the college is poised for significant expansion, both at its downtown campus and its northern campus (see box).

Priority one on the college’s construction list is an updated version of the old Union Station building. It will be called, appropriately, Union Station. At 139,000 square-foot building, and costing $57 million, Union Station will contain humanities and fine arts classroom as well as centralized student services such as financial aid, counseling and job placement. Preliminary plans include a possible 2,500-seat auditorium – a matter that is still under consideration, said CFCC’s Public Information Officer David Hardin.

The Life Sciences Building is the second proposed building on the downtown campus and it will mirror Union Station in approximate size and cost. As the need for health-care professionals increases, CFCC wants space to grow its programs graduating registered nurses, practical nurses and a wide-range of health-care technicians.

When asked why the price tags appeared to be high, Hardin said not only must the college meet higher construction standards than say private construction; the estimated cost includes all interior equipment for labs and classrooms as well as a set aside for operating costs.

Today the college occupies much of what was once the terminus of the railroad. Located on 25 acres, the campus was at the “end” of the downtown district. Now, with PPD’s headquarters building to its north, the proposed convention center to its west and the continuing renaissance of the near north side, the college is no longer the “end,” but directly in the middle of what’s going on and going up in Wilmington.

With any urban campus, foot and vehicular traffic can be problematic. And parking, as many students and visitors will attest to, is an issue. The college has begun construction of a 400-car parking deck located at Nutt and Red Cross streets behind the former Wilmington Police Headquarters.

Not part of the recently-approved bond issue, the parking deck will go up, not out, something for which the college has been criticized for in the past.

When the college swapped its land with the city to facilitate a PPD parking deck, the college received three city-owned building betweens Bladen and Harnett streets plus the police headquarters. While the three buildings revert back to Wilmington this year (2009) and their classrooms absorbed into current or proposed structures, the college also has plans for the police building.

Renamed the ACL (Atlantic Coast Line) Building after its original tenant, the structure is currently vacant. Since its construction is outmoded, the college plans to demolish about 60 percent of the building in order to accommodate art studios, a computer lab and faculty offices.

The college also owns two acres of prime riverfront property – currently housing the culinary, hotel and restaurant management, boat building and marine technology programs. While development of this property will not be easy or inexpensive due to environmental concerns, one day the college hopes to build larger, multi-story classroom space and become a focal point of the Riverwalk.

With 6,000 students and a full-time staff of 450 and several hundred part-time employees and a total enrollment of 25,000, McKeithan said the college puts a lot of feet on the street every weekday and brings more people downtown than any other site.

Spetrino is cognizant of that. As a CFCC neighbor since he began his business in Wilmington more than a decade ago, Spetrino said the college, “is a great neighbor, a neighbor I rely on.” The area around the downtown campus, he observes, has become more urbane, a somewhat a “laptop and latte,” urban spot.

John Hinnant, executive director of Wilmington Downtown Inc., said there are retail opportunities adjacent to the campus that could not only serve the college, but tourists and others who work downtown. Local coffee houses and restaurants are currently the main beneficiaries of student spending. And while Hinnant believes the downtown might be too small to lure a Gap, for instance, he thinks mom-and-pop stores could capture student traffic and their dollars.

Those students, however, only attend classes during the week. Weekends leave the area quiet, but not a “ghost town,” Spetrino argues. Both he and Hinnant think that plans that include an auditorium in Union Station that could host concerts and special events would bring many of those feet back on the street on Saturdays and Sundays.

For the foreseeable future, when CFCC grows its campus, it will grow vertically and become a part of Wilmington’s new and taller skyline.

CFCC’s north campus, located on Blue Clay Road, currently is the site of the school’s engineering and technology programs, its truck driving school and soon, its cosmetology program.

A 153,000-square-foot, $50 million building, the advanced and emerging technologies center, is the school’s number three priority. The building will add additional space to existing programs and allow the school to add new programs as the training needs of local businesses demand.

Future plans, not included in the recently-approved bond issue, call for a safety training classroom, an arts and sciences center, instructional and student support services, a small business incubator and a maintenance/groundskeeping field house.