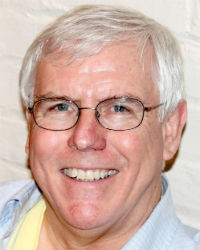 Cleve Callison, station manager at WHQR, plans to retire by this summer. (Photo courtesy of WHQR)

The station manager of WHQR Public Radio plans to retire by this summer.

Cleve Callison, who joined the Wilmington-based organization as manager seven years ago, said Tuesday that he plans to stay at work until the end of July. His resignation, which was accepted recently by the board of directors of station operator Friends of Public Radio Inc., is effective Aug. 15, according to WHQR's announcement.

"I wanted there to be a smooth transition process and give the board plenty of time to do a search," Callison said. "I think we're all committed to making the transition absolutely as smooth as possible."

Callison came to WHQR in 2010 after working as the general manager of WMUB public radio at Miami University in Oxford, Ohio, from 1997 to 2009.

In a story on WHQR's website Tuesday, Friends of Pubic Radio Inc. board chairman MK Cope said, "The Board is grateful for the monumental responsibility he undertook initially to lead the station at a very difficult time ... and to take it to much greater prosperity than anyone dreamed."

Callison said Tuesday that the worst of the station's financial troubles were stabilized by the time he came on board.

"Then it became a matter of just moving it forward. We never had a serious problem raising money; the problem was just controlling our expenditures of money," Callison said.

WHQR was founded in 1984 with studios and offices in a strip mall on Greenfield Street. Since Callison became station manager, WHQR added a classical music station (Classical HQR at 92.7 FM) and bought the third-floor space in the Warwick Building, 254 N. Front St., that it had leased since 1994.

A four-year capital campaign has brought in more than $2 million, including legacy gifts.

"The legacy gifts are what will, in years to come, be an extremely important part of the station's operations," Callison said.

He said the station has been able to make investments in technology, studio facility improvements and redundancies to cope with the possibility of outages and power losses, "but there's still a lot to do," tasks that multi-year pledges will help WHQR accomplish.

The Friends of Public Radio Inc. Board of Directors will soon name a search committee and then immediately begin a nationwide search for a new station manager, according to WHQR's announcement.