The project will grow the Port of Wilmington's capability to handle refrigerated containers from 300 to 1,000, once the project is complete, said Brian Clark, chief operating officer and deputy executive director of N.C. Ports.

The work is happening on the port's existing footprint near the Port of Wilmington Cold Storage facility, said Bethany Welch, spokeswoman for N.C. Ports. When complete, the project will consolidate the port's refrigerated cargo into one space, and add the ability to stack its refrigerated cargo, she said. 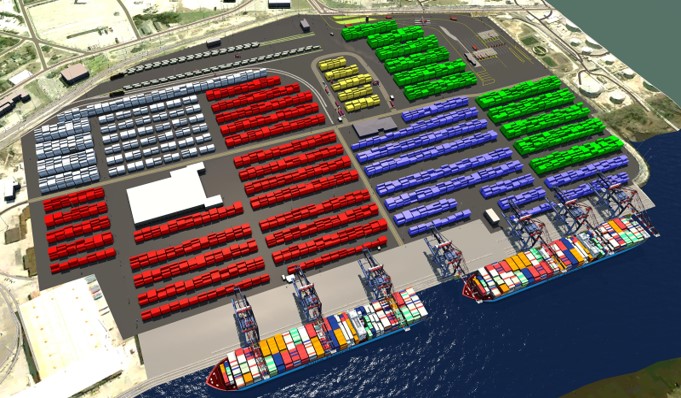 That work involved removing an old warehouse, followed by ground and paving work, which enabled the port to open the new container section and allow for more stacks of containers, she said.

The container yard expansion is included in N.C. Ports' more than $200 million capital improvement plan. At the Port of Wilmington, some work related to the capital plan is already taking place.

In April, the port received its third and final neo-Panamax crane. N.C. Ports is waiting for federal permit approval for the second phase of its turning basin expansion, Clark said. And work is ongoing to its berth improvements, which is slated for completion at the end of the year.

These improvements in the overall capital plan, when complete, will give the Port of Wilmington the capability to handle two 14,000 TEU ships at the same time.

The container yard expansion will give the port the ability to handle a greater volume of cargo that comes with the larger ships.

Construction on the new refrigerated container yard is slated for completion in early 2020, Clark said.

“All of these projects were designed with [our] efficiency component in mind,” Welch said.

The port will also add a new terminal operating system and gate operating system, which aim to enhance the efficiency of the container yard and gate, according to N.C. Ports.

“We're updating the way our trucks will move in and out. And that system that keeps track of where everything is going to go. So that again will allow us to move cargo around our terminal more efficiently," Welch said.