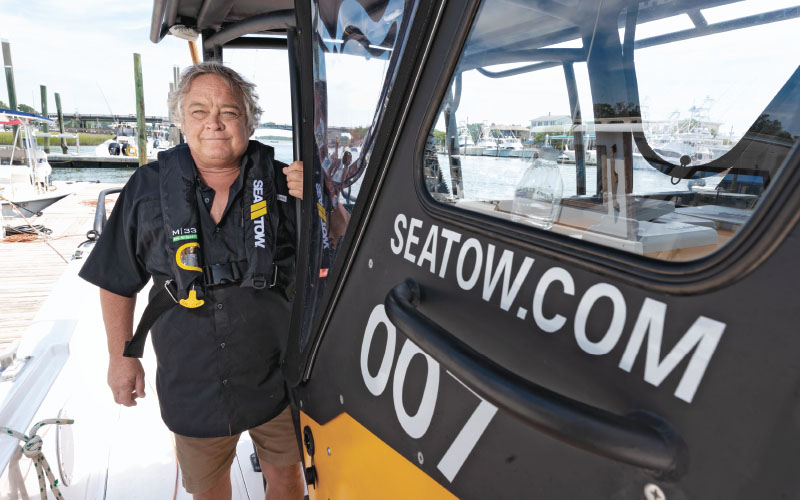 “We can have close to 50 calls come in on a busy day, not a holiday or anything like that. When we first started out, our first year in 1987, we may have had 50 the whole year,” Willis said.

Willis began as an independent towing operator in 1987, then started working with Sea Tow in its inception in the early 90s and later opened his own Sea Tow franchise when that became an option around the year 2000.

Recently, Willis and his team expanded with a second franchise covering the Crystal Coast, assisting areas such as Morehead City, Oriental and Beaufort.

“It’s unbelievable. Over Memorial Day weekend with the two franchises, we had 101 jobs come in. Maybe 15 or 20 canceled, but we were just slammed,” Willis said.

The type of calls varies to Willis’s Sea Tow, the “AAA of the waters,” a paid membership-based service that provides boaters with expert on-water service from licensed and experienced captains.

Running out of gas and running aground top the list of typical calls, according to Willis.

“People trust their gas gauges, but they can be unpredictable. They’re not accurate like a car. A lot of boats say they’re full or three-quarters of a tank, but it might only be a quarter of a tank,” Willis said.

Many of the problems that boaters have might often stem from lack of experience or lack of knowledge about boat mechanics and operation. Willis’s Sea Tow offers classes on boating basics, including anchoring a boat or using the radio, but are unable to hold them during the busy season. Many marinas will offer some education about boat operation as well, Willis said.

With or without experience and training, accidents do happen, and Sea Tow is there to help. Willis referred to a recent jet-ski accident that nearly claimed the life of a teenager, but a Sea Tow captain was able to step in and take some decisive action that led to saving the teen’s life.

“We are there to get to people, to their dogs, to whoever needs help and get them out of a potentially dangerous situation. We are skilled enough and have the right equipment to get there and help people,” Willis said. “We respond and we work closely with the Coast Guard, the Wildlife Officers and the Sheriff’s Department.”

Willis said he had no idea when he started towing that his business would grow as much as it has over the years.

“I am not some big shot. I was just a 19-year-old kid with sunglasses and a boat. I thought it was just something I’d do until I found a real job,” Willis said. “But people needed a service.”

Even in the off-season, Sea Tow stays busy, according to Willis. When they do have down time, Sea Tow workers use it as a chance to do their own maintenance on their fourteen boats.

“Sea Tows, bigger ones like us, do our own maintenance repairs. We have grown so much, we now have a full-time and a part-time mechanic,” Willis said. “We have 14 boats in total, but usually two or three that we’re working on, so we get by with 10 or 12 boats. Can’t possibly have them all out at one time; there’s always some out for repair.”

Hurricane season also keeps Sea Tow hard at work, but “luckily it falls when we’re not as busy in August, September and October,” Willis said.

Willis remembers when Hurricane Fran hit the North Carolina coast in 1996 and Sea Tows from around the country stepped in to help.

“The public saw it as Sea Tow handling it. We have our yellow boats and our uniforms, and even though we are from different franchisees, people recognize us,” Willis said.

“Since Morehead got a direct hit from the storm, we did a lot of clean up work on boats left in the water around Morehead City, and the town wanted us to get them out of the water and haul them out to the landfill,” Willis said.

In another example, Sea Tow also spent close to a month in the Topsail Island and Sneads Ferry area helping with hurricane clean-up efforts.

For a Sea Tow captain, every day is different with the exception of long hours and the possibility of dangerous conditions.

“People always say how lucky we are to spend our day on a boat, but we are not out there listening to music and drinking beer; we are out there 10 to 12 hours a day and you never know what you’re going to get,” Willis said.

That is one reason why Willis and his Sea Tow team implemented a life jacket policy. Every captain must wear an inflatable life jacket at all times. Sea Tow International agreed and made it a franchise policy.

“It is all about safety, and with a uniform, it naturally creates a sense of authority and gives a look of respect,” Willis said.

Respect is given as well as received by Willis and his team.

“Customers need us, and we don’t want to make them feel bad about their situations. We certainly get a better rapport when we have a quick and easy fix, try to remedy the situation, and get them back on their way,” Willis said. “With our skill and knowledge, 80 percent of the time, no tools and no parts are needed to fix the problem.”