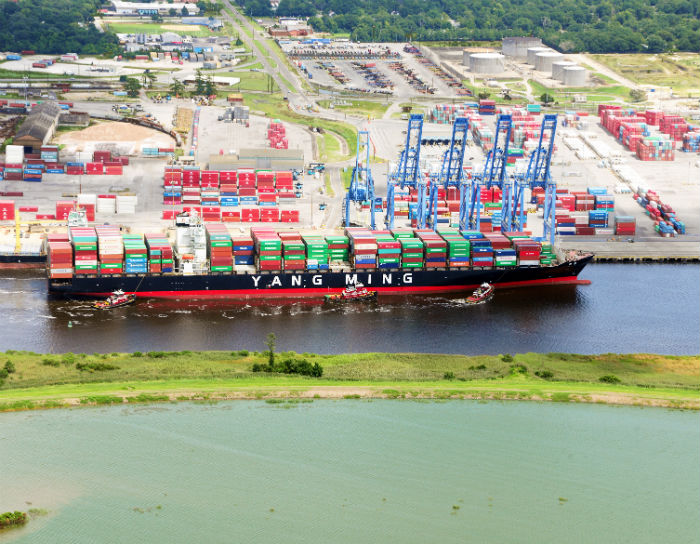 As a result of the port's turning basin expansion, The Yang Ming Unity on Sunday became the largest ship to date to call on North Carolina's ports, according to a news release Monday.

The Yang Ming Unity, which measures 1,101 feet in length and 140 feet in width and was carrying 8,200 TEUs, transited the new locks of the recently expanded Panama Canal on its way to the Port of Wilmington, the release said.

Part of the N.C. Ports' ongoing infrastructure investment plan, the turning basin expansion gives the Port of Wilmington the ability to host post-Panamax vessels with a length of 1,150 feet and a breadth of 158 feet.

“This is an incredible accomplishment for us at North Carolina Ports. We made a promise to our customers that this project would be done on time and we met that goal,” said Paul J. Cozza, N.C. Ports executive director, in a news release. “For this expansion to finish in just over six months and give us the capabilities it has is unprecedented in our business.”

The turning basin project included the removal of an existing bulk pier and dredging along the port’s side of the Cape Fear River to expand the turning basin from 1,200 feet to 1,400 feet.

Burgess Corp., a company that had planned to move from Jacksonville to Wilmington recently, was awarded the $14 million contract in December 2015 to do the work on the turning basin. In January, the N.C. State Ports Authority board agreed to spend up to $21.6 million on the project, but a final price tag was not available from the N.C. Ports as of Monday.

The expansion will typically accommodate vessels in the 8,000-10,000 TEU range, depending on the vessel’s profile, the release said. TEU, or Twenty-foot Equivalent Unit, is the standard unit for describing a ship's cargo-carrying capacity, with 20-foot and 40-foot containers being the two most common international container sizes.

“This is a commitment of support to our existing and future customers,” said Chief Commercial Officer Greg Fennell in the release. “We are making the necessary investments, we are big-ship ready and we will continue to handle these larger vessels deployed to the U.S. Southeast.”

Recent announcements at the Port of Wilmington reflect ongoing growth for the state's ports, the release said. After a banner year in fiscal year 2015, N.C. Ports saw its best-ever financial year in fiscal 2016, according to the release.

"Fiscal year 2017 is off to an impressive start as well with the completion of the turning basin and the recent return of intermodal rail service to the North Carolina Ports. The announcement by CSX of the Queen City Express brings a non-stop, double stacked train with overnight service to CSX’s intermodal terminal in Charlotte," the release said.

Gov. Pat McCrory traveled to the Port of Wilmington in July to announce the coming of the Queen City Express and talk about a new intermodal terminal planned for Edgecombe County called the Carolina Connector.