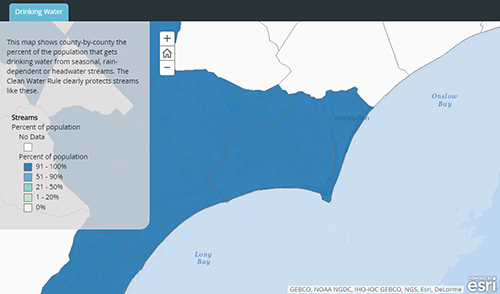 An EPA map, which the agency says helps explain the importance of Clean Water Act protections, shows the Cape Fear region. (Illustration courtesy of epa.gov)
Depending on who fields the question in the Wilmington area and beyond, revised federal rules governing small sources of water where larger bodies are born either have nothing to do or everything to do with keeping that water clean.

On Aug. 28, the day the Environmental Protection Agency and U.S. Army Corps of Engineers said they would begin enforcing the changes in North Carolina and other states, some in the local business community who oppose the measures looked to legal challenges for a potential reprieve from what they have described as a “land-grab.”

A temporary injunction granted by a North Dakota judge for 13 states, not including North Carolina, put the rules on hold Aug. 27 for those states only, according to the EPA.

“In other respects, the rule is effective on August 28,” according to an email from the EPA on Aug. 31.

Tyler Newman, senior governmental affairs director for the Business Alliance for a Sound Economy, called the North Dakota ruling “another strong statement on the flaws of the rule and the rulemaking process in this case. We are hopeful that governments, property owners, businesses and taxpayers in North Carolina get similar relief from these overreaching regulations.”

In July, the N.C. Department of Environment and Natural Resources had joined 10 other states in the U.S. District Court in Georgia in a complaint against the EPA and the Army Corps of Engineers “for exceeding their constitutional authority,” according to an Aug. 27 letter from DENR secretary Donald R. van der Vaart.

The letter asked that the office of N.C. attorney general Roy Cooper join DENR in fighting the rule change. As of Aug. 31, Cooper’s office had not done so. Meanwhile, district court judges in West Virginia and Georgia, where the case including DENR was being considered, agreed with the EPA and Army Corps that they lacked jurisdiction to rule in the matter.

“The Agencies [EPA and Army Corps] are evaluating these orders and considering next steps in the litigation,” the EPA said in the Aug. 31 email.

Despite the lack of a ruling, opponents of the changes were still hoping for future relief as of the end of August, said DENR spokeswoman Stephanie Hawco.

“We still have legal options,” she said.

Enforcement of the rules could have far-reaching effects on North Carolina’s economy, Hawco said.

“One of the consequences of this is that property values drop,” Hawco said. “If a potential buyer knows that the land they’re looking at could be subject to federal regulation, they’re not willing to pay as much for that land. Property  values drop for everyone.”

Hawco characterized the new rules as a “massive power-grab” by the federal government.

“North Carolina’s water should be in the hands of North Carolina, not in Washington, D.C.,” Hawco said. “We believe we do a better job of protecting and cleaning our water than the federal government.”

In the letter Aug. 27 to Cooper, Van der Vaart said the changed “waters of the United States” rule, also referred to as WOTUS, “ignores the role of the states in protecting water quality, imposes regulatory uncertainty, and will  unnecessarily stifle economic growth and prosperity with little, if any, environmental benefit. This significant expansion of federal jurisdiction will affect real property in our state, and is expected to have the greatest impact on farmland in Eastern North Carolina. If the proposed rule goes into effect in its current form, newly determined federal waters would become subject to state and federal regulatory programs. Large swaths of farmland could be swept into federal jurisdiction. Many more landscape features will become federally regulated under the proposed rule, resulting in reduced land values, reductions in productive land and increased costs for land use.”

According to the EPA’s stance, and others who support the rule, property owners have a responsibility to protect water sources.

“What you hear a lot of the development community talk about are these small, isolated ponds and ephemeral ponds and lands that don’t look like wetlands, but they’re hydrologically connected to other water bodies,” said Mike Giles, the N.C. Coastal Federation’s coastal advocate. “Those are critical parts of our ecosystem; those are critical parts of stormwater protection … these isolated wetlands and the headwaters, they’re the most important component of a clean water system.”

Giles said he disagrees that the rule is a “land-grab.”

“It’s a clarification on what are wetlands and how you can develop on the lands that surround those wetlands and are contained within,” he said.

Some examples of what the final revisions of the rule accomplish, according to the EPA’s website, are defining “tributary,” which the old rule did not do; including waters “adjacent to jurisdictional waters within a minimum of 100 feet and within the 100-year floodplain to a maximum of 1,500 feet of the ordinary high water mark”; and including Carolina Bays and pocosins “where there was a significant nexus to traditionally navigable water, interstate water or territorial sea.”

Giles said not protecting certain kinds of water sources can come with its own, very high cost.

The rule helps in the creations of places where people can live and in which they also desire to live, he said.

“They want to live in a development that’s natural and pleasing to the eye,” Giles said. “Without those protections, they won’t be able to.”

According to the EPA, the new rules can make development easier in some cases.

“Previously, almost any water could be put through a lengthy case-specific analysis, even if it would not be subject to the Clean Water Act. The rule significantly limits the use of case-specific analysis by creating clarity and certainty on protected waters and limiting the number of similarly situated water features,” the EPA says in a fact sheet about the change.

The agency also says, “The rule only protects waters that have historically been covered by the Clean Water Act. It does not interfere with or change private property rights, or address land use. It does not regulate most ditches or regulate groundwater, shallow subsurface flows or tile drains. It does not change policy on irrigation or water transfers. It does not apply to rills, gullies, or erosional features.”