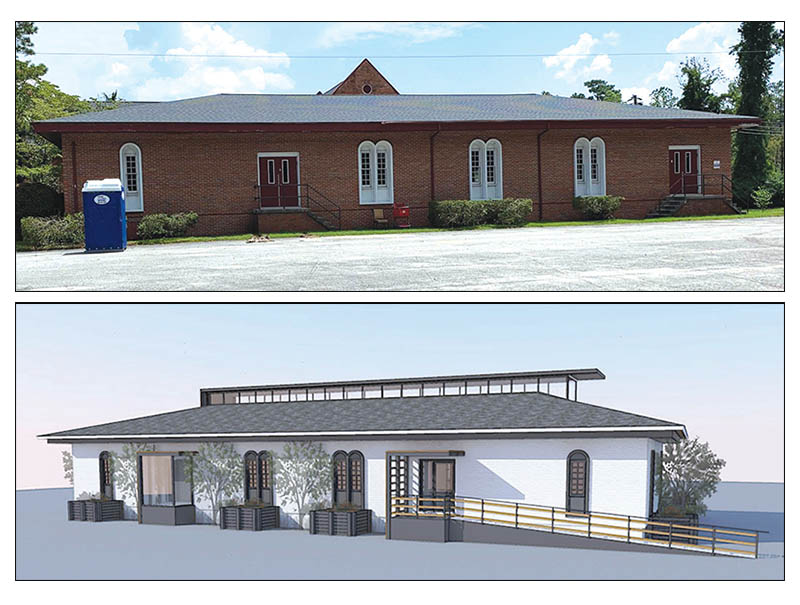 A rendering shows what the former fellowship hall (shown above before construction commenced) at Pearsall Memorial Presbyterian Church is being turned into, an office for Wilmington homebuilding firm PBC Design + Build. (Rendering c/o PBC Design + Build)
The last service at Pearsall Memorial Presbyterian Church, a Wilmington house of worship built more than 100 years ago, took place in June 2019. On a recent weekday this year, the whir and pop of saws and nail guns by crews working for a local homebuilder emanated from the 3-acre property on Market Street.

Wilmington-based PBC Design + Build’s creations typically provide custom spaces for other people, but this time, the church project is transforming part of local history into the firm’s future home.

Crews are working on making the former fellowship hall at Pearsall Memorial Presbyterian Church, 3902 Market St., into a new office for PBC Design + Build. Unlike the church sanctuary, which dates back to 1913, the fellowship hall was built in the 1970s.

“We’ve built hundreds of amazing custom homes for our clients, but we’ve never really had the opportunity to build a space for ourselves, some place that allows us to work for us for the next 20 years,” said Dave Spetrino, president of PBC. “For years we’ve been saving ideas and imagining ‘what we would do’ when given an opportunity to have a clean slate like this. So while we won’t modify the footprint or exterior walls, we’re doing everything else.”

That includes opening up the steel truss ceiling, bringing in light through a clerestory (a kind of raised skylight) at the ridgeline and then creating workspaces, Spetrino explained.

“The rectangular space with its high ceilings is wide open, completely barrier-free,” Spetrino said of the fellowship hall. “Designed by Leslie Boney Jr. in the late 1960s, it has this terrific mid-century modern feel without becoming a distraction to the adjacent historic sanctuary.

“It’s also probably one of the bestbuilt concrete and metal buildings we’ve seen locally – the guys who built this weren’t messing around.”

Other parts of the building will also be reused.

“There is a stage inside that will be fun to repurpose and having this high, clear span of open space is like a blank canvas,” Spetrino said. “We can showcase our work but also establish a space that not only increases our efficiency as a team but also encourages more creativity across our projects.”

The sanctuary and other buildings that were added to and grew up around the church over the years will be preserved, Spetrino said.

Giving a tour of the sanctuary, where pristine original pews are wrapped in plastic, Spetrino said he could see the structure one day becoming an event venue or destination restaurant like Indochine, a popular eatery north of the Pearsall property on Market Street.

So while the firm plans to fully use the 4,200 square feet in the fellowship hall, “we have no concrete plans for the sanctuary and other gathering spaces within the main church areas. We have some ideas but no clear path other than to ‘preserve and protect,’” said Spetrino, who also said he’s not in a hurry to make plans for the space other than preservation.

PBC Design + Build is moving from its current home of 314 Walnut St. (since 2012) in downtown Wilmington, likely in April or May.

“We’ve been downtown since 1994,” Spetrino said. “It’s nuts to think about it in terms of not years but decades. I don’t know that we look at it as moving out of downtown, more of a transition to a slightly more centralized location.”

Nevertheless, Spetrino is in for an adjustment, he said.

“My existing routines are fairly well set,” he said. “I walk to lunch daily, our attorney is next door, our surveyor across the street and the city offices and council chambers a block away. So the idea of ‘not’ being downtown really hasn’t hit me.”

At the same time, Spetrino said, the opportunities and reasons for PBC to be located downtown have evolved.

“Much of our work is no longer downtown like it was in the ’90s and early 2000s. For many years I think we felt a sense of loyalty or almost an obligation to be downtown,” he said. “Thankfully – and gratefully – there are a myriad of other players who’ve invested in downtown and will continue to do so.

“That wasn’t always the case. Today, and really no point in my own history has downtown been more stable and energized. The amount of attention and investment within the central business district cannot be understated.”

A number of other factors led to the decision by PBC to buy the church site in June for $745,000.

“We’ve always liked the church. It’s so out of place along that street that it’s like its own time capsule. When the opportunity came up to acquire it, it was an even easier decision based on our adjacent ownership of the 10-acre site,” Spetrino said.

A portion of the 10 acres is expected to eventually hold apartments in a community called Switchyard under development by Spetrino.

“We have some long-term plans to invest within that general area and being able to control the church site made sense,” he said.

Spetrino added, “Another big reason, and while I don’t always recommend it, was emotional. Certain sections of Market Street have really lost their cohesiveness with the surrounding growth in our area. The ability to acquire and preserve a cultural resource, especially one with such character and historical significance, is rare.

“We believe that protecting the church can only help in creating interest and a destination or ‘place’ for our future work – and residents – within that area.”