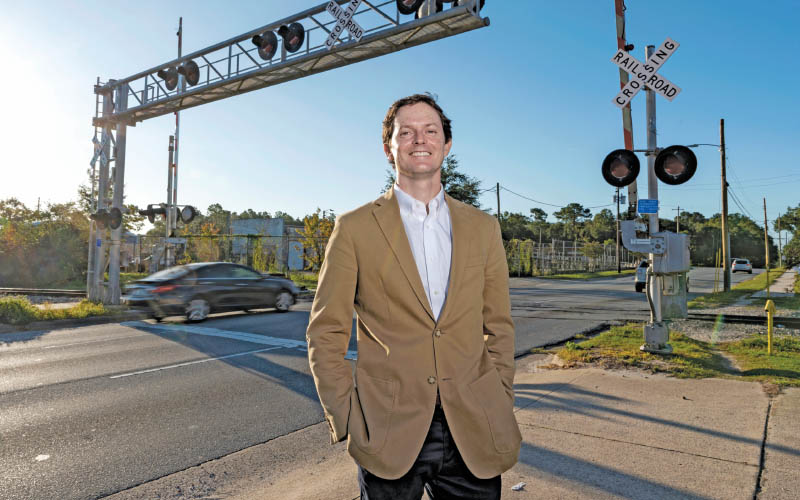 Aubrey Parsley, shown at a South 16th Street railroad crossing in Wilmington, was hired to be the city of Wilmington’s rail realignment project manager. (Photo by Michael Cline Spencer)
When the city set out to find a person to oversee Wilmington’s Rail Realignment Project, they were looking for a candidate with a unique skill set and a wide range of talents. Enter Aubrey Parsley, the man with the mission.

Parsley, the city of Wilmington’s rail realignment project manager, is the first person to hold this position and is charged with the task of moving commercial railroad tracks out of the middle of the city. It will likely require years of patience and political strategy.

Parsley spent the past eight years working at the headquarters of Norfolk Southern Railway in Norfolk, Virginia, one of only two big railroad operations on the East Coast. He divided his time between the marketing and strategic planning departments.

“During my experience there, I had terrific mentors that put me on a lot of projects that lend themselves very well to the city’s goals, including sales and line acquisition,” Parsley said. “With marketing, I worked to align goals between the railroad and customers, and I have an indepth knowledge of what it takes to transact, and used that commercial experience to put deals together with agreements that are mutually beneficial.”

Parsley is confident that the Wilmington Rail Realignment Project will be mutually beneficial to both the city and its residents.

Modernization or repurposing allows “a great deal of opportunity for revitalization efforts that take place around places like this,” Parsley said.

In August 2015, Glenn Harbeck, the city’s director of planning, development and transportation, introduced the idea of moving the rail line that cuts through the city to accommodate expected growth and economic development.

“The current track within the city includes 32 roadway crossings and carries trains at 4-8 miles an hour,” according to the city’s website. “Current projections show 8 round-trip, 10,000-foot trains a week by 2025.”

This would contribute to significant traffic delays across the city, increase the amount of toxic chemicals hauled through the city and deteriorate air quality in already densely populated areas, officials said.

The study’s results confirmed Harbeck’s theory, acknowledging safety issues of the current rail line, as well as the economic benefits of realigning the track across the river and more directly to the Port of Wilmington.

The proposal is to relocate 8.5 miles of railroad track and repurpose the track for alternative transportation such as a trolley or biking/ pedestrian paths. The existing tracks would be moved to a new 4- to 5-mile track across the Cape Fear River.

The city this year was awarded a $2 million grant from the Federal Railroad Administration (FRA), with a state match of $500,000, to cover environmental permitting and construction of a new freight line, according to Parsley.

CSX Transportation, the freight railroad that transports goods to the port and to whom railroad crossings belong, has been “responsive and collaborative,” Parsley said, and the company went as far as to provide the city a letter of support as part of the grant application made to the FRA.

Originally from Miami, Parsley, his wife and 5-month-old son joined his parents, who retired in Wilmington, to head this project and lead Wilmington’s railways into the future.

“The feasibility study wrapped up any fatal flaws moving forward and showed that this is fiscally and environmentally feasible. It is indeed a doable project,” Parsley said.

“In the near term, the budget for the project is $2.76 million,” he added. “That total represents the total value of the recently awarded FRA grant.

Those funds will go toward preliminary engineering and environmental permitting. We’ve been working hard these past three months on getting our grant agreements finalized as well as building a team of local, state and federal stakeholders around the project to aid in its progression,” he said.

Project proponents emphasize potential improvements to traffic congestion and affordable housing access as a result of the realignment, as well as increased trade and shipping opportunities.

“Revitalization efforts that take place around places like this allow for so many opportunities, including affordable housing. It sets a precedent for alternative and new development,” Parsley said.

When the time comes, public input will be sought to determine how to repurpose the former tracks. A greenway, trolley and light rail are all ideas.

“There is so much potential and so many good things that can come from replacing existing freight lines and repurposing freight quarters,” Parsley said. “When the project comes to fruition, Wilmington will have the opportunity to reimagine itself with a coordinating connection to communities and wonderful public spaces.”