Island Living: Some New Ideas For That Kitchen Focal Point

A centerpiece of most new kitchen designs is an island, which often combines multiple functions in one space. By taking the place of the kitchen table, islands designed for dining are revolutionizing the eat-in kitchen.

Megan Lewellyn, a kitchen and bath designer for Markraft Cabinets of Wilmington, said some new ideas are taking islands well beyond the free-standing countertop style. 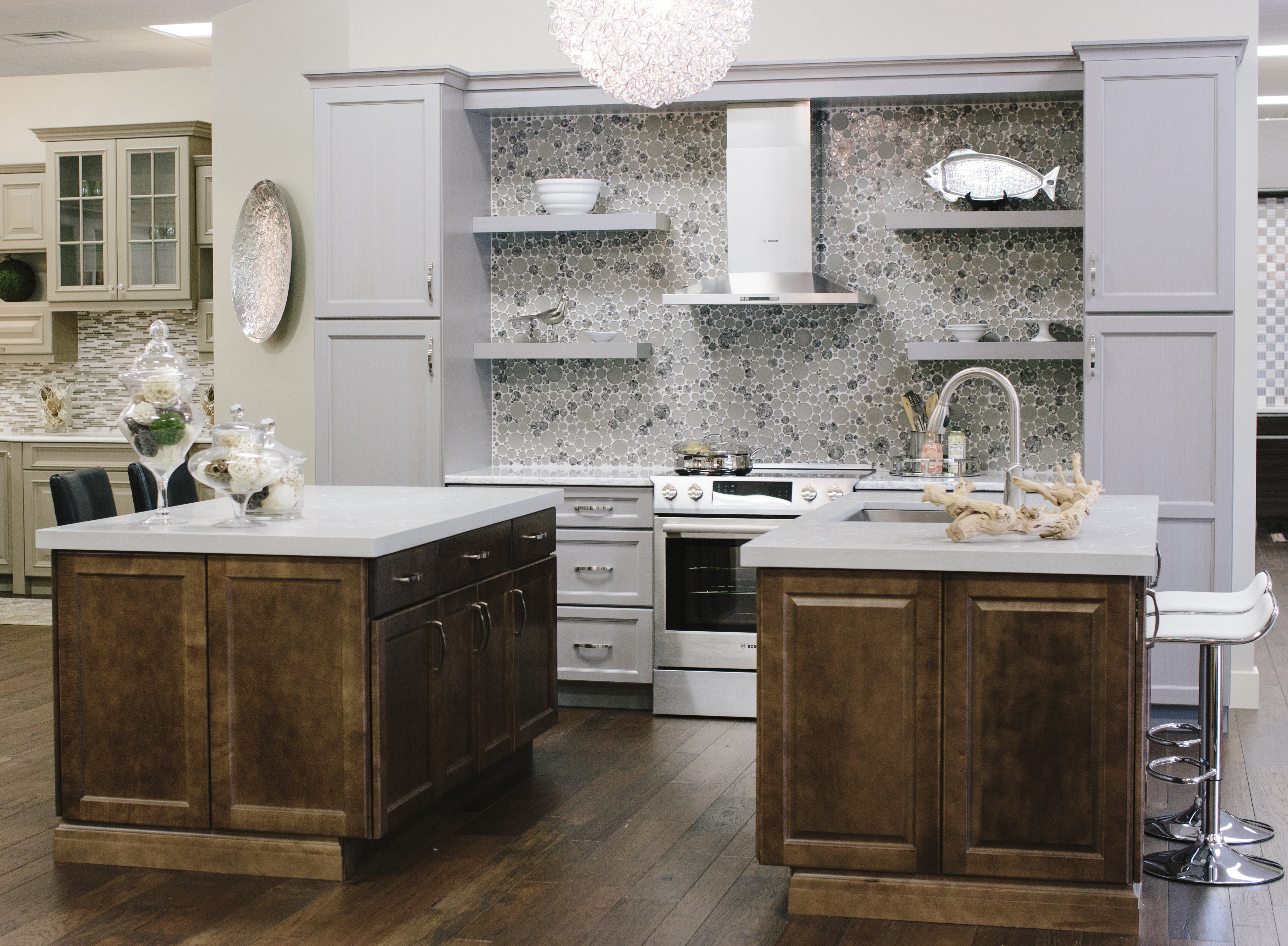 If it’s big enough to support multiple functions, like cooking, working and eating, an island might have a variety of surfaces, even at different levels. For example, some cooks prefer to do their chopping on a slightly higher surface than, say, rolling dough for baking. A butcher-block chopping surface might be a few inches higher than a marble baking-prep area, yet part of the same island structure. Those could each flank a cooktop to provide three work spaces.

A trend for islands is to use alternative materials so the island doesn’t have the same counter surface as the rest of the kitchen. In addition to marble and wood, materials such as glass can give an island a distinctive look.

While an island will be a feature in just about every new home, it may take careful planning to add one to an older, smaller kitchen. The most important measurement, Lewellyn said, is the open space around the island. That must be a minimum of 36 inches, and ideally 42 inches or even 48 inches if multiple people will be working in that space.

The smallest practical island is 24 inches by 36 inches, a size that will make it strictly a prep space, she explained.

An alternative for some small kitchens is a “peninsula.” This functions like an island but is attached at one end to the main countertop and base cabinets. Typically this sort of layout won’t have overhead cabinets, so the surface is accessible from both sides.

That gets to the idea of using an island as an eating space, with chairs or stools to use for casual meals. In designing an island for dining, Lewellyn suggested asking yourself, “Will it be cozy to eat at?” Beware of a layout that puts all the seating on one side; simply adding a curved edge can keep the space from feeling like a lunch counter.

One idea she has used to create intimate dining spaces is to include a semi-circular top, supported by a pedestal, at one end of an island. You also can add banquette seating on one side.

An island may have a distinctive look compared to the rest of the kitchen. Different materials or colors can distinguish the top from the other counters, or give the supporting cabinets a contrasting look. Furniture type islands can add visual interest.

A trend in some bigger kitchens is to create multiple islands. “You could have a million reasons for this,” Lewellyn advised. “It could be a way to fill a space so you don’t have a ‘naked’ kitchen.” One island could be set up entirely as a prep space for the cook, and a second one dedicated to dining.

At the other end of the size scale is a European look that’s becoming popular in cities where living spaces can be compact. This involves a moveable surface with mechanical or hydraulic controls. A simple countertop might cover the sink and stove, but slide away to create an overhanging bar for eating, at the same time exposing the cook’s work area when needed.

When considering where to put an island and what features to include, it’s important to know where the utility connections are and whether it’s practical to move them or install new ones. A sink will require a drain and water supply; any island with cooking space will need a hood or other form of ventilation.

If in doubt, an experienced kitchen designer can suggest practical ways to make a kitchen island fit both your space and lifestyle.

For more kitchen island styles and ideas, visit Markraft’s Design Center and talk to a professional designer. That showroom is open from 9 a.m. to 5 p.m., Monday through Friday, at 2705 Castle Creek Lane, just off Castle Hayne Road.

Since 1985, Markraft has specialized in cabinet and countertop design and installation in residential and commercial construction and custom remodeling. To learn more about Markraft, go to www.markraft.com. Contact Markraft at 910.762.1986 and like Markraft on Facebook at https://www.facebook.com/MarkraftCabinets.

Other Posts from Markraft Cabinets

Get Organized with Space Saving Designs

Design on Display at Parade of Homes

Outdoor Living on Display at Markraft

Get Creative with Kitchen and Bath Designs

Customers are the 'Core' of Markraft's Mission

Remodeling Results Are Worth The Challenges

Markraft Style On Display In Parade Of Homes

Essential Allies For Your Kitchen Remodel

Elegant Kitchen Design Is A Product Of Invisible Teamwork

Remodeling Peace Of Mind: Knowing What To Expect, Who to Call

Before Remodeling Your Kitchen, Ask These Questions

Plan Ahead For Technology In Kitchen And Bath Design

Be Prepared: What To Expect From A Kitchen Or Bath Remodel