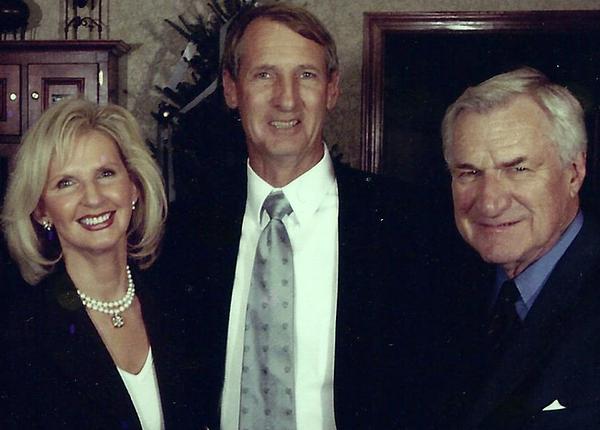 As I was walking out of my office to find some quiet time at Barnes & Noble to write an Insights article for the next issue of WILMA Magazine, I received a phone call from my good friend Craig Snow. Knowing that my WILMA deadline was the next day, I assumed that he was calling me, as he usually does, with a friendly reminder. Well, I was wrong. He was calling because he knew that the recent death of my college coach, Dean Smith, had to be affecting me and he just wanted to let me know that he was thinking about me.

This kind gesture by Craig reminded me of Coach Smith because it was exactly the type of thing Coach often did: reach out to people in their time of need. These thoughts led to other memories of Coach, and I decided to use this month's column to share a few of those many memories.

The first comes from a round of golf we played at Eagle Point Golf Club a few years ago. Coach had hit his approach shot into a very deep greenside bunker and was having a hard time maintaining his balance and then climbing out of it. I, of course, was offering some assistance, but his pride would not allow him to admit that he needed help.That was just a few weeks before he had knee surgery, from which he never completely recovered.

Later, after we had finished play and made our way to the locker room, four strangers who had been several holes ahead of us on the course were waiting around for the opportunity to see and speak to Coach Smith.As always, he was very gracious and after a few minutes of conversation in which one of the men mentioned that his special needs son loved Tar Heel basketball, the strangers left. After we finished changing into our street shoes Coach looked up and asked where the man with the special needs son had gone.When we told him they were probably in the parking lot, he immediately asked us to try to catch him so he could get his address.We did catch him and I'd bet my life that, within a week or so, that young special needs Tar Heel fan received a special memento from one of the most famous coaches of all time.

Finally, my most special memory of Coach is related to what the writer, John Feinstein, wrote about after a conversation he had with Coach Smith, during which John asked him about the times in the 1960s when he was standing up for African Americans in Chapel Hill. According to Feinstein, Coach first asked how he knew about that and, when John responded that the minister had told him, Coach's response was,“I wish he hadn’t done that.” John then said, “Dean, you should be proud of doing something like that,” and Coach responded, "John, you should never be proud of doing the right thing. You should just do the right thing."

We will all miss you Coach!

Jim Moore is the president of the James E. Moore Insurance Agency. Established in 1954, it has become one of the most trusted independent insurance agencies in North Carolina. The James E. Moore Insurance Agency is a family-owned business and offers homeowners, automobile, life and health, employee benefits, and commercial insurance products. For more information, call 910-256-5333 or visit the agency's website at www.jamesemoore.com.

Other Posts from James Moore Jr

Why We Should All Do More To Help Others

Are Our Wind Insurance Premiums Really Too High?

Expect To See An Increase In Flood Insurance Premiums

Property Damage And Privacy Are Insurance Concerns For Drones

Should You Buy A Damage Waiver When Renting A Car?

Travel Insurance Can Protect Against Loss

How Can You Tell If Your Insurance Company Is Healthy?