Housing As A Health Concern 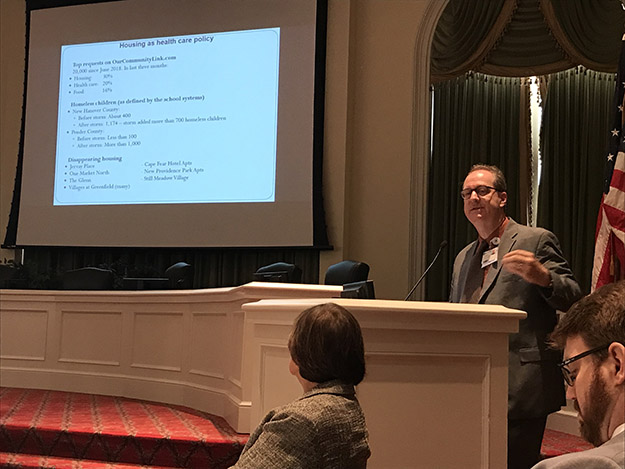 Efforts to push affordable housing into the public policy spotlight are on the rise in the city this year, with the region’s largest employer and health care provider weighing in on the topic during a recent session hosted by the Cape Fear Housing Coalition on Jan. 17 at City Hall in downtown Wilmington.

While officials at New Hanover Regional Medical Center don’t want to be in the business of building housing, it is a concern for the health care organization for numerous reasons, said Scott Whisnant, NHRMC administrator of community affairs, during the CFHC event.

Giving an example of the kind of impact homelessness can have, Whisnant said one homeless patient alone made 131 visits to the emergency department.

“It’s costing you because when we have to fund this we have to recover our costs so everybody who pays for health care is paying for this,” Whisnant said.

He said the hospital has been trying to work with the resources that already exist in Wilmington, including working with a local recuperative care facility, where homeless patients who are ready to be discharged but not well enough for life on the streets can receive shelter and care, that is operated and owned by churches.

The hospital also has become more involved in the area’s coordinated entry list, a list compiled by various agencies, which at the time of Whisnant’s talk included more than 60 people who have been validated and screened and are waiting in line to get housing.

NHRMC recently used a $50,000 donation it was given to help shelter and provide needed funding to some of those who lost their homes during Hurricane Florence.

Another reason why affordable housing is a health issue is the toxic stress that can be caused by homelessness or home insecurity, Whisnant said.

But there are multiple problems standing in the way of affordable housing in the area, he said.

“Maybe we can come together and work on fixing them,” Whisnant said. “We’re unclear as a community on how to create affordable housing.”

Rogers gave a presentation Jan. 22 to Wilmington City Council on the topic of affordable housing.