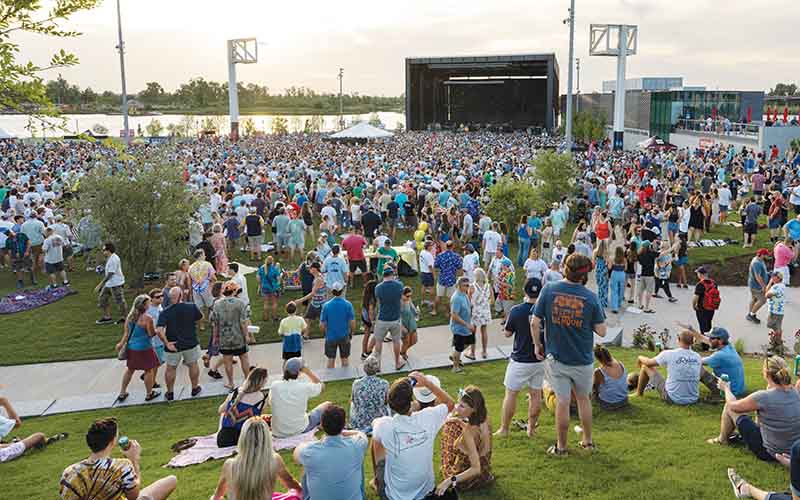 And during the sold-out Widespread Panic show last month for the debut of the city’s new Riverfront Park and amphitheater, The Hive not only hosted the band, but several other visitors who came to downtown Wilmington for the weekend-long concert series.

“Our experience with the first concert was insane. We were on a 59-person waitlist for people that wanted to stay with us. And we couldn’t accommodate some people because we actually had Widespread Panic staying with us … they took basically one whole building, so we had even fewer rooms to rent,” said Kaylie O’Connor, who co-owns the hotel with Robert Rosenberg.

The 15-suite hotel, located in two buildings at 505 N. Second St., is starting to see an uptick in business, she said.

And local leaders envision more jobs, increasing revenues and development to come, all sparked by the amped-up activity and tourism the concerts bring.

“The economic impact of these concerts is dramatic,” Saffo said.

This year is already bringing in big acts such as Lambert, Carlos Santana, 311 and Lady A. The venue so far has 16 upcoming shows on the calendar with performances scheduled as far out as May 2022, according to the schedule as of press time. 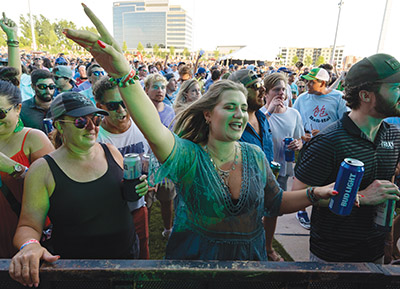 “I know that there were some business owners in town that articulated that the weekend [of Widespread Panic July 16-18] was one of their best weekends ever, even more so than a River Fest or an Azalea Festival or Fourth of July,” said Craig, who is a board member with the Wilmington Area Hospitality Association.
The business is taking advantage of its former top-floor events space to use as a taproom to accommodate more customers coming during the tourist season, and now, show nights.

Staffing availability still is a concern at the brewery and throughout the downtown restaurant scene, she said. And employees are working more hours to keep up with demand from concertgoers.

“There’s definitely been an uptick in sales and need for more labor because of the venue,” she said.
Craig is also board president of the Cape Fear Craft Beer Alliance, which is working to bring local beer to shows.

One thing the alliance is hopeful for is the continued conversation around local craft beer being offered at Live Nation venues Live Oak Bank Pavilion and Greenfield Lake Amphitheater, Craig said.

Beer Barrio owner Hayley Jensen said her North Front Street restaurant is preparing for even more business ahead during weekday concerts and outside the normal tourist season.

And while more out-of-town clientele is coming in from the venue, Jensen hopes to still keep the locals downtown. She said that during the concerts, there’s plenty of restaurants and bars that still could use business.

“I think a lot of locals were avoiding downtown. So then the concertgoers kind of displaced what would have been our normal traffic,” Jensen said. “I just want to make sure that locals know that you don’t hve to avoid downtown just because there’s a show.”

Future impacts of the venue should also translate into even more business and real estate development, Saffo said.

“A lot of our businesses have been concentrated within the CBD [Central Business District] and near the front of Market Street, but I see with this park, the potential for additional businesses to opening up in the Fourth Street corridor, closer to the park, and along the Nutt Street corridor,” Saffo said.

That would also translate to more temporary, part-time and full-time jobs, as well as a boost in gig jobs like for Uber, he said.

“It’s a big game-changer. We’ve seen a dramatic tax base increase in the northern riverfront area … And we’re starting to see a significant transformation of downtown Wilmington to a 24-hour downtown where people are working, people are living and people are playing,” Saffo said.

Another hotel will likely come downtown in the future to offset the wave of concert activity on top of the area’s normal tourism, Saffo said.

For many downtown hotels room rates ran in excess of $400 a night during the weekend of Widespread Panic’s tour.

Such rates, which fluctuate based on demand, are expected to drive up room occupancy tax revenues, the majority of which support beach nourishment with a smaller portion supporting travel and tourism marketing, the Wilmington Convention Center and some beach capital projects.

The business isn’t only going to downtown hotels.

“We are hearing from various lodging properties throughout the county that concertgoers were among the guests staying at their properties,” said Kim Hufham, president and CEO of the New Hanover County Tourism Development Authority, doing business as Wilmington and Beaches CVB. “The new riverfront amphitheater serves to elevate Wilmington’s reputation as a live music/ arts destination.”

The first round of concerts was eye-opening for both businesses and short-term rental owners, said Terry Espy, president of the Downtown Business Alliance.

“We knew it was going to be an asset. But everyone is still figuring out what they are looking at,” Espy said.

“We are getting a ton of interest in downtown Wilmington. Our challenge is we don’t have a lot of space available,” Espy said. “It’s good for the city.”

Developers from out of state are looking to invest in Wilmington, she said. And the city, and its downtown real estate, are becoming even more of a hot market.

Childs expects not only growth beside the concert venue but also in other outlier districts.

“It spreads throughout the city and up in the Northside. I’m very excited for the continued development of North Fourth Street and what that concert venue is going to mean up there. There is just a lot of opportunity,” Childs said.

Downtown Wilmington has been elevated to a new level now, being able to offer the type of national music venue that can bring in largely followed national acts like Widespread Panic, she said.

“Live Nation has really created this tremendous energy and buzz around Riverfront Park,” Childs said. “I think we’re going to see lots more of this ahead.”