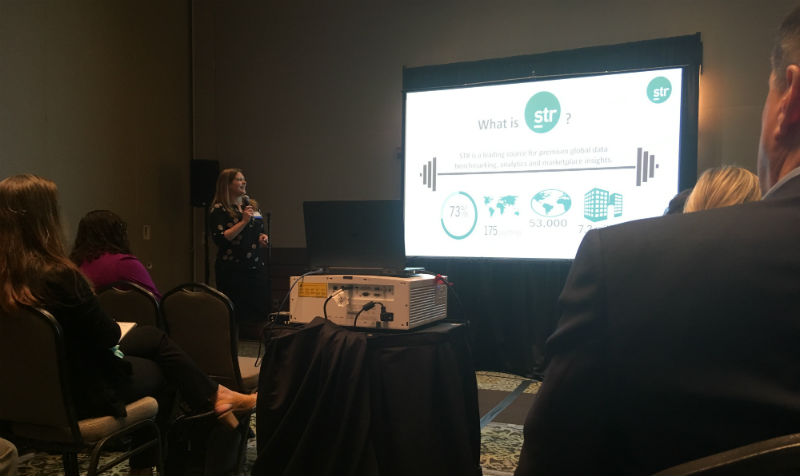 Jennifer Foster was a presenter at the Visit NC 365 Conference in Wilmington, where she shared hotel data trends. (Photo by Johanna Cano)
The eastern North Carolina lodging market has been performing better than the rest of the state over the past 12 months when it comes to room demand growth, revenue and average rental income per occupied room, according to officials who spoke Monday at the Visit North Carolina 365 Conference in Wilmington.

"We really have North Carolina East winning with 8.9 percent demand growth, they are followed right after that by Raleigh,” said Jennifer Foster, business development executive at STR, a hotel industry data firm.

Foster was one of the presenters at the “Shared Lodging to Commercial Lodging” seminar, which examined some of the current trends in the commercial and shared economy lodging sectors.

She was joined by Kellen Kruse, director of business development with AirDNA, which gathers and analyses short-term rental data and Jason Sprenkle, CEO of Key Data, a company that provides vacation rental market data.

Part of that lead can be attributed to Hurricane Florence, when many displaced residents, first responders and workers sought rooms to stay in during and after the storm.

“I think a lot of the growth is [as a result of the storm], from the data I've looked at but not all of it,” said Marlise Taylor, director of research with NC Host, who moderated the seminar. “I looked at data at the beginning of the year and demand was up pretty well before the hurricane, although not as much as after. I do think part of that is the case, but I still think we were having a pretty good year anyway before that.”

Climate conditions play a big role in the lodging industry and STR officials have added climate change, resiliency and the impact of weather-related events on the hotel industry to the list of data it looks at, Foster said.

“When we have a natural disaster or a hurricane or something of that nature, hotels are really acting as the front runner in being able to accommodate evacuees and displaced people and being in the forefront of providing shelter or food,” Foster said. “So, for North Carolina, there was a 10 percent increase in demand based on Hurricane Florence coming through.”

The shared economy lodging sector, including short-term rentals, has also seen an increase nationwide and in the Wilmington region, said Kruse.

As of today, there are about 700 active short-term rentals in Wilmington, more than twice the 200 active rentals three years ago.

“I think Wilmington matches a little bit of the leisure market and also a little bit into the urban market, Kruse said. “What you see here is just the explosion from the last three years.”

Airbnb, an online rental marketplace, dominates in the Wilmington market, with most of the active rentals being listed on its site, he said.

“In Wilmington alone in 2018, there was more than $3 million of revenue generated, which is a huge number,” Kruse said.

The seminar is part of a three-day conference at the Wilmington Convention Center which started Sunday. Visit North Carolina is the tourism marketing arm of the Economic Development Partnership of North Carolina.

"The absolute industry key performance indicators are still strong. Growth is slowing, but it's still a very healthy strong industry," Foster said. "Supply is a concern in certain areas, not overall for the total U.S., but in different areas, it is something to pay attention to."