Up, Up And Away: What's Next For Wilmington International Airport 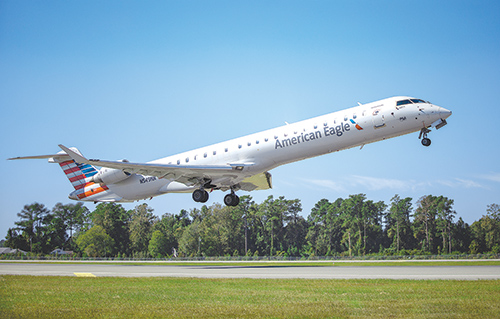 Besides trying to land a third airline or more routes, ILM officials are also building business at the airport. (Photo by Chris Brehmer)

Flight conditions are clear, and business is currently flying at a higher altitude than ever before at Wilmington International Airport.

Airport revenues are up; commercial passenger figures are steady; its business park is growing; and more retail is moving onto the ILM property. Still, officials are continuing efforts to add commercial flights.

“It’s a marathon, it’s not a sprint,” said airport director Julie Wilsey when discussing the growth of the airport.

“Air transportation is always going to be our primary line of business. That’s what we’re known for,” Wilsey said. “But we also realize we have a growing community, and ILM has a wealth of infrastructure, community infrastructure. And we have a lot of space so we said, ‘Why not?’ We should become a business center as well. 23rd Street is a growing area. Castle Hayne is growing.

“With as many entrepreneur companies in town who rely on air service to do their business around the globe, why not have an office right at the airport?”

Earlier this year, ILM became the first airport business park in the country to be certified an AT&T Fiber-Ready facility. That means the business park has access to higher bandwidth for data-intensive services, and network security options.

The airport is also now a magnet site in the recently expanded Foreign Trade Zone #214, which means even more tax benefits for local businesses and manufacturers that are based within the 140-acre business park.

“ILM’s designation as a magnet site provides an extra benefit to companies expanding or relocating to our area that cannot afford to wait months for approval of their FTZ site,” said Carol LeTellier, the airport’s business development director.

Thomas Wolfe, chairman of the New Hanover County Airport Authority, said he thinks the airport is headed in the right direction.

“Long-term planning dictates staff be prepared to execute our growth projections. ILM depends and works very hard to obtain federal and state grants to ensure ILM is up to date in the latest technology, facility infrastructure and the tools to handle a small regional airport serving a million-plus passengers each year,” he said.

The business park already includes a Veterans Affairs outpatient clinic, which has a staff of 260, 84 Lumber and Battle House as well as offices for Wilmington Business Development, National Weather Service and N.C. Forest Service.

Toshiba America will soon be a new tenant in the just-completed, 10,000-square-foot flex space building. Scratch on 23rd, a new restaurant, will open in that structure as well.

“The airport is a natural economic driver in our region, and we are also pleased with their work to create a business park with shovel-ready sites as well as the recent construction of a flex-space building,” Wilmington Chamber of Commerce Chairman Mitch Lamm said.

New for ILM in 2017 is a UNCW graduate student project that will explore and evaluate various strategies for optimizing the airport’s assets and create a plan for the future of ILM Business Park.

The project, under the direction of the university’s Center for Innovation and Entrepreneurship, is expected to begin with student registration in November and commence in full in January.

A recent state report shows that ILM has more than doubled its economic impact in the area over the past four years.

According to the 2016 Economic Impact of Airports in North Carolina report, produced by N.C. State University’s Institute for Transportation Research and Education, ILM will contribute roughly $1.6 billion to the region in 2016.

In 2012, the last time the report was published, the airport provided $641 million in economic impact.

“ILM is our region’s unsung economic development hero. It has come a long way in recent years, and its trajectory into the future is even more exciting,” Wilmington Business Development CEO Scott Satterfield said.

Closer to the runway, there is a flurry of new construction activity.

Live Oak Bank is in the midst of building its own 23,000-square-foot hangar, which is slated to become operational in early 2017.

On the other side of the runway, SeaHawk Aviation has just moved into a new 10,000-square-foot hangar to house its full-service aircraft maintenance facility.

The fight for flights

The only thing that isn’t currently expanding at ILM is its number of commercial flights and carriers.

While Delta and American Airlines, the two commercial carriers at ILM, offer direct flights to Charlotte, New York, Atlanta, Philadelphia and Washington, D.C., adding more routes and a third carrier remain at the top of the to-do list for airport leaders.

“Adding new airlines and new nonstop routes are a priority for ILM. Most low-cost carriers such as Southwest or JetBlue look for a population of 1 million people or more in the MSA,” Wolfe said. “Nevertheless, we attend special industry events to meet with both existing and new airlines.”

Adding airlines is without question the most difficult aspect of Wilsey’s job as airport director.

“First of all, the airlines are in the business of making money,” she said. “They are also very sophisticated. They have data from ticket sales, they have demographic data, and they know a lot about our community and our market and the amount of yield that Wilmington produces.”

A tremendous amount of work and research goes into an airlines decision to open up shop or add routes from an existing location.

“It takes a lot of money to open a new station. It takes millions of dollars to start a new route. So they want to make sure that the business case is there, prior to investing time and planning and capitol and all that it takes to start,” Wilsey said.

“So, we talk with them all the time. We have a consultant who does this professionally, who worked for an airline in a previous career,” she said. “And we take Wilmington’s case to them frequently.”

WHAT'S IN A NAME
Why is the airport code name ILM and not WIL?
Boston’s airport code is BOS, but EWR for Newark? There is a reason for just about every airport code out there. But what about Wilmington? Locations beginning with W or K are only for radio stations east and west of the Mississippi, respectively. So Wilmington becomes ILM and Key West, Florida, is EYW.