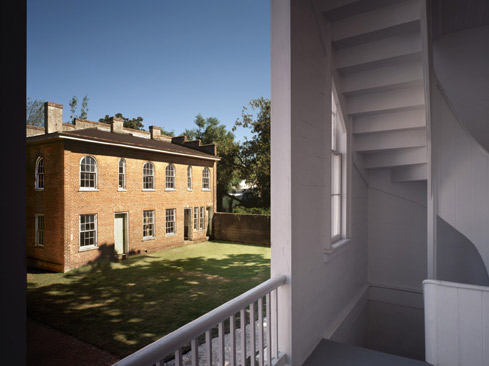 The Bellamy Mansion's original slave quarters (above) is one of a number of buildings and sites in the area included in a new city publication "A Guide to Wilmington's African American Heritage." (Contributed photo)
Thanks to the efforts of area historians, Wilmington’s interesting sites related to African-American heritage have received attention in a new guide, which could help spur interest among visiting history buffs.

Information on local sites will be of interest to people who come to Wilmington looking for material on family or events in African-American history, said local historian Beverly Tetterton who co-edited the project with Janet Seapker.

The guides are available in the local history room at the New Hanover County Library’s downtown branch where visitors often come to do research. The publications are also on hand at City of Wilmington offices, the Bellamy Mansion, the Wilmington and Beaches Convention and Visitors Bureau or online at bit.ly/1hiPLAW.

“It highlights history within our community for those of us who live here and may not know about it,” city spokeswoman Malissa Talbert said. “It coordinates with other efforts to promote awareness of downtown history.”

The guide’s introduction states that it includes religious, educational, social and cultural sites such as:

• Pine Forest Cemetery, 815 16th St., where land was purchased by the city in 1860 to establish a burial site for slaves and free persons of color
• Chestnut Street Presbyterian Church, 712 Chestnut St., which is the oldest black Presbyterian Church (USA) in North Carolina. Built in 1858, it is a combination of Carpenter Gothic and Italianate styles.
• Bellamy Mansion Slave Quarters, 503 Market St., which
was built chiefly by slave and free African-American craftsmen
• Orange Street Landing, Orange and South Water streets –
the location where 22 slaves cast off to freedom. The National Park Service in 2005 inducted the Orange Street location into the National Underground Railroad Network to Freedom Program.

The Orange Street Landing was added to the guide that builds on
previous works by local historians, Tetterton said. The guide was principally based on “Strength Through Struggle” by William M. Reaves and edited by Tetterton, along with other works noted in the publication. There were two other area guides previously.

Tetterton said she hopes new sites will be added as new information comes to light.

The publication offers a self-guided tour with map and addresses.

Carrie Deal, director of sales for the Courtyard by Marriott Wilmington Downtown, said the 124-room hotel is expected to open soon at the corner of Grace and North Second streets.

The six-story, $14 million development will be managed by Greensboro-based CN Hotels Inc. Room rates will range from $209
per night during the week to $229 on the weekends, according to a
company news release.

The hotel will also feature a corporate board room and a business library that will include “several computer terminals, along with a printer and separate computer stations dedicated to solely printing airline boarding passes and checking flight status,” the news release stated.

Deal added the hotel would also include the brand’s signature bar and restaurant component called The Bistro – an eatery that will feature various breakfast and evening items, cocktails, beer and wine and snacks.

“We will be serving breakfast and dinner that will be open to the public and our guests upon opening,” she said. “We are also looking to add lunch as well.”

Valet parking will also be provided to visitors and guests, Deal said.
“We’re considering an option to make it valet parking only,” she said.

“We want to be the Ritz-Carlton of Wilmington.”

Deal said she is working closely with a number of agencies and groups across the region, including the Wilmington Convention Center, to help fill the hotel’s rooms.
- J. Elias O’Neal

For one reason, King was scheduled to speak in Wilmington on the day he was assassinated, according to the local MLK Jr. Celebration Committee, which is organizing a week of events leading up to the annual parade Jan. 20.

The N.C. Aquarium at Fort Fisher also will host one of its two yearly free admission dates on Martin Luther King Jr. Day, according to a press release.

General admission fees will be waived on Jan. 20. The aquarium’ other day is Veterans Day in November.

The program entitled “Always near the front with instruments and tourniquets: The Medical Service at Fort Fisher” will feature historians, authors and re-enactors. It is expected to draw Civil War history
enthusiasts to the area.

The state historic site will also be dedicating a new exhibit called “An Eminent Work of Justice and Charity.” It will include information concerning the care of the soldiers after the war and what was done to heal their wounds, both physical and mental.

The original Second Battle of Fort Fisher, during which the Union Army took control of the fort, took place on Jan. 13-15, 1865. In January 2015, there will be a two-day reenactment event to mark the 150th anniversary.

The 17th annual Cape Fear Model Railroad Society’s Model Railroad Show and Sale was selected as one of Southeast Tourism Society’s top 20 events for the months of January through March, according to a press release from the Wilmington and Beaches Convention & Visitors Bureau.

The event takes place in Wilmington on Jan. 25 and 26 at the American Legion Post 10 at 702 Pine Grove Road.

The other local, annual events highlighted by the Southeast Tourism Society were the N.C. Jazz Festival (Feb. 6-8), the Cape Fear Wildlife Expo (March 14-16) and the Quintiles Wrightsville Beach Marathon (March 15-16).