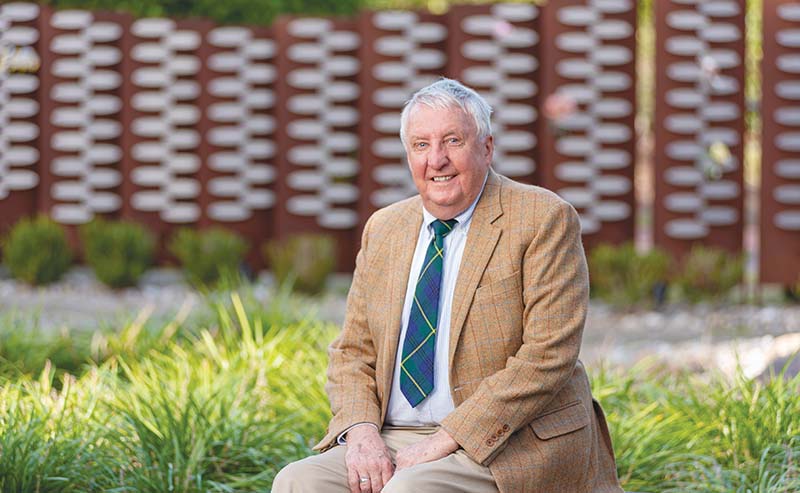 Gottovi, a retired pulmonologist, is honored with this year’s Health Care Heroes Lifetime Achievement Award for his role as one of the founding physicians of the hospice organization that is now known as Lower Cape Fear LifeCare. He led the group that launched the nonprofit in 1980 and became its first board of directors. The fledgling hospice organization cared for its first patient that same year.

“I had taken The Washington Post for many years,” he said recently. “It has a Sunday journal [magazine] section, and it had an article about the first hospice program in the U.S. – in New Haven, Connecticut. I read that article.

“At about the same time, I had a patient who had lung cancer that had spread to the bone. Cancer is very painful when it’s in the bone. He badly wanted to go home, but there was no way for us to do that. We did not have good pain management techniques and no hospice program.”

That was in the mid-1970s, when hospice care in this country, where it existed, consisted of volunteers caring for dying patients, according to MedicineNet.com. The nation’s first official hospice program – the subject of that Washington Post story – was established in 1974 and was based on groundbreaking hospice work in England.

Inspired by what he learned about the Connecticut program and distressed by his patient’s plight, Gottovi realized that Wilmington could benefit from a hospice organization.

Other doctors were interested as well, including James Bryan II, an internist and professor of medicine and social medicine at UNC School of Medicine.

“Jim Bryan was one of my teachers at UNC when I was a resident there,” Gottovi said. “He was very involved with the statewide hospice effort and helped us get off the ground.”

Gottovi scheduled a public meeting at the county health department to discuss the possibility of starting a hospice here. The response was encouraging.

“I was just happy that there was a lot of interest in the community, that people came to that initial show and tell,” he recalled. “The interest was among both medical professionals and laypeople.”

With confirmation of both the need and the community’s support, Gottovi and others formed a steering group. The group eventually got a small grant from United Way of the Cape Fear Area that allowed the program to launch. It hired Eloise Thomas as part-time executive director. By the early ’80s, the hospice effort was off the ground and functioning.

Gottovi was never a physician with the local hospice. His role was to organize and oversee its formation and to chair the original board of directors that prepared it to grow and flourish.

“The whole idea was to provide home care, home support,” he added. “The facility we have now evolved later on.

“We ran training for volunteers to care for people at home. Many were nurses – particularly public health nurses – who were a strong support group. Some [volunteers] had no medical training as such. We taught them how to be with dying patients from various diseases and how to be supportive.”

The pulmonologist’s early work to organize hospice began just a few years after he arrived in Wilmington. Originally from Albion, in western New York, Gottovi earned his medical degree at the University of Rochester School of Medicine and Dentistry.

He and his wife, Karen, moved south where he completed a residency, followed by a fellowship in pulmonology, at UNC Medical Center. The teaching relationship between Chapel Hill and New Hanover County’s hospital pulled him to Wilmington.

“I came here in 1971 to open a practice and contribute to the teaching program at New Hanover,” he said, adding that he was asked to start a program in internal medicine.

He also teamed up with cardiologist Norman Robinson to open a joint practice. Gottovi said Robinson migrated to Wilmington from Chapel Hill at about the same time as he did.

What the two young doctors could not know was that their small practice would be the seed from which Wilmington Health would blossom.

“Wilmington has grown a lot, and Wilmington Health grew as the community grew,” Gottovi said. “At first, we were mostly in internal medicine. When we wanted to hire a new specialist, we would ask local doctors, ‘What are you having to send to Chapel Hill?’ Early on, it was oncology. Then neurology.”

Gottovi retired in 2005 after spending 35 years with Wilmington Health. Then he and Karen moved to Raleigh, where she served as the director of the N.C. DHHS’s Division of Aging. When she retired five years later, Gottovi accepted a position on the medical staff of the Roanoke Chowan Community Health Center in Ahoskie, and the couple moved back to Eastern North Carolina.

“Ahoskie needed help; I ended up working there for five years, doing general internal medicine and some pulmonary medicine,” he said. “I liked what I was doing and could have stayed longer.”

But retirement living called, and in 2015 the Gottovis returned to Wilmington, choosing Carolina Bay at Autumn Hall as their home. These days, the doctor says he spends much of his time reading, from medical information to poetry to meditations to serious fiction.

“I don’t do any medicine except I keep a very expensive subscription to UpToDate, an online medical resource, so I can find and print out information,” he said. “I guess you could say I do consultation about difficult diagnoses for family and friends.”

Read more about all of the 2020 Health Care Heroes finalists here.