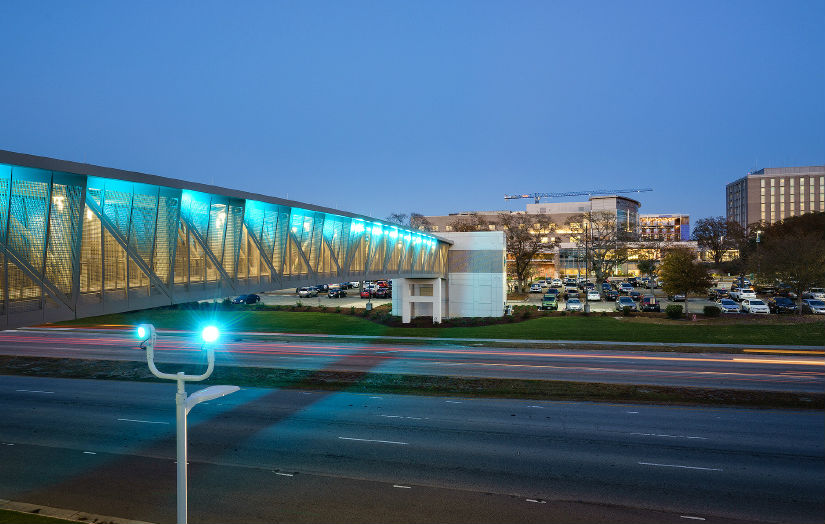 The pedestrian bridge at New Hanover Regional Medical Center's parking garage across from its main campus opened in 2017. (NHRMC photo)

NHRMC will build a parking garage for employees on a South 16th Street site that is currently a surface parking lot, stated NHRMC spokesman Julian March in an email Wednesday.

"In conjunction with that project, we are also planning a second pedestrian bridge to span 17th Street," the email stated. "A new parking garage will open hundreds of additional spaces for employees at our growing 17th Street campus while prioritizing availability of adequate parking close to our doors to better serve patients, families and visitors."

The deck is expected to be built by spring of 2021, March stated, and costs are still being determined.

Three years ago, a pedestrian bridge and parking deck were built across from NHRMC's main campus, 2131 S. 17th St. That project was valued at $18 million.

More than 700 employees were assigned to park in that garage, which opened in December 2017.

NHRMC's latest plans for parking come at a time when its future is under consideration by New Hanover County officials and an advisory group.

The group is made up of 21 people selected from hospital trustees, NHRMC medical staff and the community, and it developed a request for proposals to see who might be interested in a partnership, buying, managing or other deal involving the hospital, which is county-owned.

The group also is researching options for keeping the hospital independently owned.

OPEN LETTER FROM PAG: Where we stand now on NHRMC