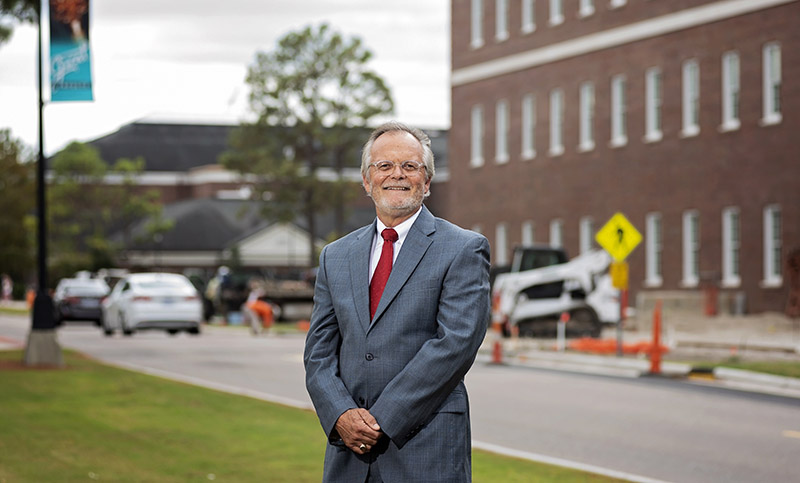 Charlie Hardy, founding dean of the University of North Carolina Wilmington’s College of Health and Human Services, said he’s proud of the new Allied Health building, Veterans Hall, under construction on UNCW’s campus. (Photo by Michael Cline Spencer)
Geographically speaking, Charles Hardy’s journey from his boyhood home near Kinston to the dean’s office at UNCW’s College of Health and Human Services has not been far, but a world of experience lies between.

Hardy grew up on a tobacco farm but was motivated to attend college – the first person in his family to do so.

“All I ever wanted to do was to get out of Kinston and into the big city,” he said. “Education changed my life and opened up a world I didn’t know existed.”

Earning his bachelor’s degree at East Carolina University and his master’s in exercise science at the University of Tennessee Knoxville, Hardy went on to Louisiana State University for a Ph.D. in kinesiology and psychology. He then became a post-doctoral research fellow in the Department of Exercise and Sport Science at the University of North Carolina at Chapel Hill, which led to a tenured faculty position there. It was a heady time, working in what he describes as a “vibrant landscape that constantly challenged you to seek knowledge and share knowledge.”

The education he thought might help him escape the rural South ultimately led Hardy to a career helping rural and medically underserved communities.

The first step in that career was a phone call Hardy received 11 years ago at Chapel Hill. Officials with Georgia Southern University, located in rural eastern Georgia, invited him to become chair of the school’s Department of Health and Kinesiology.

“I grew and learned a lot about myself,” he said of his rise through the university’s administration. “I made a lot of mistakes, but with some good mentors, I grew.”

After serving as associate dean of Georgia Southern’s College of Health and Human Services and as dean of the college of graduate studies, Hardy in 2006 was tapped to be professor and founding dean of the university’s Jiann-Ping Hsu College of Public Health.

As he began the task of building a college from the ground up, Hardy contacted his colleagues around the country for advice.

University of North Carolina Wilmington received approval to establish a College of Health and Human Services in 2009, following a study of UNCW’s health-related programs undertaken by former Chancellor Rosemary DePaolo’s administration. When the college got up and running a year later under an interim head, UNCW advertised for a founding dean, and Hardy applied. He took the helm of the new college in 2011.

Since the college’s founding, enrollment in its programs has been on the rise. Hardy said that 2010 saw 391 students graduate from UNCW’s health-related programs; this year, that number was 1,365. Total CHHS enrollment currently is 4,290, up from 1,598 in 2010.

Currently, the CHHS has a fulltime faculty of 130; total employees number 263.

Demand for a variety of healthand social services-related professionals has driven these increases, but so has the high quality of UNCW’s programs, according to Hardy. And additional degree programs are on the way in response to that demand.

“We are adding a doctor of nursing practice program, a master of science in athletic training and a master of science in health care administration,” he said. “We are preparing to launch a baccalaureate in respiratory therapy. Over the next three to five years we are going to be developing programs in the therapies – physical, occupational, speech and audiology – as well as public health, nutrition and dietetics and physician-assistant studies.”

These programs in the pipeline reflect continuing unmet demand for services, Hardy said.

“Our area is growing, [creating] a greater demand for our students, for all our majors as they graduate,” he said.

There is also a need for applied research, to find answers to complex, enduring problems, Hardy said. Undertaking collaborative efforts to do so throughout Southeastern North Carolina is part of CHHS’s mission.

“These problems are not amenable to one profession solving them. We have to combine forces,” he said. “It’s very rewarding to see the number of agencies reaching out to us, asking for help in solving problems.”

Hardy sees these entities moving to a new focus on addressing the social determinants of health, rather than just trying to cure sick individuals.

“If we put our commitment and attention to promoting healthful behaviors, protecting communities and populations and preventing disease, it would be amazing,” he said. “I see us moving in that direction.”

Asked what he is proudest of, Hardy cites the culture he and his colleagues have created in the college.

“We’re focused on building a team and respecting that everybody has something to offer to this team,” he said.

Hardy said he’s also proud “of the productivity of our faculty, and I would not be honest if I didn’t say I was proud of that new [$67 million Allied Health] building going up. That is going to transform what we are able to do with our community members.”

Hardy said that it’s been a “true blessing” to come back to Eastern North Carolina to pursue the goal of what DePaolo called “destination health.” He says he is extremely grateful.

“It’s been hard work, but I worked in the tobacco fields, so I am no stranger to hard work,” he said with a smile. “When you are doing something you just know is in your DNA and in your social learning history, it seems so natural. We are doing some good work, and UNCW has a heck of a reputation. When people ask, ‘How’s it going?’ my response is that I am living the dream.”