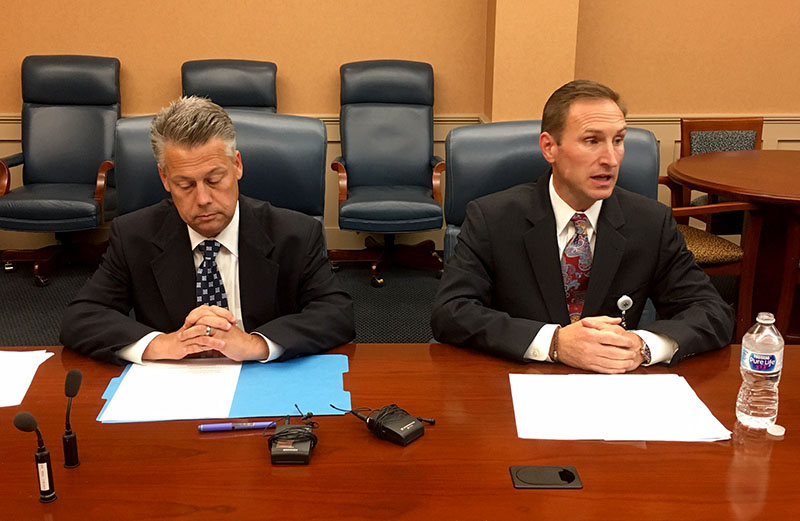 After a decade of steady growth in revenues and services, the not-for-profit system that is the region’s largest employer wants to solicit bids to decide whether it makes sense to change ownership.

To take the first step, however, the county-owned hospital, which opened in 1967, has to have approval from county commissioners.

At the commissioners’ Sept. 3 meeting, the board will vote on a “Resolution of Intent to Sell,” according to a news release from county and hospital officials.

“If the resolution is approved by a majority of Commissioners, the county, in cooperation with NHRMC leadership, will develop a Request for Proposal (RFP) based on community priorities that will be distributed nationwide,” the joint release stated.

Asked Tuesday about their initial thoughts on the September vote, commissioners Pat Kusek, Woody White and Julia Olson-Boseman said they would vote to move ahead to develop an RFP. Chairman Jonathan Barfield Jr. and Commissioner Rob Zapple said they wanted to talk more with residents about concerns before stating how they would vote.

New Hanover County Manager County Manager Chris Coudriet said during a briefing with reporters Tuesday afternoon that despite the resolution's title, a decision to move forward did not automatically mean a sale was certain.

"Instead it would be a decision to explore what possibilities are out there for health care in our community," he said during an afternoon briefing with reporters. "No decisions about the future of New Hanover Regional Medical Center have been made."

If the process does end in a sell, proceeds would go to New Hanover County.

He pointed to areas that could benefit from sale proceeds including funds for public schools, affordable housing, health equity and small business and entrepreneurship development as some examples.

"I say all of that to note that any revenue from the sale of the hospital would be reinvested into New Hanover County to help all of our residents and our businesses thrive for generations to come," Coudriet said.

“If approved, the selection of a new owner and execution of an agreement could take more than a year,” the release stated. “Hospital system services, providers, and employees will continue daily operations without interruption while these discussions occur, and there will be no change in how residents access care.”

In 2011, concerns over retaining local control of the hospital scuttled a plan for Charlotte-based Carolinas HealthCare System (now called Atrium Health) to manage NHRMC’s daily operations. Under that proposal, Carolinas HealthCare System would have held a management contract – not be a new owner – but several administrators, including then-President and CEO Jack Barto, would have become its employees.

County commissioners voted 4-1 against the move, citing concerns about the potential for it to lead to a sale of the hospital. Barfield was the lone vote in favor of that proposal. He remains the only one on the current board from back then. He said Tuesday he supported that measure because it was focused just on management and not ownership.

The decision to pursue a potential new owner now, NHRMC President and CEO John Gizdic said, comes as hospital officials look at the future health care needs for the area as well as the changing industry.

In the past decade, NHRMC has invested over $1 billion in facilities and equipment, he pointed out, adding that the health system has remained financially strong during that time. In that time, the system’s employee count has increased to 7,000 and without layoffs. (Read more here from WilmingtonBiz Magazine about how and why NHRMC has grown in the past decade.)

Looking ahead to the area’s projected population increases, Gizdic said, it’s uncertain if the health system could sustain on its own the type of growth it has seen and meet the coming needs. He also said that if NHRMC were going to negotiate with a potential buyer, now would be the time, when the health system has strengths to leverage because it is not struggling financially.

"As NHRMC looks to the future, it’s clear more resources are needed to invest in the people, technology and services that can make better health and wellness a reality. But inevitable changes and disruption in the healthcare industry will require NHRMC and the county to consider new ways to support the investments that can make a difference," states an info website the hospital and county launched Tuesday on the issue.

Without the separate physician group and ACO factored in, the hospital’s annual operating revenue crossed the $1 billion mark last year for the first time, up 64% from 2011, according to its financial reports. And in the tri-county area, NHRMC holds 78.7% of the market share when it comes to inpatient care, as of 2017, according to a hospital report. That level of dominance could make it attractive to other health care systems during a time when health care mergers and acquisition activity nationwide has been trending up since a spike in 2017.

Those deals include both for-profit buyers such as Nashville-based HCA Healthcare, which earlier this year closed on a $1.5 billion purchase of Mission Health in Asheville, and not-for-profit but still large players such as Atrium Health, which in April announced plans for a merger agreement with Wake Forest Baptist and Wake Forest University.

“The decision on whether to consider new ownership comes as changes in the healthcare industry are leading more health systems to explore creative solutions,” officials said in Tuesday’s release.

Gizdic, who informed hospital employees Tuesday about the news, said that NHRMC is the third-largest county-owned hospital left in the country. The two larger ones receive local tax subsidies.

Though NHRMC does not pay property taxes as a not-for-profit, New Hanover County does not send tax money the hospital’s way for operations.

In recent years, the health system has focused on certain strategies such as investing in outpatient and ambulatory care services, emphasizing overall community health and addressing health equity, among other issues. Those types of priorities, along with areas such as charity care policies and the physician group that includes more than 280 providers, would be specifics that could be outlined in the RFP or negotiated in deal talks.

"Any potential partner that we would ever consider seriously, in my mind, would be based on how they would not only retain all of our employees but how they would grow and develop such a great workforce," Gizdic said.

In some ways the continuation of key priorities could be more important than a sales price, Gizdic said, adding that a team would work on the RFP details with community and employee input if the Sept. 3 vote backs that move.

County officials already have scheduled public meetings ahead of the Sept. 3 vote and said that if the process moves forward after that vote, other public hearings would be held.

"We're not under a crisis situation, and so we want to make sure this is an extremely important decision," Gizdic said. "It would be the largest decision in the history of our organization and so making sure we take our time and evaluate this process very thoughtfully, very deliberately, to end up with the right answer versus a quick answer, I think is much more important."