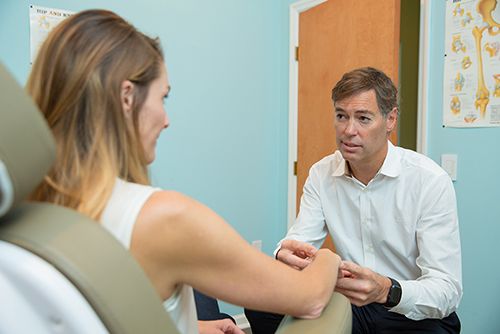 The orthopedic sports surgeon and regenerative orthopedist is also a husband, dad and self-described “motocross and surfing athlete,” who likes to keep an eye on the most up-to-date techniques in his profession.

“I am most excited about discovering the simplest, most natural, least invasive and most efficacious cellular- and molecular-based treatment options for patients to keep them doing what they love,” Yeargan said.

At his practice, Regenerative Medicine Clinic at 5725 Oleander Drive, he uses techniques he has brought to the rapidly expanding field of regenerative medicine and orthobiologics.

“Our techniques harvest, concentrate and deploy the body’s own cells for healing.
Specifically, we offer patients suffering from chronic, debilitating and often immobilizing joint pain with an alternative to traditional bone and joint surgery, including total joint replacement,” Yeargan said. “We have developed techniques that surgeons across the country and the world have successfully duplicated, confirming the efficacy of the treatments.”

His interest in this type of treatment was rooted in an early memory.

“When I was 14, I was an elite-level soccer player and contest surfer,” said the Raleigh native. “I broke my tibia at a soccer tournament in the spring, just after receiving a new surfboard for my birthday. When the long leg cast came off in August, my knee wouldn’t bend, and the limb was atrophied. Ever since then, I’ve had it in the back of my mind how ridiculous it was that modern medicine couldn’t make my leg heal faster or keep my knee from becoming stiff.”

He was introduced to the field by the Dan Eglinton, who practiced in Asheville.
Yeargan said Eglinton was the first nationally to use biologics in orthopedic surgery for hip avascular necrosis.

After receiving his science degree in chemistry at the University of North Carolina at Chapel Hill in 1993, Yeargan attended the East Carolina University School of Medicine. He completed his general surgery internship and orthopedic surgery residency at the University of Hawaii, spending six months each at the Tripler Army Medical Center and Shriners Hospital for Children.

During his time in Hawaii, he gained additional expertise through two years of clinical and bench research, focusing on cellular and molecular level changes in thermal capsulorrhaphy and cartilage injury.

Yeargan then completed a sports medicine, adult shoulder, elbow and knee fellowship with additional hand training at The Steadman Clinic in Vail, Colorado.

During Yeargan’s fellowship, he worked with players on several professional sports teams, including the Colorado Rockies, Denver Broncos, Denver Nuggets and the U.S. ski and snowboard teams. (More recently, Yeargan has served as a team doctor for local high schools.)

“When I returned to North Carolina in 2009, I was the first surgeon in the country to use a patient’s own stem cells in combination with shoulder surgery, and I witnessed firsthand the positive effects,” Yeargan said. “The results were extraordinary, and it was then that I realized that there was about to be a massive paradigm shift in medicine.”

He said he didn’t necessarily make a conscious decision to pursue regenerative medicine.

“I just found that I had become a regenerative orthopedic surgeon. I was so excited to read and study immunology. I think this was the biggest advancement in my knowledge base, when I realized the potential for cellular technology to dismantle human disease, as we know it,” he said.

In 2010, Yeargan introduced stem cell treatment to the area.

“Thanks to new ultrasound technology and instrumentation, we have been able to narrow our focus to office procedures that are minimally invasive and can be done through a tiny, 2 [millimeter] incision and with little recovery time,” he said.

He said that in some settings, genetic screening, nutrition counseling and lifestyle management planning may be offered.

“All of our procedures are non-operative. Our flagship procedure is the mesenchymal signaling cell concentrate that involves harvest and processing of nucleated stem cells, dendritic cells, immune cells, endothelial cells and pericytes.” Yeargan said.
“Bone marrow is taken easily and virtually painlessly from the pelvic crest with the patient seated comfortably. Once collected, the isopycnic separator produces three distinct layers that are processed in a proprietary fashion before administration at the target site.”

The procedure “may be just as valuable in a 14-year-old with a cartilage injury as it is to an 87-year-old grandmother with gonarthrosis who just wants pain relief,” he added.

Human cells work by signaling, Yeargan said. “We think of it like medicinal signaling cells. Signaling cells respond to the environment so just the right amount of substrate will be produced by the cell until ultimately being shut down by natural feedback loops,” he said.

“Biologics are ideal when combined with the percutaneous Tenex procedure for tendinitis and tendinosis in most locations and contribute to the effectiveness of the procedure,” Yeargan said.

The clinic’s Proprietary Platelet Rich Plasma procedure, or PRP+, is used to treat acute injuries primarily. It can be used for pain in areas ranging from joints to the face.

MI-EYE is camera-in-needle technology that also can be performed routinely in the office. It allows full view of the joint space for diagnosis without having to undergo an MRI, and injection procedures can be performed at the same time without changing the portal, Yeargan said.

The clinic serves about 500 patients annually.