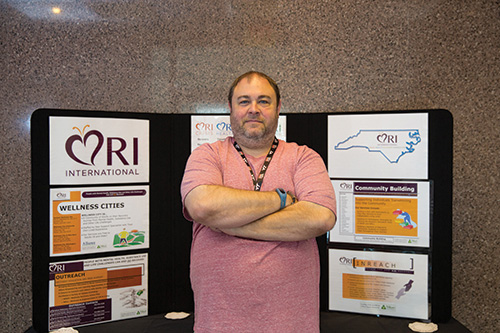 Kris Ludacer is program director of Wilmington Wellness City, a partnership between Trillium Health Resources and RI International that is fully funded by Trillium and housed at 1960 S. 17th St. (Photo by Chris Brehmer)
Since Trillium Health Resources formed nearly two years ago, the specialty care manager has rolled out numerous programs for individuals with substance use, mental illness and intellectual and developmental disabilities in 24 counties in eastern North Carolina, including the Wilmington area.

As far back as 2001, the N.C. General Assembly had developed a blueprint for change in the way those services were delivered, aimed at consolidating area programs into local management entities like Trillium.

Since its inception, Trillium has “developed a lot of efficiencies in the way services are delivered,” said Cindy Ehlers, vice president of clinical operations for Trillium.

Some of those efficiencies came from pooling resources and using those resources for greater leverage, she said.

The change “has created a more robust network of provider organizations to deliver those services using evidence-based practices and making sure that people are getting the right service in the right amount when they need it. So if you need a crisis service, that’s what you’ll get; if you need ongoing treatment, that’s what you’ll get,” Ehlers said.

In the past, Trillium officials have been able to create and expand programs with savings. Locally, they include Wilmington Wellness City, a free program for those working on addiction and mental health issues where classes are run by trained peers; an inclusive playground at the Hampstead Kiwanis Park; and an expansion of outpatient therapy and mobile crisis management services, among others.

In May, Trillium received about $400,000 to help address an opioid addiction epidemic that seems to have hit North Carolina and the Wilmington area particularly hard.

But despite the good news, the organization this year is facing a future diagnosis that is troubling to Trillium officials – an anticipated cut in state funding that Ehlers said would mean services expansion and creation will halt in New Hanover County and beyond.

Over the past two years, the cuts amounted to the need for Trillium to use $40 million in reserves, according to an early proposal of the organization’s 2017-18 budget plan.
Trillium’s proposed budget for fiscal year 2017-18 totals nearly $463 million. As of press time, the state’s latest proposed budget cuts nearly $16 million for Trillium over the document’s two-year period, $11 million the first year and $5.6 million the second.

The previous cuts in state funding to Trillium and other LMEs were made in the hopes that the LMEs would spend the money on services rather than using them to grow their reserves, Sen. Harry Brown, R-Onslow, said in a News & Observer story earlier this year.

Wilmington Wellness City, a partnership between Trillium and RI International that is fully funded by Trillium, celebrated a grand opening in January at 1960 S. 17th St. in Wilmington, a much larger location from the previous one-room space the program operated out of at The Harrelson Center downtown.

Getting more people who are recovering from addiction or mental illnesses to use the service means getting the word out about Wilmington’s location, said Kris Ludacer, program director of Wilmington Wellness City.

That also means “having people stop by to see the facility and just kind of take a tour. One of the things I think people aren’t realizing is we don’t infringe on anyone else’s services. We are an additional support, and we’re free to anybody over the age of 18. It doesn’t matter what insurance you have; it doesn’t matter what level of service you’re getting from another provider,” Ludacer said.

Potential funding cuts from the state could affect Wellness City locations, including in Wilmington, New Bern and Greenville, officials said.

Ludacer said one of the main impacts could be an overflow of people who need the free help because they can’t pay for other sources, although he said the Wilmington Wellness City would try to accommodate everyone.

Another potential Trillium initiative, in partnership with Healing Place of Louisville, Kentucky, could be on hold for New Hanover County because of funding cuts. Trillium’s board of directors will need to make a decision about the future of the project, Ehlers said.

“They’ll probably not make that decision for several months. We’re certainly going to have lots of conversations about other options for the community and our stakeholders,” she said.

Trillium had announced last year that a recovery and treatment center, expected to be built near New Hanover Regional Medical Center in Wilmington, would have included 25 designated beds for individuals who would have otherwise been incarcerated at the New Hanover County Jail.

The county was going to contribute about $319,000 a year for three years, while Trillium would have spent $9 million for the design, construction and startup costs.

What would be called Healing Place of Southeastern North Carolina would address addiction problems.

“It keeps those people from going to jail or the emergency room and instead gets them engaged in treatment,” Ehlers said.

Meanwhile, other services could be in jeopardy because of the state budget, which had not been finalized as of press time June 22.

“Trillium spent $40 million of our savings in the last two years to continue services for people. In the next two years, we anticipate having to spend all of the remaining fund balance that we have, and we will run out before the next budget cycle,” Ehlers said.