AAIPharma To Expand In Wilmington 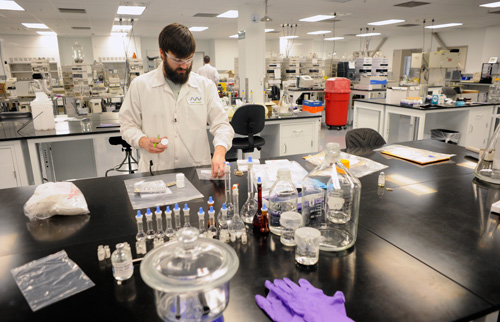 AAIPharma's lab in Wilmington, shown in 2012. (File photo)
A contract drug development company with multiple locations across the country has decided on Wilmington for its upcoming expansion, investing $15.8 million in additional space for lab operations and corporate offices, Gov. Pat McCrory announced Friday.

AAIPharma Services Corp./Cambridge Major Laboratories Inc.’s expansion is expected to result in an additional 37 local jobs over the next three years, according to a news release.

In all, a total of 50 jobs and $20 million in new investment are projected to be added by the end of the project in 2019, the release stated.

Earlier this year, Wilmington and New Hanover County officials voted to give the company up to $500,000 in performance-based incentives over five years if it picked Wilmington for its expansion.

The firm will receive a grant from the One North Carolina Fund for up to $50,000 if it meets hiring and capital spending targets in the next three years, the release stated, adding that the state’s community college system also is making free, customized training available to its new workers.

“The company considered other locations around the country before choosing Wilmington, where it will add scientists, data specialists, instrument specialists and other employees to its staff. Wages will vary by position, but total annual compensation (wages plus bonuses and benefits) for the new workers will average no less than $77,000,” the release stated.

AAIPharma has operated in Wilmington for the past 30 years, and AAIPharma/CML, formed in 2013 when AAIPharma and CML joined together, currently employs nearly 400 workers at three sites here.

Jonathan Barfield, chairman of the New Hanover County Board of Commissioners, said in the release that the expansion underscores the importance of supporting existing businesses.

The company’s expertise spans pharmaceutical development, analytical and manufacturing services for every stage of drug development. In addition to its sites in Wilmington, the company has operations in Durham, N.C., as well as Missouri, New Jersey, South Carolina, Wisconsin and Weert, The Netherlands. Its company-wide workforce totals about 830.

“We appreciate this opportunity to work with city, state and county governments to bring more jobs to the Wilmington area and contribute to the growth of life sciences in the area,” said Stephan Kutzer, CEO, president and chairman of AAIPharma Services/Cambridge Major Laboratories.

Scott Satterfield, Wilmington Business Development CEO, said the announcement is the culmination of months of work bringing the necessary leaders to the table and embracing the opportunities that come with a major corporate expansion.

“In a project like this, there are a lot of moving parts,” Satterfield said in the release. “Our job is to make sure those parts move together smoothly and efficiently. WBD is proud to support AAIPharma/CML’s long-term growth plans, along with other exciting projects we have on the horizon.”

Dickson McLean, chairman of Wilmington Business Development, said in the announcement Friday, “AAIPharma/CML’s expansion is central to the larger story of Wilmington’s emergence as a destination for biotechnology."

The release said AAIPharma/CML's growth mirrors that of another Wilmington-headquartered company, PPD Inc., which employs about 1,600 locally.

Once complete, AAIPharma/CML’s expanded presence is expected to add $16.8 million to the Wilmington area's gross regional product, according to an economic impact assessment by the University of North Carolina Wilmington’s Swain Center for Business and Economic Services, the release said.