A Wave Of Woes 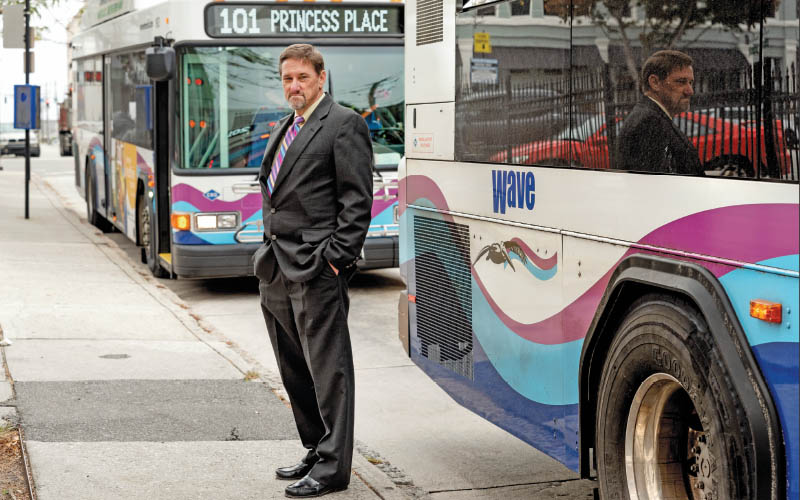 The Wilmington Multimodal Transportation Center (WMMTC) will give a new face and new home on North Third Street for bus services downtown and will replace the current transfer station at Second and Princess streets. Wave officials said they expect a certificate of occupancy by the end of the year and plan to open in January.

About 98% of the funding came from federal and state sources with almost $78,000 in local funds contributed for a match.

And in November, Wave kicked off the first ride of its new downtown Port City Trolley, serviced by trolleys bought for about $900,000.

But while these projects mark major milestones for the Cape Fear Public Transportation Authority, which does business as Wave Transit, the agency is facing an estimated $775,000 budget shortfall this fiscal year and has been undergoing scrutiny over its finances and declining ridership.

On top of the financial woes, New Hanover County, one of the key local players involved in Wave Transit, is backing out.

Albert Eby, executive director of the Cape Fear Public Transportation Authority, said there are many financial factors that have led Wave Transit to the financial state it is in today.

Wave Transit has seen revenue reductions from its federal and state sources, including a federal alternative fuels tax credit for its compressed natural gas buses, which is no longer offered by the federal government and has resulted in six-figure losses, he said.

The public transportation agency has been seeking help and direction from its government entities.

“We’ve been trying for a year to have these conversations about what led us to where we are now. This is an urgent situation,” Eby said.

The Cape Fear Public Transportation Authority formed in 2004, established through an interlocal agreement between New Hanover County and the city of Wilmington, which merged the former transportation entities run separately by the city and the county.

It employs 130 people and has about $4 million in annual salaries.

But that number reflects a ridership that has been steadily declining over the years.

The ridership issue, along with Wave Transit’s finances, were among topics considered at a New Hanover County Board of Commissioners meeting last month, when a majority of commissioners voted to deny Wave Transit extra funding to help with budget issues this fiscal year.

In October, the same three commissioners – Woody White, Pat Kusek and Julia Olson-Boseman – voted to pull out of the interlocal agreement, citing concerns about funding, ridership and planning.

White, in a statement released following the October decision, said he does support public transit in densely populated areas but believes it does not make sense in outlying areas to fund routes that few people ride.

“If Wave had better leadership and guidance, they would re-invent themselves and innovate to maximize the more popular routes, lower wait times, and make the product they deliver more user-friendly and marketable. [Public transit] will always be in need of some government subsidy where it makes sense and supports the elderly and vulnerable,” White said.

The withdrawal would not take effect until July 2021, said Jessica Loeper, the county’s chief communications officer.

The commissioners’ decision does not have a direct impact on the current services of Wave, she said.

The county has already funded Wave in this year’s budget and “will similarly fund Wave again in next year’s budget,” said Loeper.

New Hanover County allocated nearly $331,000 in funding for Wave Transit in its FY 2019-20 budget, which began July 1, while the city of Wilmington’s budget this fiscal year included more than $1.4 million.

The Wilmington and New Hanover County contributions are a small portion of the Cape Fear Public Transportation Authority’s nearly $8.9 million budget for FY 2019-20, which is up from $8.8 million the previous year.

The publicly funded agency receives revenues from federal, state and local sources as well as service fares. But fares alone aren’t enough to support the agency.

Wave’s budget largely depends on federal assistance it receives on an annual basis. All federal funding sources are subject to variations with changes to legislation and are allocated on a reimbursement schedule, said Megan Matheny, the authority’s deputy director.

Wave Transit also receives separate funds for capital projects, like the WMMTC, which require a local match and can’t be used for operating revenues, she said.

The revenue reductions from its federal and state sources, on top of increases in expenses due to liability and health insurance, have led to the estimated $775,000 shortfall this fiscal year.

To bridge the gap this year, Wave has proposed a reduction in its service hours, but those changes have yet to be adopted by Wave’s board. The agency also decided not to fill a $65,000 position that was vacant.

But that still does not resolve the funding deficit, so Wave has proposed supplemental appropriations of more than $326,000 from its local funding partners.

The proposed changes and supplemental funds could help with more than $500,000 of the shortfall. The remaining would come from the fund balance.

The majority of Wave’s supplemental request is $250,000 from the city of Wilmington and $57,000 from New Hanover County.

Leland Town Council also made a decision last month not to grant Wave’s request. Other entities, including the city of Wilmington, have not made a decision.

“We still got to get through this situation, and hopefully we will by the end of the year, but we’ve got a bigger situation to discuss next year,” Eby said.

Without a dedicated source of funding, however, that future will remain unclear. There have been some proposed additional sources, including adding a $7 cost to vehicle registrations. But the county and the city have differing opinions on who legally can implement such a fee.

“The board is looking at reducing service hours. But moving forward, if resources don’t come in, you will see the elimination of routes that would allow Wave to operate within what’s in its coffer, so to speak,” said Jonathan Barfield, who sits on Wave’s board and is also a New Hanover County commissioner.

“We’re still working to try to figure out how we react to it long term,” he said. “Our goal is to make sure we provide the services to meet the needs of the community.”