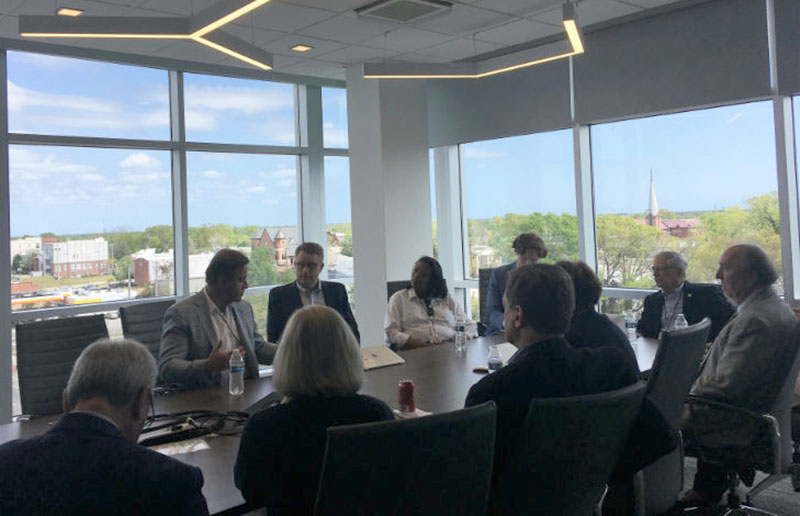 City leaders and Apiture president Christopher Cox had a Q&A session at Apiture's office downtown Wilmington Thursday as part of new initiative to connect with local business community. (Photo by Johanna Cano)
Wilmington City Council and city leaders visited Wilmington-based KWIPPED Inc. and Apiture on Thursday as part of an initiative to learn about area businesses and start conversations on how local government and the business community can collaborate.

Two main focuses of the visit were how both entities can partner to attract more skilled workers to Wilmington and how the council can help startups looking to raise capital.

The idea to start this initiative, which is first focusing on the tech sector, began about a year ago when city executive staff visited local tech startups as part of its “Future Cities” team, said Tony McEwen, assistant to the Wilmington city manager for legislative affairs.

“The point was made there that it would be a great idea if council were able to more regularly interface with these types of companies, especially some of our most innovative companies that obviously are highly sought after,” McEwen said.

City council can hopefully utilize the information garnered from Thursday’s and future visits and use it to promote economic development in Wilmington, McEwen said.

In its first of a series of such visits Thursday, city council stopped in at local tech startup KWIPPED, a B2B equipment rental and leasing online marketplace.

Access to capital is critical for a startup like KWIPPED to become a successful company, Preville said during the visit.

Large venture capital firms are starting to look outside of large markets like New York and California for investments and looking into smaller markets that have companies in the traded sector, Preville said.

City council can help startups in Wilmington by marketing the city as an attractive place for VC firms, he said.

Of the visit, Preville said in an email that this new initiative is exciting for businesses like KWIPPED.

“With several tech startups experiencing growth and success, Wilmington’s tech scene is gaining momentum. City Council’s interest to collaborate and align the public sector with local tech startups is a great sign that we can keep the momentum going,” Preville said. “Wilmington already has so much to offer in terms of quality of life, as our tech scene and job opportunities continue to expand, we’re poised to become a legitimate tech hub. “

In a Q&A session with Apiture, president Christopher Cox said the city should market Wilmington as a tech hub to attract talent and other fintech companies to the region.

“As we try to recruit technology talent, when we talk to people outside of the region, usually the person's response is ‘Wilmington, North Carolina, it never even crossed my mind.' People don't have a negative or positive opinion; they just don't think about it,” Cox said. “Somehow we have to proactively build awareness.”

Out of the 100 employees at Apiture, 30 of them are University of North Carolina Wilmington graduates, and 10 are UNCW interns, Cox said.

“We have people from our team who travel around the country to see clients and partners and we have partners who come here and see us, and the limited number of direct flights makes things a little bit difficult,” Cox said.

Apiture officials should keep city leaders and officials in the loop about the destinations that would best serve them to be able to pitch it to airlines, English said.

Wilmington Mayor Bill Saffo said one of the main takeaways from the visit Thursday is that quality of life is important for talent recruitment.

“The thing that I saw was there was a lot of people that have moved here from different parts of the country. But we're not a brand name out there, and we need to do a better job in branding our community as a place to open up a business, especially a tech business,” Saffo said. “We should enhance our quality of life through trails and of course the music scene that we have that is expanding.”

The council will work on getting the word out that Wilmington is a good place to do business, Saffo said.

“Startup businesses are critically important because those people want to be here,” Saffo said. “Most of them are from this area or they moved to this area and want to start a business. From a business of maybe 10 or 20 people, it could possibly expand to 100, 200, 500 or a thousand people.”