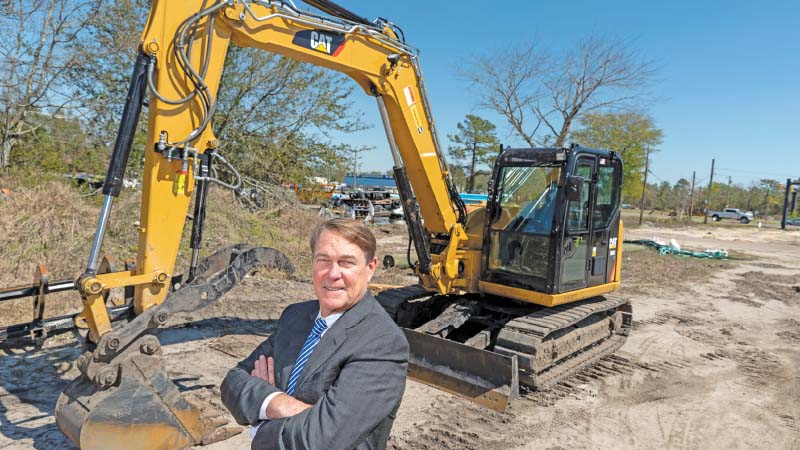 Ryal Tayloe, an attorney with Ward and Smith who has represented plaintiffs in Map Act lawsuits, is shown at one of the Military Cutoff Road and Market Street construction sites for the Military Cutoff Extension project. (Photo by Michael Cline Spencer)
It’s been nearly three years since lawmakers rescinded the Map Act, but the law’s effects are still being felt by property owners in 2019, remaining the subject of litigation throughout the state, including in the Cape Fear region.

According to the N.C. Department of Transportation, as of January this year, there were 399 lawsuits involving the Map Act. As of April 4, 30 of the remaining cases were in Pender County, two in New Hanover County and none in Brunswick County.

Enacted in 1987, the Map Act allowed the NCDOT to record maps of future corridors with the aim of limiting development on land that would be needed for those transportation changes. Rescinding the Map Act in 2016 placed a moratorium on new corridor maps being created by the NCDOT.

One family’s Map Act cases in Wilmington date back to before 2005, when a highway map was recorded for the Military Cutoff Extension project that wouldn’t be funded until a decade later. The two cases involving the Nixon family’s Market Street property were resolved last year, with the N.C. Department of Transportation being required to pay an additional $4.8 million (for a total of over $12 million in compensation) to the Nixon family as a settlement for the map’s impact on their Market Street property, according to judgments recorded by the New Hanover County Register of Deeds.

Ryal Tayloe, a Wilmington attorney with Ward and Smith who represented the Nixon family in the Map Act cases and other cases against the NCDOT, explained the problem.

Tayloe said the Nixon property felt the impact of the Map Act even before 2005.

“As soon as they started talking about developing the property, the highway department said, ‘OK, we’re thinking about doing this Military Cutoff Extension,’ and then that led up to the recording of the map,” Tayloe said. “And then, the way the Map Act worked, once they put that map on record, you couldn’t do anything within the corridor of where the highway was going to be – almost all of the Nixon property [21 of 24 acres] in this instance.”

The only way to get around it, he said, was to apply for a development permit and then wait three years. After three years, the law required NCDOT to either buy the property or allow the proposed development.

“The problem with that is, the city of Wilmington required a full engineered development plan to include with the application for the permit approvals, and that was going to cost thousands and thousands of dollars to get an engineer to study the property and prepare design drawings for any sort of development,” Tayloe said.

“They weren’t willing to do that, and on top of that, why would you do any kind of commercial or other development when you know it’s just going to be a temporary thing, when they say a highway’s coming … It would just make no sense for anyone to develop a piece of commercial property where you’re going to lease to a tenant, and the tenant’s going to say, ‘Why would I want to establish my brand and footprint here when I’m going to have to move at some point in time in the future?’”

The NCDOT has argued that the restrictions of the Map Act were temporary and did not actually take the properties involved.

“I kind of understand a little bit of the thinking behind the Map Act, but the problem was, it appears to me, that the Department of Transportation got an inch and took a mile from the legislature because there were many of these instances where they said, ‘This is where we’re going to put a highway eventually,’ but had no prospect of getting it funded in the near term,” Tayloe said. “It’s just not right.”

What property owners are finding and what lawyers have been investigating is that there have been no sales of consequence in the corridors affected by recorded maps, Tayloe said.

In a Forsyth County case involving the Winston-Salem Northern Beltway, in an order finding for the plaintiffs against the NCDOT, Superior Court Judge John O. Craig III stated in his conclusions, “The nature of the interest taken from the Plaintiffs must be assessed based not on what NCDOT actually did, but what NCDOT acquired the right to do ... The Map Act’s restrictions left Plaintiffs with nothing more than barren rights in their land and a bare fee to the land within the corridor covered by the restrictions ... Furthermore, despite legislative action in 2016 indicating the restrictions were rescinded, the former restrictions continue to cast a pall over the affected properties.”

In June 2016, the N.C. Supreme Court unanimously found in favor of the plaintiffs in another Forsyth County case, Kirby v. NCDOT, a decision that was hailed as a victory for property owners’ rights.

Russell Weil, the property manager of a 684-acre tract owned by Jamestown Pender LP in Hampstead, explained some of the impact the Map Act has had on the owners of the land he oversees.

“The property has 1,700 feet of road frontage along Highway 17 just north of Topsail Middle School and then expands back to the border of the Holly Ridge Game Preserve and the Castle Bay Golf Course property. When purchased in 2006, Jamestown had concrete plans to do a mixed-use development along Highway 17 to include retail and office space that would have been a gateway into a spacious residential community in the back,” Weil said in an email. “This project would have been a boon to Hampstead and Pender County, resulting in significant additional tax revenue. It soon became apparent that DOT planned to construct a highway through the very middle of the property, thwarting Jamestown’s plans.”

He said once the corridor protection map for the Hampstead Bypass was recorded in 2011, “it was impossible to develop or sell the property. Jamestown sued DOT in 2014 for inverse condemnation seeking just compensation for this taking by DOT.

DOT has fought Jamestown every step of the way and has done everything it can to delay the litigation process.

“I don’t wish to comment further as the litigation is ongoing and apparently will be for some time to come.”

Last year, a Cameron family land company sued the state because of the impact a corridor map for the Hampstead Bypass project has had on about 1,800 acres on Sidbury Road in Wilmington, according to a complaint that was filed in New Hanover County Superior Court.

Sidbury Land & Timber LLC filed the complaint against NCDOT and N.C. Turnpike Authority, alleging that the map for the U.S. 17 Hampstead Bypass project “froze” the property and “prohibited its development, improvement and subdivision,” interfering with the firm’s property rights and causing a decrease in the land’s fair market value during a nearly five-year period.

The NCDOT in an answer to the lawsuit, which has been lumped in with similar cases and assigned to a judge outside of New Hanover County, stated that the department specifically denies “that all such restrictions under the Map Act are compensable. It is specifically denied that the Plaintiff is entitled to recover any amount from NCDOT in this action for alleged but denied claims under the U.S. Constitution or N.C. Constitution.”

The Hampstead Bypass, which would cross through Sidbury Road land, will connect Interstate 140 in Brunswick County to U.S. 17 north of Hampstead, with construction scheduled to start in the fall of 2020.

The Sidbury Land & Timber property, at 7200 Sidbury Road, 7700 Sidbury Road and 8350 Farm Road, is zoned residential in a county where developable land is dwindling but demand for homes is on the rise. Members of the Cameron family, which has created major developments throughout the region, are managers of Sidbury Land & Timber LLC, according to state records. According to the Sidbury complaint, “The impact of the recorded Corridor Map was to render the entire Property undevelopable and unmarketable for its highest and best from November 22, 2011 (i.e., the date the Corridor Map was recorded in the New Hanover County Registry) to on or after July 11, 2016 (i.e., the time the North Carolina General Assembly enacted legislation rescinding all transportation corridor maps and requiring their cancellation of record).”

The lawsuit says Sidbury Land & Timber is entitled to recover just compensation, all interest and other costs and expenses. It also says the state agencies should be “required to produce a composite map showing the entire property and the land taken, encumbered and damaged by its unconstitutional and inverse temporary taking no later than ninety (90) days from the date it files an answer to this Complaint or such time as the court may so order.”

Legislators also enacted a law that reduced the legal interest rate that could be paid in condemnation cases from 8 percent to the prime lending rate with a cap of 8 percent.

“The interest rate in this case should be the interest rate in effect on the date of taking, to wit, on November 22, 2011, not the current interest rate provided” in the amended law, the Sidbury complaint states in one of its claims for relief. Applying a lower rate, the complaint says, violates the Equal Protection Clause of the Fourteenth Amendment of the U.S. Constitution.

In the end, the fact that several roadways have been funded and in some cases, such as the Military Cutoff Extension project, are under construction, is a good thing for the area, Tayloe said, “even though it’s been a bit of a nightmare for these property owners who have been under the clouds of this corridor protection map all these many years.”

Editor's note: This version has been changed from the print edition with updated lawsuit numbers and a comment from NCDOT.