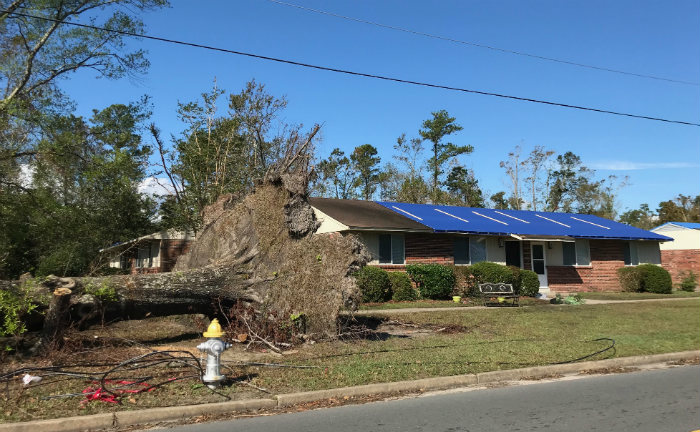 “One of the key priorities for us right now really has to do with housing recovery. We want to try and get people back into their homes as quickly as possible,” said Beth Schrader, chief strategy officer with New Hanover County and office recovery manager.

In October, New Hanover County opened a Hurricane Recovery Coordination Office to coordinate data policy development and priority setting for the use of state and federal recovery funding, according to a news release.

While the office doesn’t have specific numbers on how many people are still out of their New Hanover County homes because of the hurricane, which struck in September, officials do know that about 1,200 low- to moderate-income housing units and 22 mobile homes were lost or severely damaged in the hurricane.

“We don't necessarily have very accurate numbers as to how many children and families are totally impacted,” Schrader said. “We do know, with conversations with the school system, that we have seen a dramatic increase in the number of McKinney-Vento children.”

“We know that that has gone from about a thousand, which is sort of their normal amount, up to as many as 1,700,” she said.

As of last week, 89 people in the FEMA Transitional Sheltering Assistance (TSA) program were still living in hotels, Schrader said.

The office is currently on a time crunch to find housing for those in hotels because the TSA program has a limit of 170 days and as of Thursday, it’s been 157 days post-storm.

“We've been working to coordinate with FEMA to bring in trailers as quickly as possible,” Schrader said. “We really want to get folks alternate housing options before that benefit runs out.”

For those that did not completely lose their homes, the coordination office has been doing direct outreach to affected homeowners who were eligible for FEMA’s Sheltering and Temporary Essential Power Program (STEP), which coordinates with local government to provide free essential repairs to homes.

“It brings the condition of the home up to a safe, secure and sanitary condition,” she said. “It doesn’t restore the home back to what it was before, but it makes it possible for a family to live in it so that they can get back to a little bit more of normalcy.”

FEMA has approved $54 million to be used for the STEP program in the state and the funds are set to be used for project management, repair materials and construction contracts, according to a news release Wednesday.

State contractors and two volunteer organizations started work last week on 12 houses eligible to be repaired with the help of the STEP program.

The coordination office also plans on working on a permanent replacement housing development.

“Usually about a year after a storm, community development block grant disaster recovery funding becomes available and it's our hope that we will be able to utilize those funds in order to increase the overall number of affordable housing units that will be available in New Hanover County,” she said.

The office worked with a contractor to get reimbursement for county expenditures, which the county recently received $9.5 million from FEMA earlier this month as reimbursement related to debris removal.

“We've been intimately involved with the after-action review and really holding a mirror up to take a very honest look at the things that we did,” Schrader said.

The report noted that in the areas of communication, operations, resources, staffing and training during the storm, the county needs improvements.

The report, prepared by the county's Office of Strategy, stated that a clear communication plan for employees with roles, expectations and employee sheltering plans should be created prior to a disaster. Because some shelters had structural damage during the storm, the county should implement a strategy to reinforce the structural integrity of critical buildings.

The report also noted that fuel and generators were a top priority in the county, and there should be enough supplies to sustain the community for seven to 10 days.

“A lot went really well in this storm, but there were still opportunities to improve,” Schrader said. “So, it’s important to have a very honest dialogue both within the organization and then with more than 40 partners and outside agencies and our business partners about what could have gone better and enrolling and engaging them in finding those solutions and documenting them.”

While the coordination office is focused on recovery, it is also working on better preparing the county if a future storm were to hit.

“Not only do we want to see us come back to where we were, we actually want to really help move the needle, and resilience is a key component of that,” Schrader said. “Part of being resilient is ensuring that we're better prepared and that has to do with building back to higher standards.”